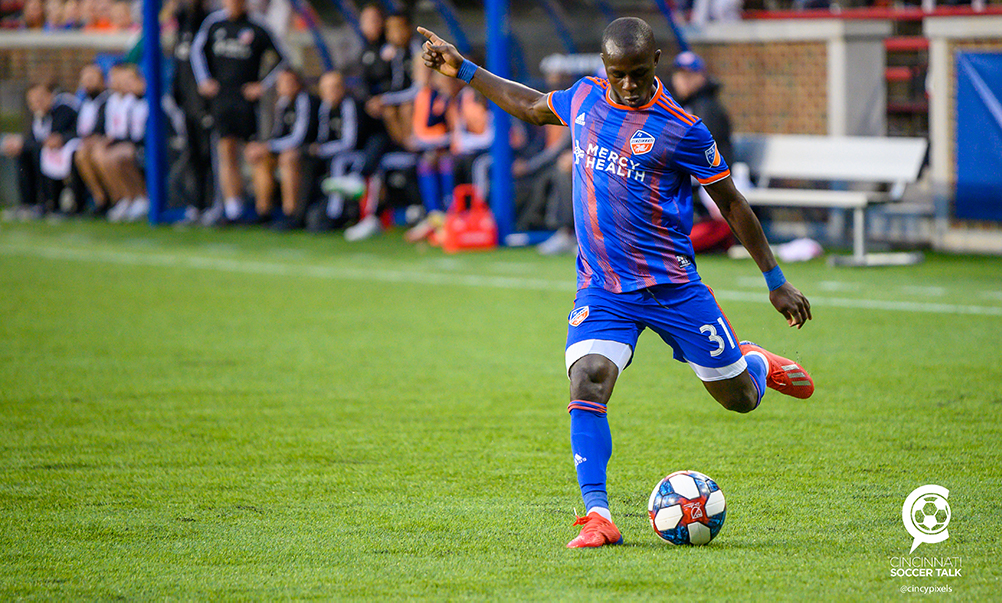 A Sam Fink header late in second-half stoppage time lifted St. Louis FC to a 1-0 victory Wednesday over FC Cincinnati in the U.S. Open Cup Round of 16.

Saint Louis FC had been working on a goal for most of Wednesday’s U.S. Open Cup Round of 16 match with FC Cincinnati. Late in second-half stoppage time, the goal finally came.

Sam Fink headed home a corner kick just as extra time seemed inevitable to lift Saint Louis to a 1-0 victory over the Orange and Blue at World Wide Technology Soccer Park. FC Cincinnati’s brief USOC stay comes to an end, while Saint Louis moves on to the quarterfinal round July 10 at Atlanta United.

The cup run for Saint Louis is not unlike the one FC Cincinnati made in 2017. After taking down the Chicago Fire last week, Saint Louis knocked off an MLS side for the second time in nine days. The USOC loss marks the first for FC Cincinnati at the hands of a lower division team.

Saint Louis forwards Russell Cicerone and Kadeem Dacres caused their former club plenty of trouble in the final third, and in the first 16 minutes, the Orange and Blue nearly fell behind 2-0. Przemyslaw Tyton kept the club in the game with several saves.

Saint Louis kept FC Cincinnati on its back heel in retreat for most of the half. FC Cincinnati had 62% of possession but managed just one shot on goal in each half.

In the 44th minute, Victor Ulloa stuck with the ball in a crowd of Saint Louis defenders and got a shot off from the top of the box, but Tomas Gomez collected it easily.

At halftime, interim coach Yoann Damet switched from a 4-3-3 formation to a 4-4-2, and FC Cincinnati slowly came to life in the second half. Kekuta Manneh was busy down the left flank against former FC Cincinnati defender Matt Bahner.

In the 58th minute, Manneh rounded Bahner, but the connection was off on a cross intended for Fanendo Adi.

The biggest opportunity for the Orange and Blue came in the 82nd minute. Fink mishandled a pass back to Gomez, and Adi had a one-on-one chance with the keeper. Gomez stuck his hand in to swat the ball away and disrupt the chance.

Adi left injured as stoppage time began, and with FC Cincinnati out of substitutions unless the game reached extra time, the club played on with 10 men.

In the second minute of stoppage time, Cicerone fired a shot from 20 yards out, but Tyton made a diving save that set up the winning corner kick.