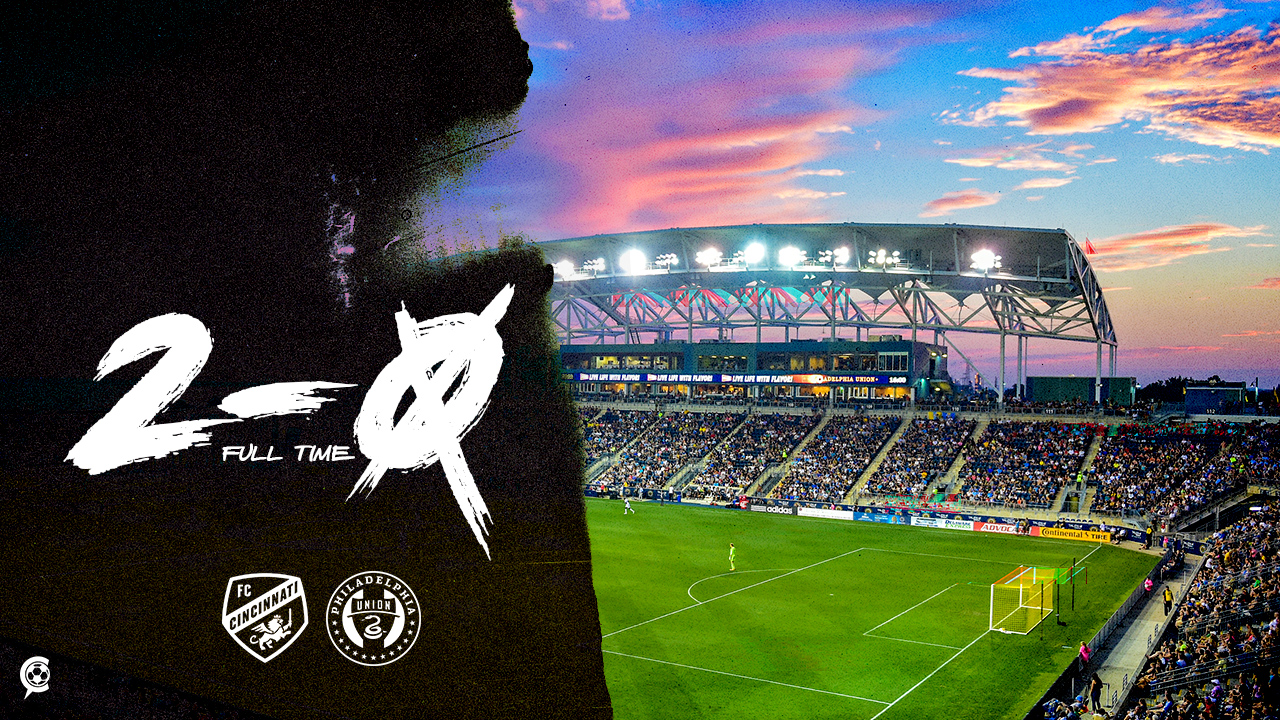 FC Cincinnati extends their winless streak to 6 matches after falling 2-0 to the Philadelphia Union on Wednesday night.

FC Cincinnati’s winless streak extends to six matches with a 2-0 loss Wednesday night to the Philadelphia Union at Talen Energy Stadium in Chester, Pennsylvania. Philadelphia’s Kacper Przybylko secured the game-winner in the 64th-minute sending FC Cincinnati home without any points on its East coast swing.

Alan Koch made wholesale changes with only five players starting from Saturday’s lineup in New York. Spencer Richey was back tending the net while the biggest surprise starters were Eric Alexander and Caleb Stanko, both making their second starts of the year. Darren Mattocks was back up top with Allan Cruz and Roland Lamah patroling the wings. Missing from the eighteen was FC Cincinnati’s start striker Fanendo Adi, he was still listed as not being match fit.

Unlike the previous meeting that was played under hurricane type conditions, this game was played under nice conditions where the weather had no impact. The change in personnel also changed the tactics that FC Cincinnati implemented, unlike the frequently used double pivot Eric Alexander appeared to play in a single pivot trying to spring Bertone and Caleb Stanko wide. However, the Union neutralized this plan with their athletic ability. The Union was able to find the channels and create a number of chances, which ended with 20 shots and 8 on goal. Pressure forced Cincinnati’s midfield to play deeper which made it hard to release that pressure by getting forward.

The biggest positive from the night was the play of Spencer Richey.  Yes conceding two goals is not a great statistic for goalkeepers but on this night Spencer did everything in his power to keep this scoreline respectable. Richey made a number of eye-popping saves starting in the 19th minute when Union’s Kacper Przybylko headed a cross from Fafa Picault on goal that Richey parried away. Richey was under constant pressure but commanded the box on corners and crosses.

One of Cincinnati’s best scoring opportunity’s came in the ninth minute off a corner. Bertone sent a short corner that found Nick Hagglund who was able to poke the ball toward the Union’s net. However, Matt Freese was able to deflect the ball wide and in the process appeared to injure himself forcing the Union to substitute on Carlos Miguel in the 41st minute.

The Union doubled their lead four minutes after Przybylko put the first goal on the board. Ilsinho was able to split FCC’s defense and get Fafa Picault into the box. Richey quickly came out to cut the angle down but as soon as Spencer went to the ground Picault calmly chipped the ball into the back of the net. Any hope Cincinnati had of escaping with a point was quickly doused.

FCC’s scoreless drought extends to 411 minutes and 565 minutes without a goal from open play. Yep, this is the same update after the last game but we might as well keep track at this point. The team is struggling to find the back of the net.

The struggles FC Cincinnati is having must beg the questions. What does Koch do to fix this? This is not a team issue solved just by having Adi back.  We are struggling to build from the back, the ball is cleared and comes right back down.  A team built on transition has to be able to transition from defense to offense, but that change from defense to offense is not occurring. Regardless if Adi returns the team needs to learn how to change modes quickly.

The follow up burning question, is Koch feeling some heat? The sheer number of challenges the Orange and Blue are having is worrisome even if it is the early stage of the season. It is not just scoring but defending, maintaining possession, spacing and creating big chances.  Some of this is from the composition of the roster but that was built with Koch’s input. There are not many positives to take away from the past month and Alan has to be feeling a little uncomfortable. After the match, Koch said FC Cincinnati needs new players and Luke and the staff is working on that goal.