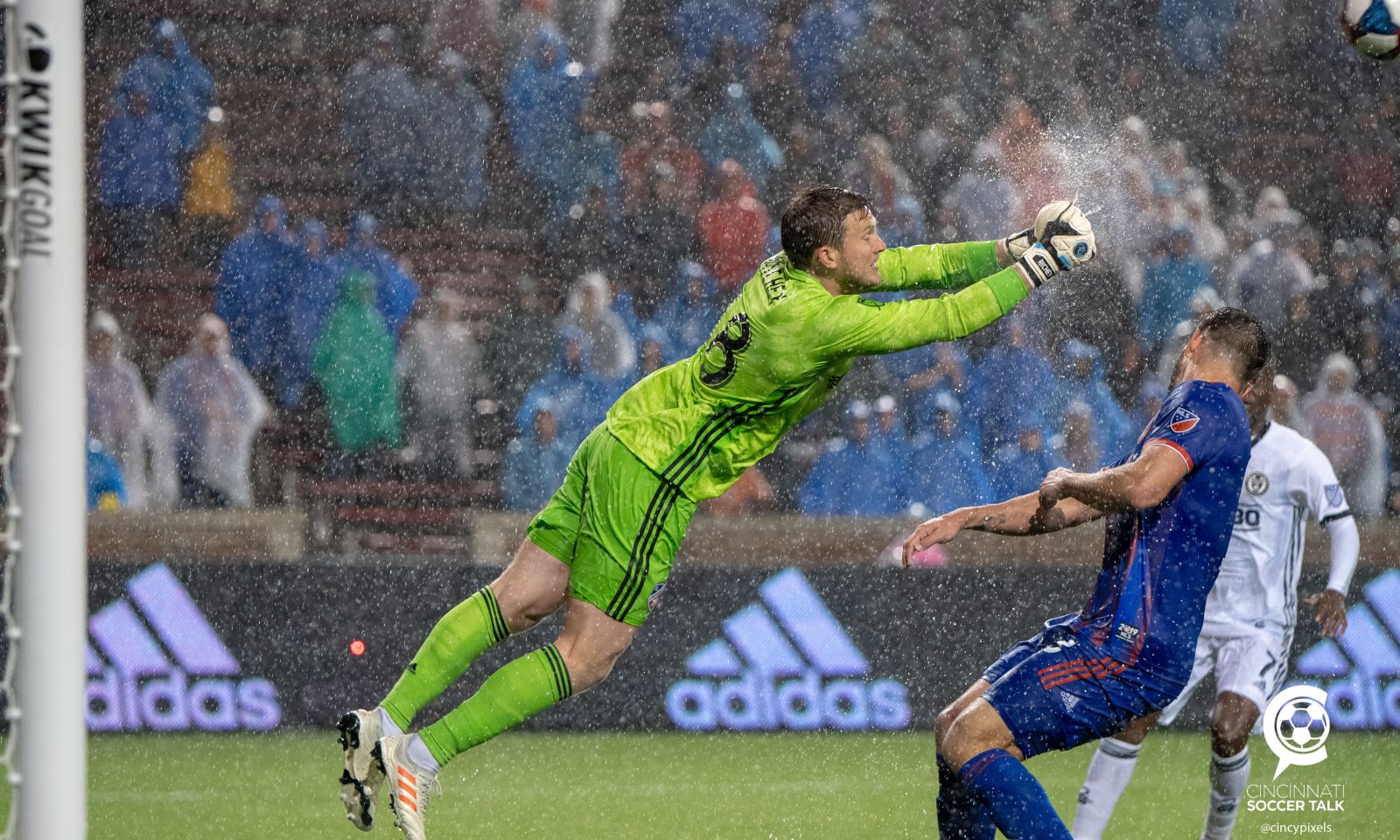 MILFORD — Spencer Richey realizes fame can be fleeting for a goalkeeper in MLS. He also knows that his starting spot for FC Cincinnati is a week to week venture, now that Polish international Przemyslaw Tyton is nearly match fit after a hamstring injury.

But it’s one thing to have the physical attributes to man the net at the highest levels of pro soccer, and it’s quite another to possess the mental fortitude to handle both the positive and negative moments and pressures inherent in the job. Richey can manage it all.

“Probably got that from my dad,” he says. “There was a lot of tough love.”

Richey got his share of tough love after the 63rd minute of a match against Sporting Kansas City on April 7 at Nippert Stadium. With three points seemingly in hand for FCC, Richey had a miscommunication with defender Greg Garza, came well off his line and watched as KC’s Gianluca Busio tucked the equalizer comfortably into the net for a 1-1 draw.

Richey deflected the criticism on social media, tweeting “the goal was on me”. The following week, he responded in the best manner a keeper can, making a career-high five saves in a 2-0 loss at red-hot Los Angeles FC.

“One thing I’ve learned over the past five years, whether it’s USL or MLS, the gap for me between the leagues is the mental gap,” Richey said. “Once you can overcome the pressure and the implications of the game, it allows you to perform to your full ability.”

Richey wasn’t expected to be the starting keeper for FCC’s inaugural MLS season, but when Tyton went down with hamstring tendonitis, the window of opportunity opened for the 26-year-old Seattle native who so far has made six appearances and posted a 2-2-2 record.

Regardless of Tyton’s condition, one could argue that Richey has earned the right to keep his spot.

Richey’s then career-high three saves and a clean sheet against the Portland Timbers earned him a spot on the MLS Team of the Week. He also had three saves in a 1-1 draw at Atlanta. The loss against Philadelphia ended his scoreless minutes streak.

Richey endeared himself to FCC fans while on loan from Vancouver last season with an 11-1-2 record, a .650 save percentage, a 1.29 goals against average and four shutouts in the club’s final season in the USL, helping lead them to the regular season championship.

All that’s well and good, but it doesn’t change the fact that Richey has the 6-foot-6 Tyton breathing down his neck.

“I’m not stupid, I know there’s pressure to perform well,” Richey said. “I know Titi’s coming back healthy and Alan has some decisions to make going forward. I’m not naïve.”

In the Goalkeeper Union, as position coach Jack Stern likes to call it, competition is spirited. Richey is learning from Tyton, and Tyton likewise. The relationship between the two is growing by the week, especially with Tyton training fully again.

“Titi’s a really good guy, he’s a funny guy,” Richey said. “His distribution is really good, his composure. Now that he’s healthy, there are things I can pick up from him. That’s what makes it fun. The Goalkeeper Union is kind of a tight-knit group. We’re training alongside one another every day. We have a fun, respectful training environment. At the same time, we’re competing for the starting job. It’s positive.”

At the same time, Tyton’s physical attributes are obvious, as is the breadth of his international experience. When he was acquired in December, Tyton, who wasn’t immediately available for comment on Tuesday, was projected to be FCC’s starting keeper, and he made five saves in a season-opening 4-1 loss at Seattle before the hamstring injury.

Tyton made 15 appearances over two seasons for La Liga club Deportivo. He also was a starter for Stuttgart in Bundesliga. Tyton has 14 career caps for the Polish national team and made three appearances for the country when they hosted the 2012 UEFA European Championships.

While Tyton’s reinsertion to the starting role seems imminent, coach Alan Koch indicated on Tuesday that he’s still not quite 100% fit for a full 90 minutes. But as Tyton progresses toward that point, the decision for Koch will get more difficult.

Until he’s told differently, Richey is preparing each week as the starter, all the while keeping his head in the right place.