The 2-0 loss to Supporter’s Shield favorites Los Angeles FC over the weekend provided both positives and negatives for Alan Koch to use during this week’s training sessions. Letting in two goals (one off of a set piece and one in 2nd half stoppage time) to a team in LAFC that has an XG differential of +8.61 is nothing to lose sleep over.

However, FC Cincinnati required several key saves from Spencer Richey and a host of wasted opportunities from the likes of Diego Rossi and company to get out of The Banc with a respectable scoreline.

Koch chose to give Victor Ulloa a rest and opted to hand Caleb Stanko is first MLS start of the season. Stanko’s effort was admirable, and his 8 ball recoveries, 6 tackles, and 3 interceptions is a reasonable stat line for a midfielder. For comparison, Leonardo Bertone was credited for 6 recoveries, 1 tackle, and 1 interception. However, the partnership between the Stanko and Bertone showed real signs of trouble, and the midfield duo was caught out of position several times throughout the match. 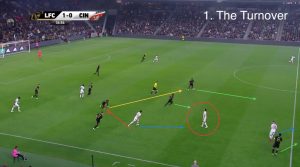 This big chance from the 35th minute is a good example of this. Mathieu Deplagne is pushed forward from his left back position when he turns the ball over. Stanko has correctly shifted over to cover Deplagne’s position. Bertone is in the center of the pitch just off camera. The LAFC team immediately looked to break through, while Stanko and Deplagne turned to recover. (Side note: Kenny Saief chose to cast a frustrated look toward the heavens rather than look to win the ball back. Not helpful, but also not the focus of this article.) 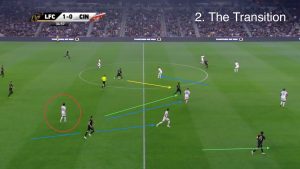 As FCC transitions from offense to defense Stanko chooses to track the run of Latif Blessing through the center of the pitch. Bertone moves to confront the ball. The immediate impact of these decisions leaves Bertone too far away from the ball to win it back or prevent a penetrating pass, Stanko a step behind Blessing as he bursts through the midfield and receives the ball, and Carlos Vela wide open on the right flank.

(Side note: Kenny Saief still really unhappy, and really not helping in transition defense.) Deplagne is working to get back but has a long way to go. 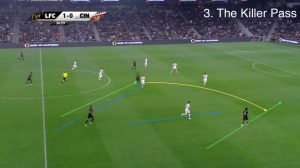 The ball is easily played past Bertone into the feet of Blessing who takes it in stride with Stanko on his hip. As Deplagne struggles to recover Blessing is able to find Vela wide open on the FC Cincinnati flank. 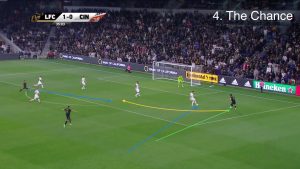 Vela carries the ball into the box and finds Diego Rossi cutting through the box to the penalty spot. Luckily, Rossi wastes the chance and the orange and blue were able to remain down only a goal.

This crisis was averted due to uncharacteristically poor finishing from Rossi, but the gaps in the FCC midfield remained, and LAFC continued to exploit them.

This chance from the 57th minute shows that FCC wasn’t just vulnerable on the break. 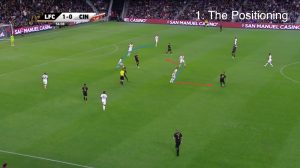 Eduard Atuesta is on the ball and Bertone fails to get close enough to him to prevent a penetrating pass. Stanko is even with Bertone and thus provides no depth to the midfield.

Atuesta easily plays the ball into Vela, who has peeled off the FCC back line. With one pass both Bertone and Stanko are taken out of the play. Vela turns and has the time and space to dissect the defense. He finds Rossi, who sends his shot wastefully over the bar. 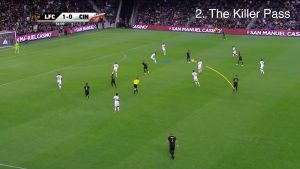 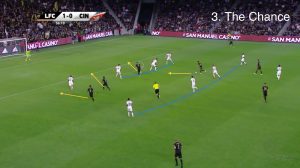 Were Caleb Stanko and Leonardo Bertone poor on Saturday? I hardly think so. After all, LAFC still created chances after Victor Ulloa subbed on for Stanko in the 76th minute. However, after reviewing the key moments of the match above, and a host of others (see the gallery below) I was left with the distinct feeling that coach Alan Koch will be working on his double pivot in the center of the FC Cincinnati lineup. Something to review leading up to Friday’s match against Real Salt Lake. 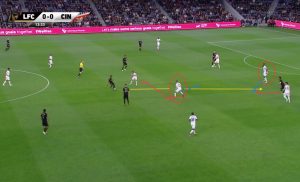 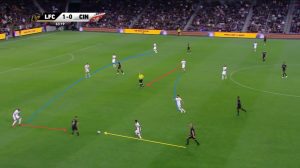 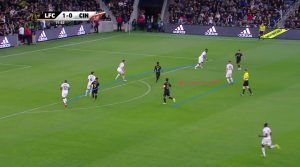 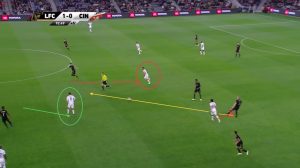 Brad Gough is the technical director of the Northern Kentucky Soccer Academy.