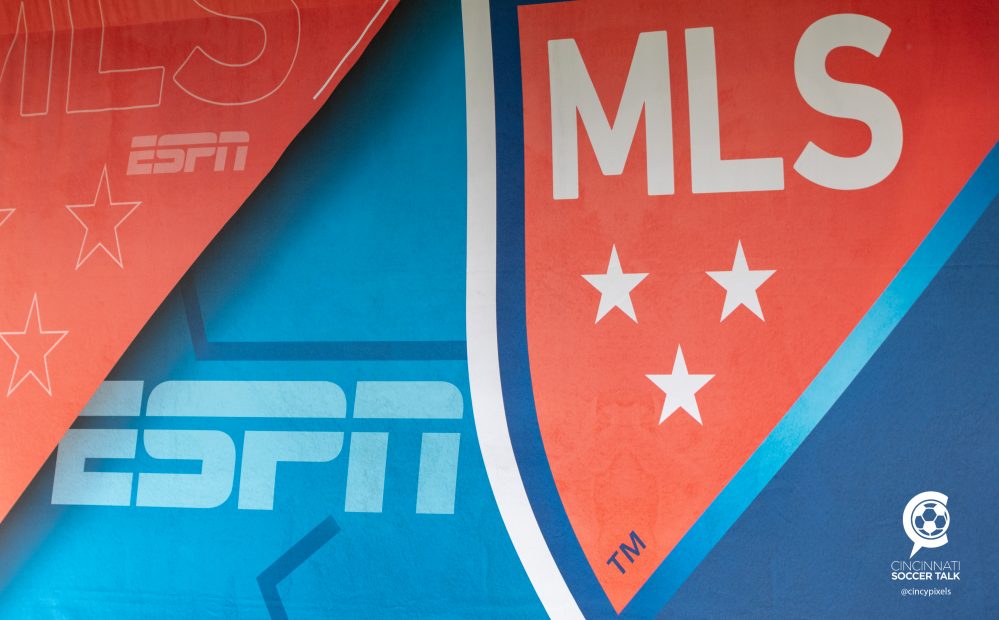 Compared to other expansion sides, FC Cincinnati is ahead of the curve in terms of their first six matches of the season. FCC has 8 points and the average for an expansion side is 6.83 points.

FC Cincinnati is six matches into their first season in the MLS and is doing much better than some people originally thought they would. Pundits all around the league thought FCC would be the bottom tier of the league immediately, and wouldn’t be able to get any wins in their tough first stretch of matches. However, FCC sits above the playoff line and the schedule has not been as difficult as many originally thought. We at Cincinnati Soccer Talk thought it would be a fun exercise to compare FCC’s start to the season with every other expansion side and see how it stacks up.

The Chicago Fire started in the 1998 season, two years after the MLS began. They are the only expansion team to win the double, winning both the U.S. Open Cup and MLS Cup, and were coached by Bob Bradley. They began the season getting to two victories to give them six points. Both of these wins were against the Dallas Burn, now FC Dallas. Despite this great start, they lost their next four matches. They finished their six-match start at six points but did end the season second in the Western Conference.

The Miami Fusion began in the same season as the Chicago Fire but did not have as good a season. They began the season with two losses, including one against, guess who, the Chicago Fire. In their next match against the Tampa Bay Mutiny, they gained their first point thanks to a 0-0 draw. Following that, the Fusion got their first win as well against the New England Revolution. The Fusion tallied another draw in their next match and in their sixth match they lost to the Columbus Crew 5-1. The Fusion started out with five points in their first six matches. Their season ended in the Conference Semifinals thanks to a loss to D.C. United.

After a long absence of new teams, two new teams joined the fray. The first of those was Chivas USA. In the first match, they lose to D.C. United 2-0. In their next match, they got their first point against the San Jose Earthquakes thanks to a 3-3 draw. They took a slide in the next three, losing all of them. The sixth match, however, Chivas was able to pick up a win against Real Salt Lake. They finished their first six matches with four points, the worst total so far for an expansion side. Chivas USA was abysmal in their first season, only tallying 18 points. They finished last in the Western Conference as well, just below the next team.

That team is Real Salt Lake, the other team introduced alongside Chivas USA. Real Salt Lake was the first team since Chicago Fire to get a positive result in their first match, drawing with the MetroStars, now the New York Red Bulls. The next match, however, they would take their first loss against the Los Angeles Galaxy. After that, they got their first win, beating the Colorado Rapids 1-0. Real Salt Lake lost two of their next three, and the other match was a draw against the San Jose Earthquakes. So, after six matches, Real Salt Lake had five points. They ended their season with 20 points, finishing second-to-last in the Western Conference.

The Houston Dynamo began their campaign in the 2006 MLS season. The San Jose Earthquakes moved and became the Dynamo. They are partly an expansion side even though they retained many of the pieces of the Earthquakes. Because of this, their start may seem better than others. They began with a 5-2 win against the Colorado Rapids. Their next two matches, however, were both losses. The Dynamo then went on a run, winning their next four matches. This six-match start was tremendous, giving them 12 points. They ended the season in second place in the Western Conference and also won the MLS Cup against the New England Revolution.

The next team to enter the league was Toronto FC. Toronto began their first season with four straight losses, not scoring a single goal in any of them. Their next two matches were the opposite, though. They won both of them, conceding only one goal in them. Toronto finished their six-match stretch with six points and the season with 25. They ended the season with the worst point total in the Eastern Conference.

The San Jose Earthquakes returned to the league in 2008 with a brand new team. They began the season with two losses. The third match gave the Earthquakes their first win of the season against the Colorado Rapids. Following that match, they lost two of their next three. Their fifth match was the only one where they were able to gain a point, a draw against FC Dallas. The Earthquakes tallied four points in their first six and at the time were tied with Chivas USA for the least points in the first six matches. They finished last place in the Western Conference with 33 total points. 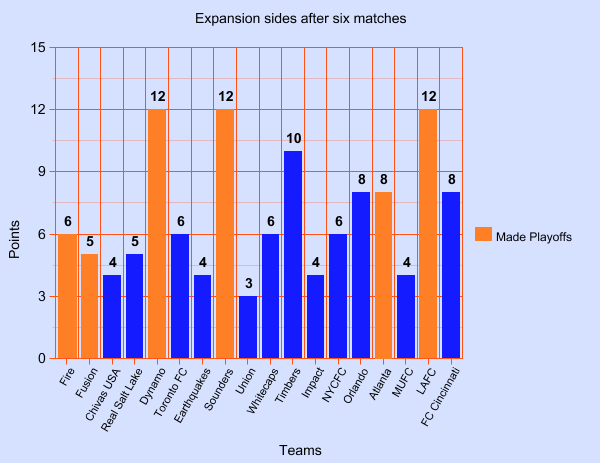 The first brand new franchise to join the league in two seasons, Seattle is one of the most successful expansion sides. They began their season with three consecutive victories and all of them with a clean sheet. After that, they lost two straight before winning their sixth match against the San Jose Earthquakes. They totaled 12 points in their first six, tying them with the Houston Dynamo for the highest total in that stint. They finished the season third in the Western Conference with 47 points and lost in the Quarterfinals. However, they did end up winning the U.S. Open Cup against D.C. United.

The Union were the next team to join MLS and didn’t fare very well. They began their season with a loss to the Seattle Sounders. Their next match gave them their first victory, which was against D.C. United. However, they lost the next four matches. They ended their first six matches with the worst total points of any expansion side with only three. They finished the season seventh on the Eastern Conference table with 31 points, only above D.C. United.

Two teams joined the league in the 2011 MLS season, and the Vancouver Whitecaps were one of those teams. Vancouver began their campaign with a 4-2 victory against Toronto FC. Then, they lost 1-0 to the Philadelphia Union. Three of their next four matches were draws, and the other match was a 3-1 loss to the Houston Dynamo. They ended the six-match stretch with six points. They finished the season last on the league table with only 28 points.

The other team to join in 2011 was the Portland Timbers. The Timbers began the season with two losses. Their third match gave them their first win against Chivas USA. The next match was a 1-1 draw against the New England Revolution. The next two matches for Portland were both wins. Portland finished their six-match stretch with 10 points, the second-most points for an expansion side at the time. Portland ended the season with 42 points, and seventh on the Western Conference table, one place below the playoffs.

Montreal was the next team to join the league, which was in 2012. Montreal began their campaign with a 2-0 loss to the Vancouver Whitecaps. The next match gave them their first point, which was a 1-1 draw to the Chicago Fire. Their next three matches were all losses, however. Finally, in their sixth match, they got their first win, 2-1 against Toronto FC. In their first six matches, they got four points, the second-worst total for an expansion side. At the end of the season, they tallied 42 points, missing the playoff as well.

After a three-year hiatus for expansion sides, two new teams joined the league, New York City FC one of them. NYCFC started the season with a 1-1 draw to Orlando City SC, who I’ll mention soon enough. Their next match was a 2-0 victory against the New England Revolution. After that, they drew 0-0 to the Colorado Rapids. Then, they lost two straight. In their sixth match, NYCFC tied 1-1 to the Philadelphia Union. In their first six, NYCFC got six points, an average total for an expansion side. They finished the season eighth on the Eastern Conference table with 37 points, also missing the playoffs.

As I said, Orlando City SC would be mentioned later, and here they are. They joined the league alongside New York City FC. As mentioned above, their first match was a 1-1 draw against NYCFC. They got a 1-0 win against the Houston Dynamo in their next match, their first victory. Orlando suffered their first defeat against Vancouver Whitecaps next. A 2-2 draw to the Montreal Impact followed the loss. Orlando suffered their second defeat to D.C. United after that, and in their sixth match they won 2-0 against the eventual MLS Cup winners Portland Timbers. They finished their first six matches with eight points, which is good for an expansion side. They ended the season with 44 points and in seventh place, just missing the playoffs.

It would take two years for some new teams, two of them in fact, to join the league, one of them being Atlanta United FC. Atlanta began their first season with a 2-1 loss to the New York Red Bulls. They ended up winning their next two matches. The two matches following that, they got two draws. Their sixth match was a loss to the Montreal Impact. They finished this stretch with eight points and ended the season with 55 points, making the playoffs.

LAFC only joined the league last season, but they are already very successful. Their coach was also mentioned at the beginning of this article as he was the coach of the Chicago Fire when they began, Bob Bradley. LAFC began their season with two wins then took two straight losses, one of those being to the Zlatan-led LA Galaxy. Their fifth and sixth matches, however, were a return to form as they won them both. LAFC finished with 12 points in their six, tied for the most for an expansion side. They ended the season third on the Western Conference table with 57 points.

Finally, we are at FC Cincinnati, our own Orange and Blue. FC Cincinnati started their season with a 4-1 loss to the Seattle Sounders before drawing 1-1 to Atlanta United. They then won two in a row to Portland and New England. Following that, they lost to the Philadelphia Union. In their sixth match, they drew Sporting KC 1-1. They finished the stretch with eight points and the rest of the story is still to be written.

Overall, there have been a multitude of expansion sides with many different stories. The average start in the first six matches for the 18 expansion sides on this list is 6.83. FC Cincinnati is ahead of the curve based on that number. However, starts are not a whole season and FC Cincinnati will write its history based on the results to come. Only three teams since 2009 have made MLS playoffs and only one of them started with eight points. Orlando City also started with eight but dropped too far behind later in the season.