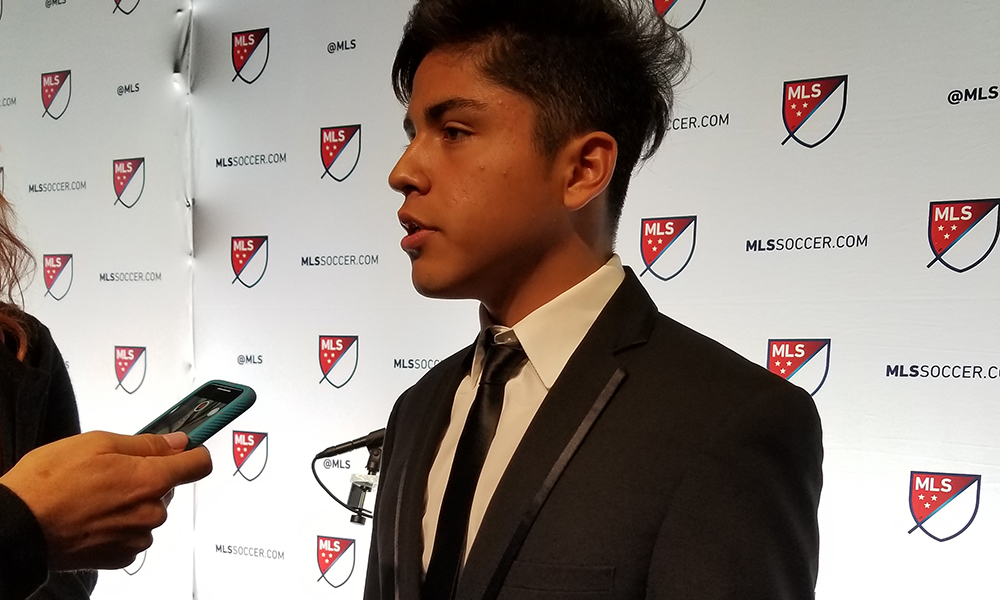 On the training pitch, Frankie Amaya stands out. But these days he is less noticed for his stature and more for his skill.

At barely 5-foot-5 and 144 pounds, most of Amaya’s teammates tower over him. FC Cincinnati has 13 players listed at 6-foot or taller, six are at least 6-3. But Amaya now is ready to emerge from their shadow.

The 18-year old midfielder is no longer a boy amongst men.

“There’s no charity in this business,” Koch said. “He deserves this opportunity. I’m excited to see how the game goes and if we need a player, I won’t hesitate to put him out on the pitch. I always had high expectations for him. He’s still young, but he’s got a lot of talent.”

During the first few weeks of his MLS career, Amaya was a fish out of water. He was surprised by the speed and quality of the players around him. He was surrounded by superior athletes, and his fitness was tested daily. But his teammates rallied around him.

“I came from a slower environment,” Amaya said. “I had been playing in the U20s and college, but this is a new level. The speed and technique on these guys is just crazy, so I had to adapt to it. Everyone on the team, not just one guy, have helped me get better.”

Amaya’s technical ability has improved over time. He has been working on finishing around the goal. That, like most things, will improve with confidence. But his overall game is a far cry from where it was at the beginning of preseason camp.

Amaya is on the United States U-20 men’s national team that earned a trip to the 2019 U-20 World Cup by winning the CONCACAF U-20 Tournament. Amaya made his debut with the U20s on Mar. 21, 2018, and scored. Training with the U20s has been another key element to Amaya’s growth as a player

“I love going to camps,” said the former UCLA standout. “The intensity over there is at a high quality. I express myself in front of other really young guys in the league, so I really love going to those camps.”

Amaya won’t turn 19 until September but he’s already challenged by some of the best young players in the world. Only a month into FCC’s inaugural MLS campaign, and Amaya is just one of the guys.

“I don’t look at players based on their age,” said Koch. “I evaluate how they showcase themselves in training every day.”

On Saturday before another large crowd in Nippert Stadium, Amaya could make his MLS debut, and take another significant step in what promises to be a long, prosperous professional career.

“It means the world to me,” Amaya said. “It’s something that I’ve been looking forward to. I’ve done a lot of repetition stuff with my technique and it’s just gotten better and better every day. My fitness has gotten better. I’ve adapted to the speed of the players in this league.”

Adding Amaya to the squad adds another wrinkle to a compelling selection process for Koch on Saturday. The players who were out on international duty were back at training on Friday, and indications are that they will be fit for the match. There was no confirmation of Fanendo Adi’s status for Saturday.

A victory for FCC would give them 10 points in five matches, making it the best start for any expansion club in its debut season.

After delivering a dominant performance last week at New England with a reduced roster, Koch has more players than ever looking to break into the squad.