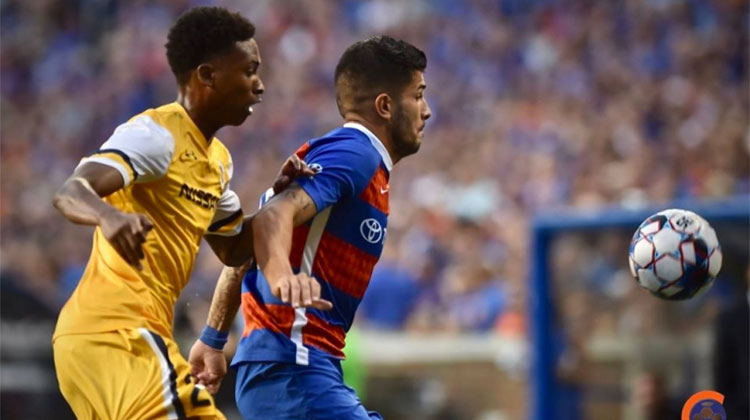 FC Cincinnati set a new USL record with their 23rd consecutive match without a loss after a 3-3 draw against host Nashville SC Saturday night. 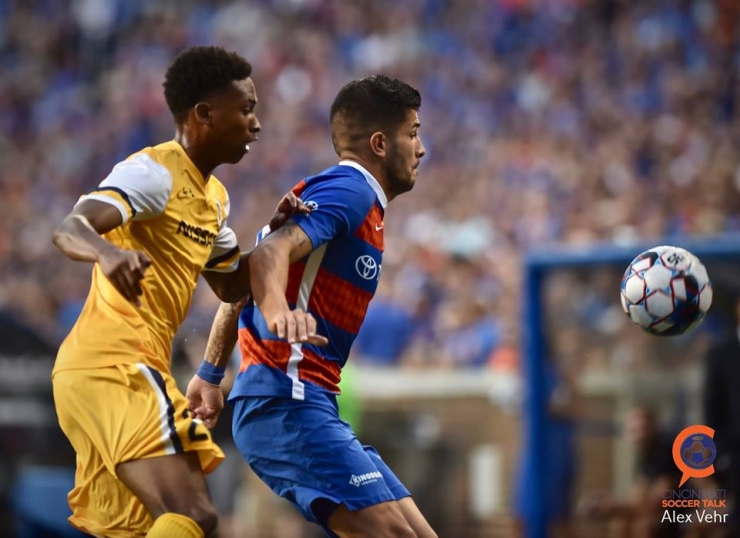 FC Cincinnati set a new USL record with their 23rd consecutive match without a loss after a 3-3 draw against host Nashville SC Saturday night.

The Regular Season finale featured two teams that punched their tickets to the USL playoffs coming into the evening. While FC Cincinnati claimed the top spot in the East a couple weeks ago, Nashville clinched their spot with Ottawa’s loss to the Charleston Battery Saturday afternoon.

Both teams ran out strong Starting XI’s with Fanendo Adi leading FC Cincinnati up top. It was also a notable night as Corben Bone notched his 100th appearance as a member of the club.

While FC Cincinnati was the first team to get on the board early a few months ago in the match at Nippert, tonight Tucker Hume struck in the 5th minute for Nashville. Paddy Barrett was unable to clear a ball at the top of the box allowing Nashville forward Alan Winn to get down the left flank. Winn’s perfectly weighted cross found the head of Hume who outjumped Forrest Lasso and put the ball inside the left post for the goal.

Down early in the match, FC Cincinnati resorted to several unsuccessful long balls to Fanendo Adi up top but the squad seemed to find their footing as the 1st half rolled on. Key to that success was Justin Hoyte. For most of the first half, the right-back had his way up the right flank creating several dangerous chances into the box.

One of those chances came in the 35th minute where Matt Pickens came up big for Nashville. Emmanuel Ledesma hit a curling shot that looked destined to go into the left corner of the goal but it was Pickens who was able to tip the ball just wide denying FC Cincinnati of their opening goal.

FC Cincinnati continued to control the first half with 70% of the possession but they were lucky to not be down 2 just before the half-time whistle. Alan Winn looked to have a half chance inside the box but was grazed by Blake Smith causing Winn to lose his footing. Nashville players screamed for a call but Winn fell easily and the center judge deemed it a not a foul.

The Orange & Blue built upon the momentum in the second half and several key players for the away side proved to be the difference. Corben Bone landed the equalizer in the 52nd minute after several chances. The play started as Tyler Gibson drove up the left sideline and hit a long pass to Ledesma who one-touched it to a streaking Bone. Bone calmly slid the shot past Matt Pickens for his 10th goal of the season. That goal gave FC Cincinnati their 4th player with 10 or more goals in a season becoming the first club in USL history to achieve that feat.

In the 63rd minute, FC Cincinnati pulled ahead on another near olympico by Ledesma. Pickens tried to tip Ledesma’s shot over the bar but the ball landed at the forehead of Nazmi Albadawi on the goalline who calmly headed it into the back of the net.

FC Cincinnati seemed to be in control until a crazy 10 minutes to conclude the match. In the 80th minute, Ropapa Mensah did a great job to keep the ball in play on the right touchline and crossed it into Nashville’s substitute forward Brandon Allen. Allen had a great touch between the two FCC centerbacks and into the goal.

Right from the ensuing kickoff, FC Cincinnati took the ball right down the pitch where Corben Bone caught the Nashville defense sleeping. The midfielder avoided several defenders on the left side of the field and hit a cracker just inside the right post to give FCC the lead.

.@CorbenBone finds the back of the net for his 11th of the season to put #FCCincy back in the lead!

The 3 points were not to be as Nashville escaped with a late point behind a Bolu Akinyode goal. Nashville had several chances in the 90th minute that were blocked by FC Cincinnati’s defense. Unfortunately, the defense was unable to clear the ball and the young Nigerian one-timed the ball into the upper right corner of the goal to earn a point.

Neither team was able to notch a winner in extra time and the match ended 3-3 with goals from Bone (2), Albadawi, Hume, Allen, and Akinyode.

FC Cincinnati’s next match will occur next Saturday, Oct. 20 for the first round of the USL Playoffs. The Orange & Blue will hold the #1 overall seed and would host every match they qualify for.

Coming Together: Even though FC Cincinnati finished a 34 match regular season at the top of the table, the front four of Adi, Ledesma, Bone, and Albadawi is still figuring each other out. The first 20 minutes of the match, the offense was stagnant and resorted to long balls to stretch out the Nashville defense. After being largely ineffective they were able to get some traction up the right side of the pitch with service from Justin Hoyte. The key though was Coach Alan Koch’s halftime adjustment to get Ledesma more central in the lineup. His ability to pull defenders gave Bone the space he needed to record a brace. There are times you can still see they haven’t played much together but if the front 4 can figure themselves out, then they might be collecting more silverware in 4 weeks.

Playoff Scenario’s: With the results at the end of Saturday night, FC Cincinnati can face either Bethlehem Steel FC (47 pts/ 33 played), Nashville SC (49 pts/ 34 played), or New York Red Bulls 2, or North Carolina FC. Bethlehem and New York both have matches Sunday afternoon when wins would see them avoid FC Cincinnati. Here are the scenario’s to determine FC Cincinnati opponent next Saturday:

That’s It: It’s hard to believe that after three short seasons, this was FC Cincinnati’s last USL regular season match. There have been a lot of great memories from the Dirty River Derby’s to the Travelling Bailey and so on and so on. The USL gave FC Cincinnati the chance to show that we were ready for Division 1 soccer in this country and Coach Alan Koch and General Manager Jeff Berding took full advantage of it. We are all going to miss our rivalry with Louisville, close away matches, and the other intricacies of the league and we at Cincinnati Soccer Talk want to take the opportunity to thank all those involved in the building of our club. We are excited to see what lies ahead but it is important to not forget our roots and remember what got us to the point where Major League Soccer decided they wanted to invite us into their fold.