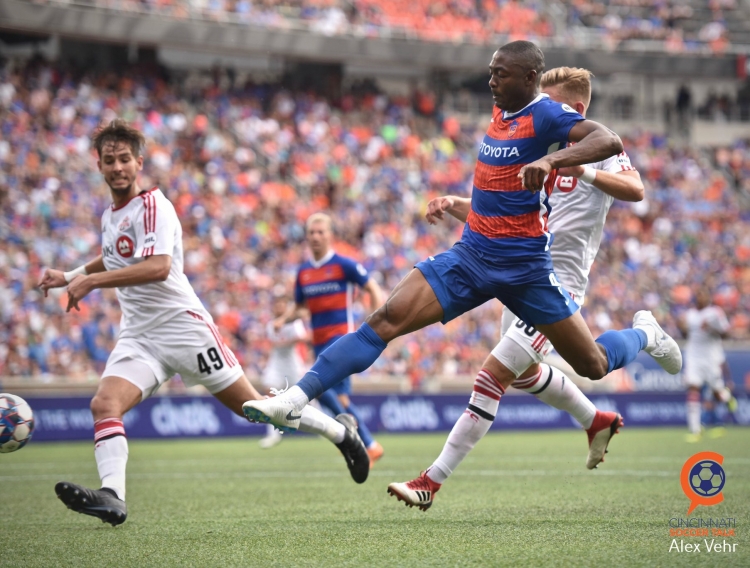 On an 88th minute goal from Corben Bone, FC Cincinnati rallied for a 4-3 victory over Toronto FC II on Sunday. 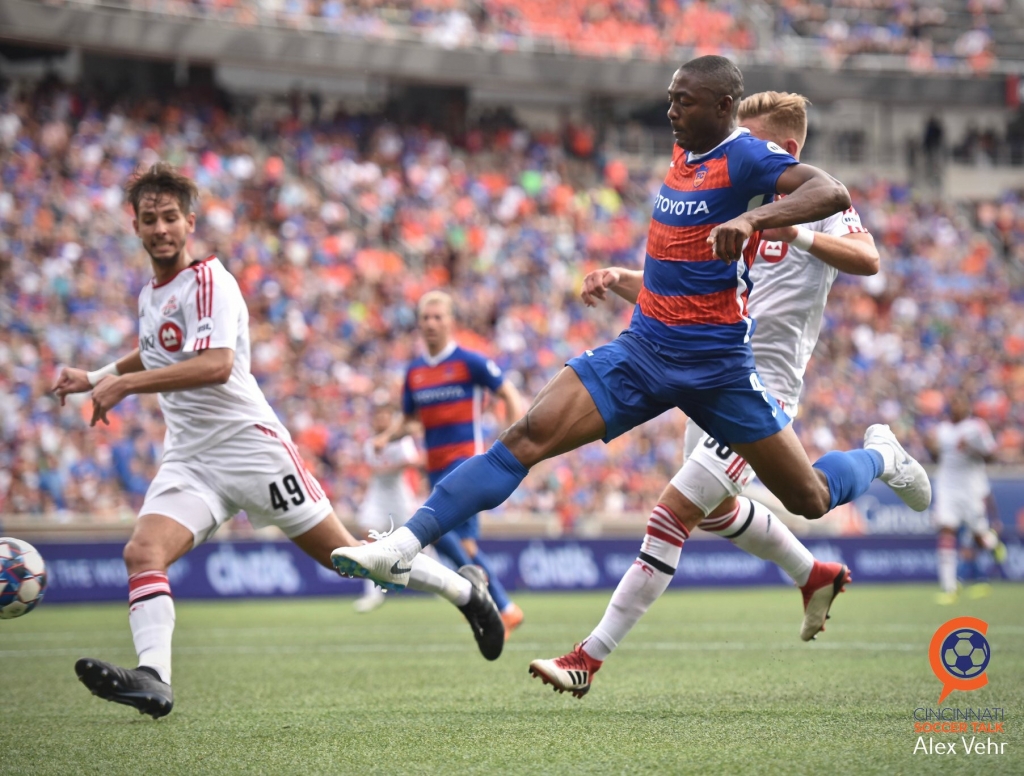 Toronto FC II — a team known recently for taking points from the USL Eastern Conference’s heavyweights — gave FC Cincinnati all it could handle Sunday at Nippert Stadium. But with some late heroics, FCC put some more distance between itself and the rest of the table.

On service from Emmanuel Ledesma, Corben Bone headed one home in the 88th minute, and FCC rallied to escape with a 4-3 victory and three points.

The result clinches at least a second place finish for FCC (20-3-6, 66 points) in the USL Eastern Conference and guarantees a second home playoff game, provided the Orange and Blue win the first. The magic number for FC Cincinnati claiming the Supporters Shield — and thus earning home pitch advantage throughout the playoffs — is now six points.

The Orange and Blue are 16 points clear of second-place Pittsburgh. They’ve now won seven straight and are 18 straight unbeaten. But FCC coach Alan Koch wasn’t in a mood to celebrate anything afterward.

“I might be getting old and grumpy I guess, but I’m not happy,” he said. “I wasn’t happy with our performance. I wasn’t happy with how we managed the game, collectively and individually. I think we made some horrendous decisions in the game. I don’t want to take anything away from Toronto, because I thought they played very well and I thought (Tsubasa) Endoh scored fantastic goals But we gave them opportunities, and you’ve got to manage the little moments.

“We do not need to lose a game to learn. You can learn just as much from a game by winning a game. I’m happy for the guys that we won the game, but I’m going to leave here just as disappointed as I would if we would have lost.”

Last-place Toronto (3-21-4) has been giant-killers recently with wins at Louisville and at home against Nashville. FCC had a road draw against Toronto earlier this season. Endoh sparked Toronto with a hat trick.

“Endoh is a fantastic finisher,” Koch said. “He capitalized on those moments. No disrespect to Toronto, I thought they came in and they played very well. They had a good game plan — they almost executed it — but we gave a quality player way too much space, first off. And we didn’t play the way we needed to play. Thankfully we have enough individual and collective class to go out and get a positive result, and at the end of the day that’s the most important thing.”

Bone’s game-winner was his second goal of the match and Ledesma’s third assist. Ledesma set a new USL single-season assist record and now has 15.

“We have a lot of special players on the team, and a lot of guys score goals and create assists,” Bone said. “(Ledesma) has done that this season. Credit to him — (Sunday) his assists were great. But at the end of the day, I think we all do that for the team. And he would tell you that as well. It’s great for the whole team that he’s done that. It’s a testament to what we have here.”

FCC dictated play in the first half with 62 percent of possession. Toronto got into the match in the 21st minute when Noble Okello Ayo sent one just inches over Spencer Richey’s goal. Then in the 24th, Endoh sent a 26-yard rocket past Richey to give Toronto a surprise lead.

FC Cincinnati responded in the 31st minute on a free kick from Ledesma to Forrest Lasso, who headed it home to level the match at 1-1.

Fanendo Adi, making his first start at Nippert, scored in first-half stoppage time with some fancy footwork to give FCC a 2-1 lead.

The best view you’re gonna get of @fanendo’s goal. 👀

But almost before the smoke could clear in the Bailey, Toronto responded on an Endoh equalizer.

FCC’s play became sloppy in the second half. Play, in general, turned a little physical.

Endoh completed his hat trick in the 73rd minute to give Toronto a 3-2 lead.

Bone’s first goal came in the 78th minute on a nifty exchange with Jimmy McLaughlin, a 62nd minute substitute, to make it 3-3.

“I’ve been around Jimmy a long time now, and I think we understand each other pretty well on the field,” Bone said. “So anytime we start moving the ball pretty quickly, I think we can create chances. On the goal, that’s basically what it was, just passing and moving and reading each other’s minds. He put the ball in a great spot, credit to him — it was an incredible pass and I had the easy part of just tapping it in, really.”

Ledesma’s service in the 88th minute provided the game-winner.

“Any time you take a back-post run, if it’s a good ball and it’s whipped in like it was, then it gives the defense trouble,” Bone said. “You could see the goalie (Caleb Patterson-Sewell) kind of hesitate and had to stay on his line, which opens up some space on a back-post run.”