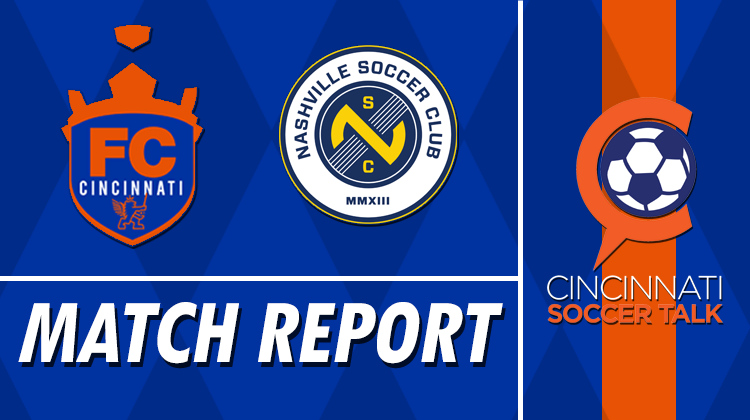 FC Cincinnati fans went into Saturday’s match looking for a statement win over a tough opponent. A dangerous first half which saw FCC on the back foot for 45 minutes and a second half with some promise will leave fans with a glass half-filled feeling after a 0-0.

FC Cincinnati fans went into Saturday’s match looking for a statement win over a tough opponent. A dangerous first half which saw FCC on the back foot for 45 minutes and a second half with some promise will leave fans with a glass half-filled feeling after a 0-0.

During Alan Koch’s post-game comments, he conceded that the club “weathered a storm” over the first 45 minutes in Nissan Stadium. The slick pitch and uneven surface saw Cincinnati players slip, slide and generally look uncomfortable on the ball. Nashville’s high press put pressure on the FCC midfield leading to turnovers and a 60-40 possession advantage.

The FCC defense was called on to save the day early on with center back Dekel Keinan and NSC forward Brendon Allen going hard into several challenges. Keinan was booked early while muscling Allen off a ball. He was judged to have used his elbow which led to his seventh caution of 2018.

Midfielder Lebo Moloto took advantage of the Cincinnati midfield that was without Richie Ryan for the second consecutive match. The South African routinely found space in between the “diamond” midfield that led to more than a handful of chances in the first half. After putting four shots from distance and a header at Newton, the midfielder should have logged Nashville’s first goal. The big man worked himself into space behind Keinan and Kenney Walker on a cross and launched a header at the Cincy goal. In what was probably the play of the game, keeper Evan Newton made a huge save to keep the score level at 0-0.

Cincinnati was not without its chances in the half, but quality opportunities were hard to come by. Emmanuel Ledesma nearly chipped the keeper in the 29th minute, but his touch went left of the mark. Seconds later FCC would get the ball up the left flank that was crossed centrally towards Danni König. The Dane made a terrific dummy on the ball which fed to Ledesma. The Argentine, in what was a theme for his evening, placed the ball high off the mark. Ledesma nearly found the upper 90 in the last moments of the half but couldn’t deliver one of his trademark moments of brilliance.

FC Cincinnati would return to the Nissan Stadium pitch in the second half in a 4-2-3-1 formation, which saw Ledesma pushed right, Corben Bone on the left wing and Walker dropping next to Michael Lahoud. This adjustment from coach Alan Koch saw a completely different FCC squad in the second half. After conceding 13 shots in the first half (three on frame), Nashville was only able to attempt seven, none of which found the target.

The Walker-Lahoud tandem helped minimize the threat of Moloto and allowed FCC to regain a bit of firepower moving the ball forward. Nashville was able to get the ball into the FCC half more often than not, but the added defensive pressure repelled the Music City Boys and helped FCC get offensive chances on the counter.

Walker nearly got FC Cincinnati on the board in the 59th minute off a volley that took every ounce of effort from Matt Pickens to save. The midfielder had another opportunity in the 62nd that grazed NSC midfielder Alan Winn and soared inches above the frame of goal.

Nazmi Albadawi created an opportunity for Bone on a through ball in the 65th minute. Albadawi’s ball found Bone at the top of the box, but the USL veteran keeper caught just enough of the rock to stop Bone’s effort.

While the second half was better for FCC, Nashville did have a couple chances. Captain Michael Reed was able to outjump Michael Lahoud in the 69th minute, but his header sailed over Newton’s frame. Matt Lagrassa nearly had a goal in the 80th minute, but his chance which beat Bone and Walker fell wide left.

The last 10 minutes plus stoppage was all FC Cincinnati. Substitutes Jimmy McLaughlin, Russel Cicerone and Emery Welshman gave the NSC back four fits. Koch elected to keep his back four and cover (Walker and Lahoud) the same over the last 30 minutes and elected to focus his subs on potentially getting three points.

Cicerone beat his defender down the left side in the 85th minute but was once again stopped by Pickens. Welshman was fed a ball from Albadawi in the final minutes of regulation and could have scored the winner. The aging keeper knew when to get off his line at the right moments and stopped the Canadian from taking a touch for goal. Pickens was the second half MVP for Nashville, saving what should have been at least one goal for FCC.

Both clubs would have wanted to come away with three points from Saturday night, but both will leave logging on hard-fought point from Nissan Stadium.

Things may have ended scoreless in Tennessee, but there's still plenty to catch in the highlights from tonight's draw at @NashvilleSC.#JoinTheMarch | #NSHvCIN pic.twitter.com/8cuyK67tNT

Still Found A Way – Most FCC players will probably admit that Saturday was not their best performance, but key players still created some chances. Ledesma will want a couple of his shots back, and Albadawi made two or three sublime passes that put the Nashville defense under pressure. With the tough field conditions and the scarcity of attacking chances in the first half, FCC did well to put pressure on Pickens when the time came to it.

Adjustments Save A Point – Coach Alan Koch was hoping his midfield quarter of Albadawi, Bone, Walker, and Lahoud would play up to the level when Ryan was in the mix. Unfortunately they were disorganized and required tactical ajustments going into the second half. The Lahoud-Walker pairing worked wonders, and FCC was still able to get pressure on the NSC defense with one less body moving forward. The 4-2-3-1 could shape up to be a nice change if required again in the future.

Wanting More – FCC fans were craving the chance to get three points and send Nashville back to their baseball field disappointed. Honestly, it’s FCC that is leaving the Music City wanting more from the future. Drawing on the road is what good teams do, but FCC could be called into action on the road in the playoffs if the can’t keep their momentum up. The group will still need to get better if the clubs will realize their dream of a championship this season.