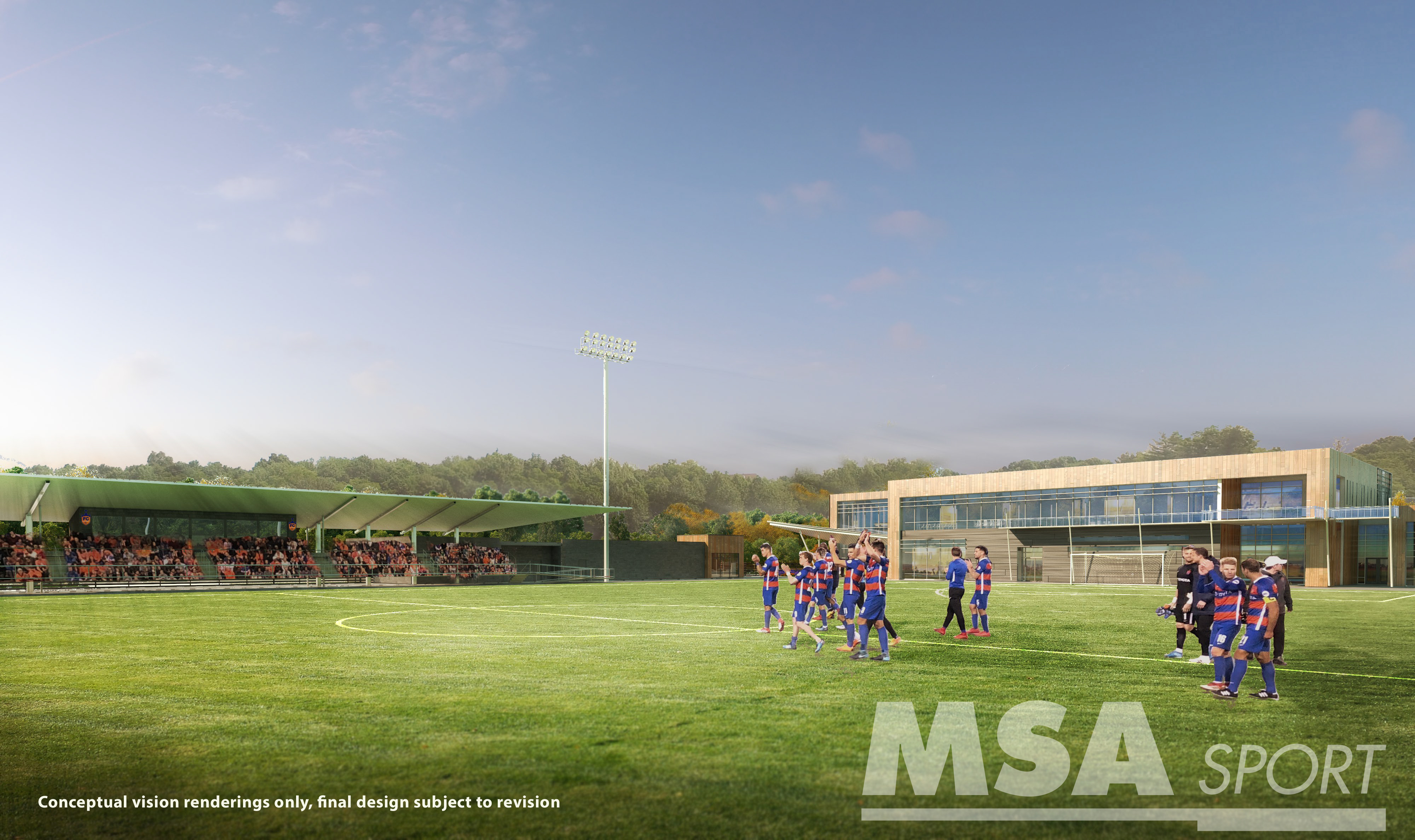 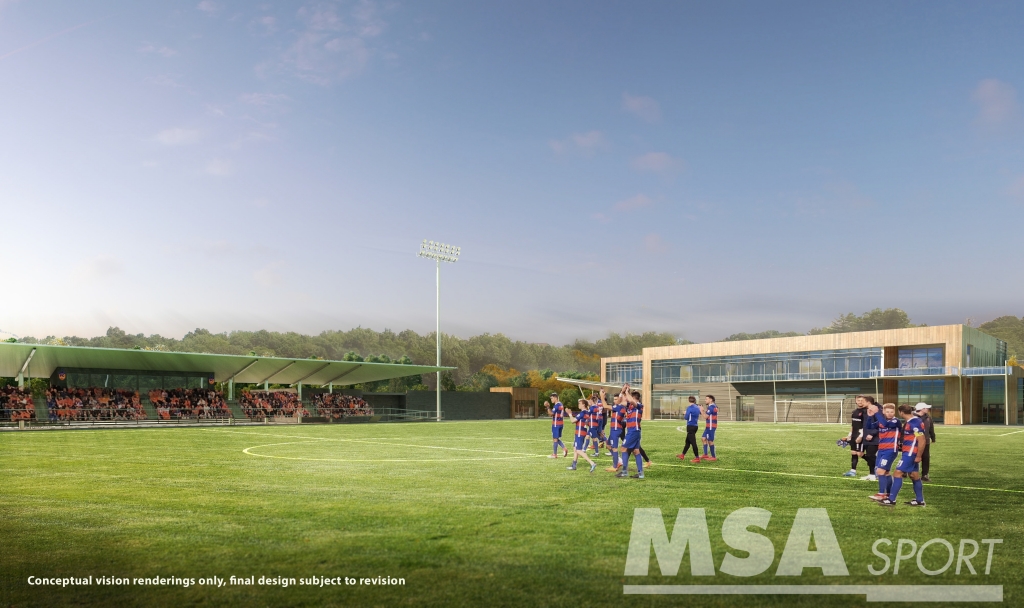 On Tuesday afternoon, FC Cincinnati announced plans to build a world-class team training complex in Milford, Ohio. The 23.6-acre site, located at the former Expressway Park softball complex is expected to be fully operational by July 2019 with all site work completed by the end of 2019.

According to a release by the club, the FCC first team will relocate to the complex in January 2019 and will utilize temporary team facilities until the training complex is completed later in the summer. The $30 million facility designed by MSA Sport will be financed by the club with the land being provided by the City of Milford and Clermont County, who will fund the purchase by increasing the county’s hotel tax by 1%.

The ambitious complex will rival some of the best in the league and will include three full-size, lighted soccer fields (two grass, one artificial turf), as well as a goalkeeper-specific training area. While having fewer fields than some of the newer MLS training facilities (Atlanta – 6, Orlando – 6), the 30,000 sq. ft. first team headquarters, and 6,500 sq. ft. academy building will be some of the largest in the country outside the national training grounds at Pinnacle in Kansas City (81,000 sq. ft. with 12,000 sq. ft. dedicated to Sporting Kansas City) and the 42-acre site for Real Salt Lake that includes a charter high school.

FCC’s facility will dwarf the new 17-acre, 25,000 sq. ft. facility built by NYCFC in 2018 as well as current facilities of Columbus Crew SC, New York Red Bulls, Portland Timbers, New England Revolution among many others. Very few MLS clubs will be able to provide the level of facilities FCC will offer once the training ground and soccer-specific stadium are finished. The one glaring weakness this site has not addressed is an indoor facility. Due to regional weather issues, RSL, Seattle, Minnesota, and Philadelphia have or will offer dedicated indoor facilities for their first team and academy. It is unknown at this time if a “practice bubble” will be utilized for preseason.

This facility will go a long way in realizing FCC investor-operator Carl Lindner III’s desire to bring a championship to Cincinnati. The training complex will act as a recruitment tool for technical director Luke Sassano and head coach Alan Koch to bring in high-quality players and staff for the inaugural 2019 season. FCC has practiced on the turf at UC’s Nippert and Gettler Stadiums, but with the grass fields, the club can remove any hesitations foreign or top-level may have from practicing full-time on a synthetic surface.

Check out this piece on theAthletic.com by Laurel Pfahler highlighting how synthetic turf could hurt player recruitment.

The updated locker rooms, athletic training room, sports performance areas, lounges, and dining facility will show prospective MLS signees on how serious the club is in it’s MLS ambitions. The level of care provided to players should be attractive with FCC aiming to bring in personnel at the TAM or Designated Player levels. “In the planning process, we benchmarked training grounds across the world, including the best in Europe, South America and Asia. The goal of the design is to develop one of the premier and most progressive team facilities in Major League Soccer,” said Bill Baker, MSA Sport Principal and Owner, said. Offices for the coaching staff, technical director, and other support staff will allow the club to recruit and hire some of the most talented individuals to enhance the on-field play.

See the video below for what an average day may look like for high-level European players.

What most impressed me about the complex is the dedicated academy building. This structure will include locker rooms, athletic training rooms, and equipment areas, as well as coaches areas and meeting rooms. Right away, this should lure some of the best youth coaches in the region to help develop the FCC academy for the 2020 DA season. Many MLS clubs allocate a changing room or two for their academies. but only a few (Philadelphia & RSL) allocate a building specifically for its academy program. This building will serve as the building block for sustained player development in the region. It is a great first step and one that hopefully will be expanded upon in the future

“We are building a transformational facility, not only our club, but also soccer in the region,” said FCC president and GM Jeff Berding. “This project will be one of the key aligners of all levels of our soccer operations, from the MLS team down to our youth teams and community programming. This facility is a legacy project as we continue to grow soccer in the Greater Cincinnati area and bring the world’s game to the region.”

I agree with Mr. Berding that this is a legacy project, but it is a project that still will need to keep up with the rapid growth of the league. While the buildings and amount of practice fields are better than most current league training grounds, an indoor facility will most likely be needed at some point. FCC may also have to add smaller fields if the club would choose to add teams at the U-10 and U-12 levels. Several MLS clubs over time have even separated their academy grounds from the first team grounds and this could be a possibility over time.

I am impressed at the scope of this initial project and am excited for what it could hold for FC Cincinnati and potentially the community for the 2026 World Cup. With the United Bid winning the 2026 World Cup and needing training venues for 48 teams, it is highly likely the FCC site will host an international team.

Mr. Lindner is providing his staff with all the tools to succeed on and off the pitch. This facility is a huge commitment for the future success of the club, one which many current MLS investors have not done. This facility is a great first step in the development of an academy and training resources, one that should put FCC on good footing as they enter Major League Soccer in 2019.