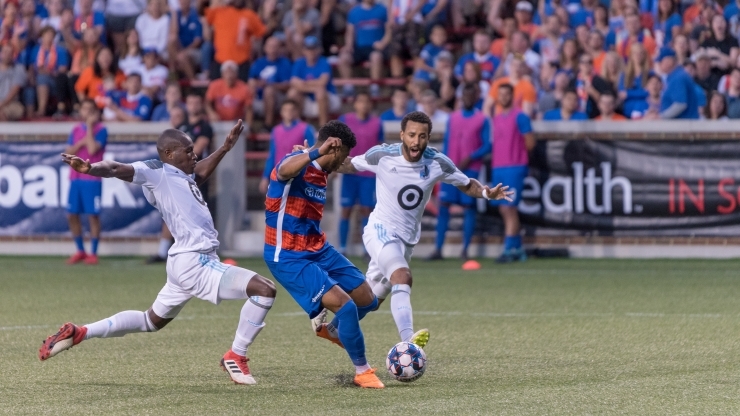 The Lamar Hunt US Open Cup is full of lower division hopes and dreams. FC Cincinnati was the most successful lower division club in 2017, but the 2018 cup run ended when they came up a few penalty kicks short. Minnesota United visited the Orange and Blue after initially winning a home match in the Open Cup draw. That decision was reversed once Minnesota clarified that they could not host the event. Minnesota United and FC Cincinnati have never met on the pitch but will often when FCC joins MLS next season.

Alan Koch, limited by five international spots, ran out a new lineup for the USOC. Notably, Sem De Wit got his second start of the season, and Richey was in goal. A similar, strange lineup was rolled out in the last cup match vs. Pittsburgh. Despite the new faces, the first half started with great defending. Minnesota went on the attack but never fully committed, leaving players back to defend. Koch also seemed focused on holding Minnesota off and working the attack in on the counter. Once the first ten minutes of the half passed, both sides seemed to settle in for a long game of chess.

Minnesota United worked the top of the pitch. Several times in the first half, the ball would travel the width of the field via passes, looking for an opening in the attacking third. The Loons were patient and were content to wait for a Cincinnati mistake. The mistakes came, but rarely with the defensive back line, and a couple of those mistakes were made by Minnesota. Cincy players began testing and pressing the Loons and started to earn a few takeaways. Cicerone received an over-the-top pass as he broke forward and got a shot on goal in the 28th minute. Cheers broke out in the 35 minute as Jimmy McLaughlin hit the side netting after a breakaway off a stolen ball. From an angle, it looked like he had made the goal, and the stadium had to settle back in after the partial celebration. The second half ended almost the same way it began. Both teams were willing to bend but not break on defense, and both attacks were willing to hold back, waiting for a perfect shot.

Halftime was an encouraging moment, FC Cincinnati was nil-nil against an MLS team and was playing on an equal level. In the second half, strategies did not change. Minnesota was playing wide, trying to spread out the Cincinnati defense. Cincinnati continued to close down the attack when it got close. Richey saved the ball when it was put on frame. On the flip side, Shuttleworth stifled the chances no matter the direction they were launched. Cincinnati had a good flurry of activity in the box in the 63rd minute. A cross went from the left side to the right and then into the middle. In the danger zone, the forwards were just a hair off. Welshman was in front of the pass, recovered, passed it back, shot, but blocked by the defender.

Both coaches held off on using substitutions, (minus an early MN one for injury) but Alan broke first, sending in Haber in the 77th minute. Haber started off with some nerves, missing an easy pass and giving up a couple takeaways. Eventually, he also settled in but was unable to work the ball in for a go-ahead lead. The game finished nil-nil and FC Cincinnati was once again on their way to Open Cup extra time. Koch burned the last two substitutions in extra time, bringing on Amboei and Albadawi. Albadawi showed an immediate impact swiping a pass and making a run. Both sides pushed for the extra time win and again no answers. The match was destined to be decided by penalty kicks.

In 2017, penalty kicks were the friend of the Orange and Blue. In 2018, they became the enemy. After Walker hit the crossbar, Minnesota’s Shuttleworth started blocking shots. FC Cincinnati fell 3-1 with Lahoud scoring the lone goal. Spencer Richey had a great night overall and still managed to deflect one penalty kick and keep Cincinnati’s slim chances alive for a brief but hopeful moment.

Build on Tonight’s Success- FC Cincinnati may have lost the match but they found their defense along the way. Cincinnati’s back line held off an MLS team for one-hundred and twenty minutes. In fact, FC Cincinnati has never fallen to a major league side in regulation, 4 for 4. If Cincinnati can carry over tonight’s defensive plan, watch out USL. The problems of the past faded away and FCC refused to allow balls through the middle and closed down the sides after the ball was sent there. Very impressive performance and it shows that FC Cincinnati can hold off teams if they execute the correct plan.

Focus on USL – Fans did not want to lose this match but Cincinnati just rid itself of a distraction. Louisville and Nashville are still in the cup and will now need to deal with two “seasons” just like FCC did last year. Use this time to pull ahead and earn points. FC Cincinnati has a very winnable stretch of games coming and it starts this Saturday vs NCFC. Next, come Bethlehem and Richmond followed by the two Canadian teams that have already been dispatched of once. If Alan Koch can focus the guys and continue to develop play, Cincinnati should stockpile points for later. The price to pay for the easy stretch starts July 7th vs Nashville.

New Faces Perform Well – Sem De Wit has sat on the bench this season with three excellent defenders in front of him. He got his chance to shine last night and he used nearly every moment to do just that. De Wit was a rock on the back line heading balls away, clearing the box from danger and played like a seasoned veteran. Last season, our staff was critical of De Wit after a couple rocky performances. Last night, De Wit proved he can hang with Lasso and Keinan. He deserves another chance and hopefully, he is back on the pitch soon.