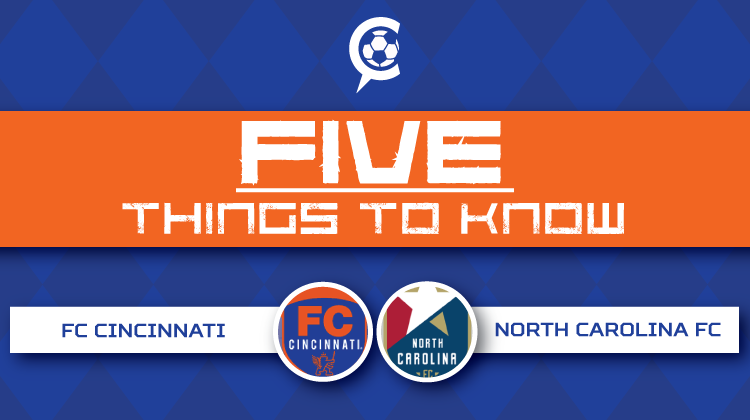 FC Cincinnati seemed a step behind in last week’s USL loss at Charlotte. Then it took a full 120 minutes, but the club got its first U.S. Open Cup win against Detroit City at Gettler earlier this week. The squad should rotate back again to a familiar USL lineup — with the exception of Forrest Lasso, who’s out on yellow cards. The Orange and Blue face a North Carolina FC team improving in form in the friendly confines of Nippert. Check out our 5 things to know below.

Home Sweet Home: Just three of FC Cincinnati’s first nine USL matches were in the friendly confines of Nippert Stadium. The Orange and Blue were road warriors to start the season, and perhaps all the frequent flyer miles caught up to them in last week’s 4-1 loss at Charlotte. The good news for the club and its supporters is four of FCC’s next six are at home. After North Carolina FC on Saturday, Louisville comes to town next week for Round 2 of the Dirty River Derby. Then FCC has two home matches in four days in June — against Bethlehem on June 13 and Richmond on June 16.

Rotate Out, Rotate In: Wednesday’s U.S. Open Cup win against Detroit City FC allowed coach Alan Koch to give a few different players some key minutes. Matt Bahner, Paddy Barrett and Will Seymore started for FCC. So did Nazmi Albadawi and Lance Laing, both now healthy enough to play. Justin Hoyte, Dekel Keinan, Danni Konig, Emmanuel Ledesma, Richie Ryan and Kenney Walker were among those given the night off on Wednesday. Expect to see most of them back in action on Saturday. Corben Bone, Jimmy McLaughlin and Emery Welshman might have tired legs if called to the pitch. Bone has started every USL match this season and came off the bench to play 53 minutes against Detroit. Welshman has played in every match, including all 120 minutes Wednesday — with his hat trick to show for it — and McLaughlin also went the distance in the USOC match.

Yellow Cards: One regular who won’t play Saturday is Forrest Lasso. Lasso is serving a one-match suspension for yellow card accumulation after picking up his fifth last week in Charlotte. Expect Barrett to fill in for him at center back. Keinan and Ledesma each sit at four yellow cards and are one more away from their own suspension. With Lasso already out, I’d expect Keinan to play. But with depth in the midfield, might Koch choose to sit Ledesma this week to guarantee his availability next week against Louisville?

Dirty Sheets: FCC’s defense has allowed opponents to score in six of its last seven matches across all competitions. The 3-0 win in Ottawa on April 28 marks the last FCC clean sheet. This roughly coincides with Koch ditching the 4-2-3-1 used at the start of the season in favor of the 4-4-2 diamond during halftime of the Pittsburgh match. The new formation has led to an offensive explosion with 13 goals in the nine halves since the switch. As more pieces are moved forward, the defense is left exposed a bit, but many of the goals scored against the club have been via sloppy or inattentive defense. Goalkeeper Evan Newton is back from injury and started in the USOC match on Wednesday. Might we see him start again on Saturday, or will Koch continue with Spencer Richey?

About NCFC: A year ago, Nazmi Albadawi was running NCFC’s midfield on his way to a second straight NASL Best XI appearance. Now Albadawi is in orange and blue, and NCFC is in its inaugural USL season. After losing its first three, the club has rebounded with eight points in its last four matches, including a road win at Charlotte and road draws at Toronto and Ottawa. NCFC has been off from USL play since April 28, when it beat Penn FC at home, 3-0. Playing in a 4-4-2, NCFC scored three first-half goals in an eight-minute stretch. Midfielder Kyle Bekker, a former teammate of FCC’s Tyler Gibson with the 2017 Soccer Bowl champion San Francisco Deltas and formerly of MLS sides FC Dallas and Montreal Impact, had a goal and two assists in the flurry.

TV: This contest is set for a 7:30 p.m. EST kickoff on Saturday night. Broadcasting partner Sinclair Broadcasting Group will now air all FC Cincinnati home & away matches. The broadcast duo of Tom Gelehrter and Kevin McCloskey will provide the play-by-play and color analysis to FCC fans live on WSTR Star 64. The match will also be broadcast at FC Cincinnati’s pub partners or by Streaming internet on ESPN+.