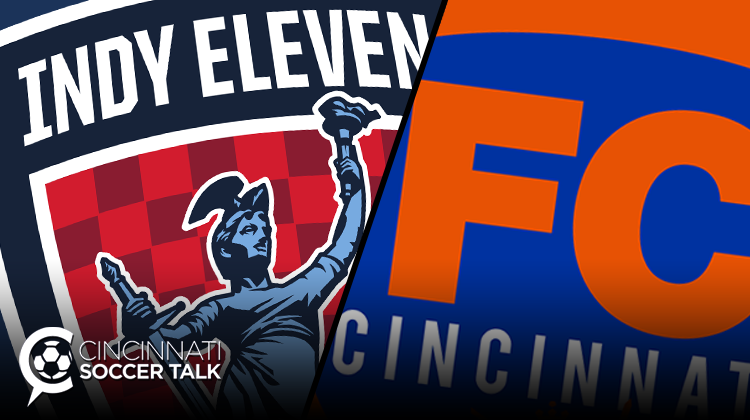 Over 1,000 FC Cincinnati supporters will travel to the Circle City on Saturday to see their favorite club battle USL newcomer Indy Eleven. While these clubs have never played a league match against one another, the clubs have played numerous friendlies and Indy even saw their U-23 group matched up vs. Cincinnati in the 2016 US Open Cup. Due to the short distance between cities, several followers on our social media pages have asked the crew if we feel if this is a rivalry match? We wanted to give our thoughts on what this matchup is and what it could be in the future. Check out our latest CST Roundtable.

Question 1: Plain and simple, is the matchup between FC Cincinnati and the Indy Eleven a rivalry?

Seubs (@nickseuberling): Is this a rivalry? I hate to make teams rivals purely based on proximity. For me to make it a “rivalry” there has to be bad blood between the two teams and there just isn’t any, yet. I’m not saying this can’t be a rivalry, but let’s also consider that we THINK FC Cincinnati is headed for MLS, there won’t be much time to develop bad blood between these two teams.

Ken (@khoetker): Per my sources, this is not a rivalry. Numerous USL teams don’t like us because of our large numbers and therefore want to stick it to us. However, for FCC fans a rivalry needs to have substance behind it, otherwise, it’s just jealousy. If FCC misses MLS, Indy could become a rival but something is going to have to happen to really trigger it. I am excited about the game and who would not be? They are our neighbors and we can travel easily to support our boys. Hopefully, Lucas Oil Stadium provides a great environment.

Trisha (@trishapocalypse): I agree with Seubs by saying there’s more to a rivalry than just distance. I know fans want to refer to close games as rivalries because it adds some hype, but there isn’t enough history for that. We’ve only played them in the preseason and, while it was fun, there wasn’t that much depth/bad blood/anything apart from two clubs trying to win. I think if we miss our MLS bid, that’ll give more of an opportunity for a rivalry to develop. With that being said, I’m very excited for the game because bye weeks are terrible and I’m just ready to see our boys play again. And playing at Lucas Oil is a great opportunity. From the interactions I’ve had with Indy fans on Twitter, they’re looking forward to it as much as we are.

Boston (@BostonKeith): FC Cincinnati has played the NPSL Indy XI before. While it may not be the same team, it does give us a hint at what our fans can expect. These are the fans that set off the world’s largest smoke bomb in a bucket Nippert has ever seen and took the security punishment for it. Indy fans are passionate and have been around the block with their team. I don’t expect a full-blown rivalry like Louisville but you are dreaming if you think one side walks away fine with a loss. When 1,000+ fans invade your city you get defensive. No matter the result, I expect to see excuses and hot takes online from fans. Yes, it is a rivalry, one that is just starting out.

Bryan (@BryanWeigel): No, but I hope it will be. It is at least a derby match (local). I dug through the trash pile of Twitter archives to see how much smack talk came to us FCC fans after our USL announcement. I for some reason thought Indy, Lou City, Detroit, STLFC fans were all telling us how lame we were and how much of a failure we would be. It turns out Indy fans were actually some of the more supportive. This game does mean a helluva lot to me. I never want to lose the first true derby match. Hopefully, this will be a rivalry of respect that could be revived at least in a preseason friendly if we move leagues.

Question 2: Due to the proximity (under two hours), should this derby match have a “name”?

Seubs: I haven’t been able to come up with something clever for this derby name, for me the simpler the better. The Battle of I-74 has a ring to it.

Ken: As far as the name of the derby goes, how about The “Udder Cup” – playing homage to Lindner and UDF, while Indiana takes their Milk seriously at the Indy 500.

Trisha: As for Derby names, I’d say anything with the I-74 would be relatable. I’m not clever or good with titles at all so I’ll defer to someone with a bit more creativity for that one, haha.

Boston: I have thought and thought about a derby name. This one is difficult. Cincinnati and Indianapolis are so close that they even steal each-others local restaurants. Most of us have friends in Indy and visit the city often. The interstate thing is so overused even though it is one of the only things that immediately come to mind. I vote we wait it out. I don’t want to force anything here and it feels like we are forcing a name for our 2nd game. We play Indy three times this season and I would love for something to naturally develop from supporters on both sides.

Bryan: I have been dying to have a Railroad or Locomotive theme for FC Cincinnati since the beginning. Cincinnati has always been known for our railroads and ironically Indianapolis was once nicknamed “the Railroad City”. I don’t know if we can play for a railroad tie or an iron railroad spike, but I think that could be kind of cool. Just a bit of history, the Cincinnati, Indianapolis and Western Railway (and its predecessors) ran lines between the two cities since the mid-1800’s. I-74 started construction in the early-1960s. How about the Railyard Rivalry?