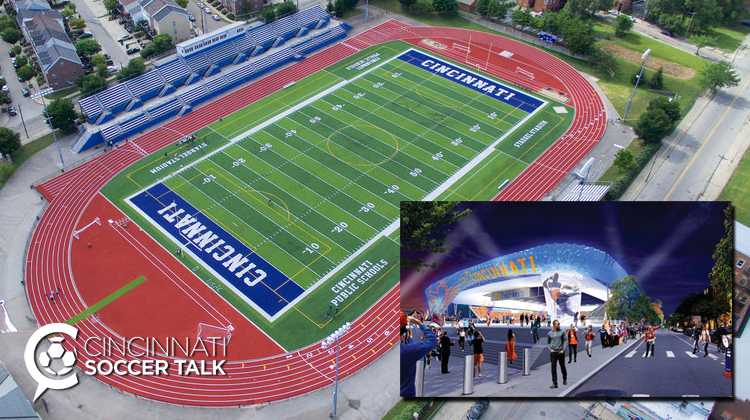 In a report by the Cincinnati Business Courier and through corroborations by sources close to Cincinnati Soccer Talk, we have learned that FC Cincinnati would like to open discussions with the Cincinnati Public Schools Board of Education regarding a possible West End stadium site. It has been rumored since the start of the MLS expansion process that the club had its eye on Stargel Stadium which sits on the campus of Robert A. Taft Information Technology High School. It is assumed that if the club would move forward with a purchase of the property, it would have to be approved by the Board of Education.

This news coincides with statements from Club President & General Manager Jeff Berding that all 3 sites (West End, Oakley & Newport) are still a possibility. In addition, there have been comments from Mayor John Cranley as well as from Cincinnati City Council Members that the West End site has been a possibility all along in FCC’s plans for their final site.

While the prospect of a stadium in the bustling Over-the-Rhine district is exciting and was the first choice of many FCC supporters, the possibility of an Oakley site still remains alive. At the UC Real Estate Roundtable on Friday, Mayor Cranley was quoted as saying “Oakley or West End would make great locations. The obstacles to other locations are substantial.”

A finalized stadium plan at either site, especially the West End location, would seem to be the final checkmark the club would need to clinch a coveted spot in Major League Soccer. While Oakley is near completion with the club awaiting a traffic study, the Stargel Stadium location would be attractive to MLS with its spot in the “urban core” of town. The OTR site may also be preferential to the City and County with its proximity to existing infrastructure, businesses, hotels and parking facilities.

The club has partnered with local governments to come up with $52 million for public infrastructure but that only accounts for a 1,000 parking spot parking structure as planned at the Oakley site. It is realistic to think that OTR would have more dedicated parking spaces than Oakley and that site improvements and area access could come at less of a cost to the government.

The West End site does not come without its challenges. The club would have to come up with agreements with local property owners for the surrounding land. The bigger issue may be with Cincinnati Public Schools. Stargel Stadium serves as the football & track facilities for Taft. Repurposing that site without an equitable alternative would raise red flags in that community and pose a challenge to the sale. After fighting a public battle at the end of 2017 for the Oakley site, the public may not have the stomach for another potential battle with community leaders in the West End. It remains to be seen what offer the club is willing to make with CPS for the site.

Here is the letter sent by Jeff Berding to Cincinnati Public Schools Board President Carolyn Jones.

Just spoke to @fccincinnati GM @JeffBerding he sent letter to CPS tonight asking to meet ab potential stadium in West End. tells me, ‘Oakley is an option, Newport is an option, the West End could be an option.” Letter is included here. The latest at 11 on @WCPO #FCCincy pic.twitter.com/sDOIPwwOxP