FC Cincinnati was unable to clinch their spot in the playoffs last Sunday but punched their ticket Thursday night when Tampa Bay knocked off Orlando City B. Now it remains to see who the Orange & Blue will play and which seed they can lock up. Three points can help the club avoid #1 seeded Louisville City while a loss assures a 5th match vs the Dirty River Derby rival. A lot is on the line so here’s how some of the staff here at CST feel things will transpire on Saturday.

Here we are. The final game of the season. It’s been tough overall, but as the team looks towards the playoffs maybe we can see a loose relaxed team string together some passes. Knowing they have the playoffs in the bag, I’m expecting a team that is looking to get a final few touches in and not pushing hard. I’m looking at a 0-0 draw as neither team really has much to play for in this game. Hopefully, we can play a clean game with no red cards or injuries and FCC can look forward to a first-ever post-season victory the whole city is begging for.

FC Cincinnati no longer has to worry about securing a playoff spot against Toronto. Though there’s still seeding left to play for, the sense of urgency should be minimal. Despite sitting in last place, Toronto are capable of scoring goals. I can see FCC beginning the match relaxed and conceding early, as has been custom the last six to eight weeks. The return of Kenney Walker and perhaps a late sub should be enough for the Orange and Blue to organize for an equalizer and salvage a point. I predict a 1-1 draw.

Goal Accomplished. The boys are in the playoffs. Now a lot of us may not have liked how the club has looked of late but they are in and that is what matters. A lot may seem to be off the line but I think the opposite is the case. We have seen a lot of movement in the starting XI the last few matches and I think Koch is looking for guys with the right attitude for the playoffs. If players throw up a stinker today they might just find themselves on the bench when it matters. Pat Brennan & Charlie Hatch from the Enquirer both reported that practice was more chippy than they’d seen in the past. It sounds to me like Koch is really trying to press the team’s buttons to see who will rise. I’m going for a 3-1 win in one of the better performances we’ll see this season.

FCC is in the playoffs, the pressure is off. But how does the team respond up in Toronto, away from home and in front 500-700 fans? Does Koch rest some guys and play for the 8th seed and a trip down the Ohio River or does he go all out for the possibility of a 6th seed? This team has struggled all year, especially the last 2 months with their backs against the wall they have not responded well. Now with the playoff spot secured, I don’t know if the team will be fired up for the game. I expect another lackadaisical start and an offensive struggle against a Toronto team full of players that want to get a look at the first team minutes. I am predicting a 2-1 loss and we back into the playoffs.

The pressure is off. Twonto is out and in last place and can’t play spoiler. Cincinnati is in the playoffs. The only thing this game will determine is if FCC climb out of 8th place and that’s not even fully up to the Orange and Blue. With the team relaxed, they travel north and take care of business before the playoff run. Twonto has been shut out 13 times this season and only scored a single goal in 14 matches. Not exactly a scoring powerhouse. FCC will end the season with another Widmer’s Clean Sheet. 2-0 for the Knifey Soccer Lion Kings. 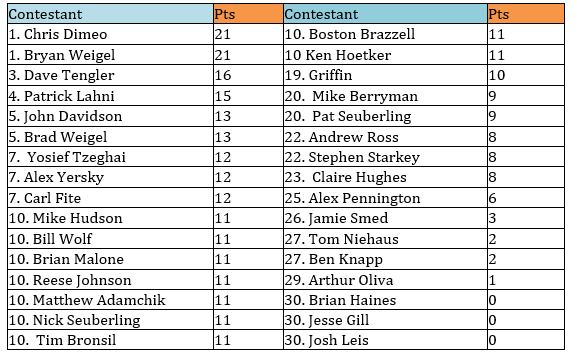 Tune into the latest Cincinnati Soccer Talk podcasts on Tuesday nights at 8 p.m. and look for our new podcast on your favorite podcast network each week!