FC Cincinnati controls their destiny with 2 matches left in the 2017 regular season. Three points in Ottawa would assure FC Cincinnati their 2nd consecutive USL playoff berth. While Ottawa is eliminated from playoff contention, it is unlikely they will just lay over against Cincinnati. There is a lot on the line including playoff seeding, so here’s how some of the staff here at CST feel things will transpire on Sunday.

With this upcoming match, the playoffs seem well in reach. A much needed 3 points in Canada, and a much expected 3 points at that. I think this is a great match to follow a tough win last week and the boys will pull off a 2-1 victory and keep a high seeded position in the playoffs alive.

FC Cincinnati did not play well last week in Charlotte but still got the win. Usually, dependable Kenney Walker had an atypical match and also picked up two yellow cards, meaning he’ll be suspended for Sunday’s match in Ottawa. But the Orange and Blue are still finding ways to collect points away from Nippert Stadium, even if they don’t get all three. We can no longer say FCC is struggling on the road — the club has drawn twice and won once since the blowout loss in New York. And Ottawa hasn’t won period since Aug. 12. Walker will surely be missed, but coach Koch has had his team ready to play every match in the last six weeks. Sunday will be no different, but I don’t think FCC will clinch a playoff spot just yet. I predict a 1-1 draw.

3 points guys, 3 points. That is what stands between us and the playoffs. Even though the Orange & Blue have put together 6 results in a row, it is hard to say that we’ve been the better side in these matches. We’ve scraped, clawed, and fought to the finish line. Without the guts of players like Jimmy and Mitch we probably wouldn’t be here. For better or worse, I think that this is who we are, a team that isn’t going to play a pretty brand of soccer, but one who fights to the end and that is ok. In a playoff format like the Open Cup, that is what made us dangerous. I think Koch knows this and he’s going to count on the guys to dig into that inner fortitude and get another result. I don’t like the style we are playing but it works right now and we need it to work again Sunday. In a testy affair, I’m going with a 2-1 win after a late goal by Birthday Boy Austin Berry that clinches a playoff spot. Happy Birthday Capt’n

The boys in Orange and Blue beginning their Canadian finale tour on Sunday. They will look to end the season with some good form and momentum going into the playoffs. The Fury will be playing for pride as their postseason door is closing quickly. I think Koch will start Djiby with König coming off the bench to run at tired legs in the second half. With Delbridge and Berry holding down the back line, they will see plenty of action without our man Kenney holding down the CDM. FC Cincinnati leaves Ottawa with three points, 3-2 FCC.

With two matches to go, FCC has a chance to truly lock up their spot in the USL playoffs. Ottawa was once a contender for postseason action but that hope has evaporated with their recent form. Ottawa is winless in their last 10 matches and has been left with very little to play for. FC Cincinnati will be without their main man in the middle Kenney Walker, but I still foresee them coming away with a 2-1 victory and a healthy portion of poutine from Ottawa. 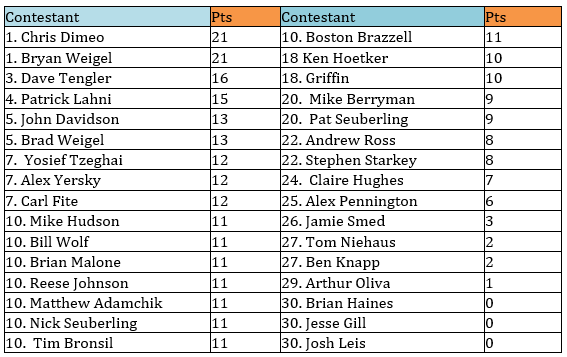 Tune into the latest Cincinnati Soccer Talk podcasts on Tuesday nights at 89 p.m. and look for our new podcast on your favorite podcast network each week!