With a huge 4-2 win over New York Red Bulls II in their home finale, FC Cincinnati turns their attention to Saint Louis FC for the third and final time this season. The Orange & Blue put in two of their more impressive performances of the season against the Preki led club with 4-0 & 2-0 wins at Nippert. There were many fine individual displays but most notable was Dijby’s 4 goals in the first matchup of the season. STLFC got a big win this past week with a 2-0 win over Orlando City B and sit in 11th place, 2 points out of 8th place while FC Cincinnati sits in 6th, 4 points above safety. With 4 matches left, there is a lot on the line so here’s how some of the staff here at CST feel things will transpire.

In a battle of two teams which rarely hold a possession advantage, who will break through and grab three points for their playoff chase? FC Cincinnati has handled Saint Louis twice this season but looked far from the better side in their last match. Djiby or Danni Konig will have to put pressure on the STLFC defense and free up space for the wingers and midfield of the Orange & Blue. If Corben Bone or Kenney Walker are able to sit in the space around the top of the box and link passes to Djiby or the wings, Saint Louis will be on the back foot a large portion of the match. If Saint Louis can counter with some success, that could put a scare into Koch’s side. As much as I want to pick a draw in this match, I feel that if FCC can replicate even just half of their performance from last Saturday, FCC should win. I am predicting a 2-1 win for the Orange & Blue.

Headed to the gateway of the West, it’s also the gateway to a home playoff match. Leaving St Louis without three points would be a bad sign for our form and also ensure no playoff games at Nippert. I think the boys come through and defeat Saint Louis FC 1-0

Since the letdown week surrounding our last Open Cup game, FC Cincinnati has been undefeated in its 4 games. They sit in 6th place and a playoff spot is 100% in their hands to win or lose. The team is focused now and it seems like several things have clicked in our attack with lots of players finding the net in our last game, creating challenges for defenses to determine who to mark. I expect the team to carry that confidence on the road knowing they have to get results. The big challenge seems to be defense right now. The defense has struggled without a clean sheet since July. Ironically, the defense is what generated the magical Open Cup run so we know we have the capability to lock down teams. Saint Louis has been struggling this year, they won their last game against Orlando but were winless in their previous 4. They have lost to FCC in both our previous two matchups this year and are yet to score a goal against us. I think they will manage to finally get a goal against us in this game as we are still working to get our defense back to its stingy ways but the Orange and Blue will net a couple to earn a 2-1 victory.

Can FC Cincinnati get it together on the road? This is the start of the end. Saint Louis FC is a team that never put their season together and one that will most likely miss the playoffs. If Cincy can’t put this game away, I don’t see a way they win the rest. Our boys need to stay mentally tough and drive us into the playoffs. FC Cincinnati wins it 3-1 but Saint Louis scores first.

FCC appears like they got on track after the 4 goal performance last week. But when you look at the numbers they only got 4 shots on goal. The boys were accurate but they were not consistently dangerous enough. Saint Louis starts fast and has been effective early on as of late. I think FCC has another slow start and it puts them in the hole early and we struggle to recover. FCC loses 2-1. 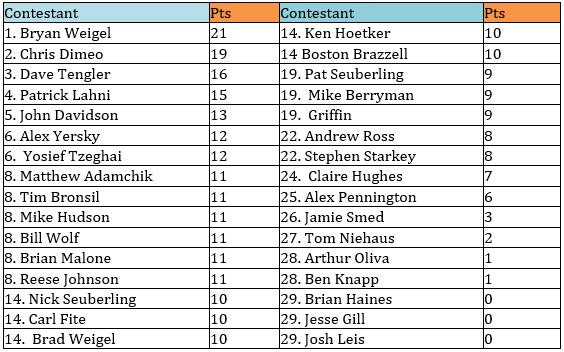