Tuesday night, Jimmy McLaughlin’s clutch stoppage time goal helped FC Cincinnati get a much-needed point on the road against Harrisburg. Saturday the Orange & Blue face a New York Red Bulls II squad that hasn’t lost in 6 matches. During that span, they’ve had impressive wins over Tampa Bay, Rochester, and a 4-0 demolition of FCC. With 5 matches to go, FC Cincinnati sits precariously on the playoff bubble in 7th place 2 points ahead of 9th place Bethlehem. There is a lot on the line so here’s how some of the staff here at CST feel things will transpire.

I’ve had this game circled for the last several weeks as a make or break game for FC Cincinnati. NYRB2 are playing some of the best soccer in the Eastern Conference right now and the match will be a crucial measuring stick for FCC if they are to fight to make an end of season run. The club needs a result to build upon and I don’t think there’s a better place to start than the final match home at Nippert. Points are crucial right now so I think Koch needs to play it smart and not expose our back line to the free flowing soccer the Red Bulls 2 prefer. Quit screwing around and throw Djiby up top and park the bus behind him like we did against the Crew. Hopefully, he can net one and the guys can hold on. It’s time to take a pragmatic approach to every match, style be damned. Coach Koch said each match is a Cup Final here on out so start acting like it. Get a point and focus on nabbing 3 against a struggling Saint Louis FC squad next week. 1-1 Draw.

Record crowd. Playoffs on the line. Possibly the last time this group plays in front of Cincinnati. There’s a lot of pressure mounting for this match against the baby bulls. And let’s remember the embarrassing 4-0 result in Jersey. It’s time for payback, it’s time for this club to show its supporters what they can do outside of the USOC. I predict a 2-0 win against NYRBII.

Last time away, in a quiet little stadium in New York, our boys took a tumble coming off the Open Cup high. That was the last time the Orange and Blue lost a game. Though they haven’t quite found their stride yet as we close out the season, we haven’t lost in the last 3 games and the energy levels are looking good. Last game we played to nil-nil at half instead of coming out a little slow and chasing the game. Now, at the last home game, in front of 30k fans, it’s time to lock one in and begin a nice little run. Time for some revenge. 3-0 for FCC.

It can’t be as ugly as the last time around, right? This game will have a lot to say about FCC’s control of their own playoff destiny. NYRB2 have been in great form as of late and the boys in blurange will at least need a draw to keep pace with others fighting for the remaining spots in the east. FC Cincinnati gets a 2-2 draw in front of a record crowd at home.

FCC has taken on the mentality of a large portion of its fans (USOC Run, MLS, Attendance) and has forgotten what the purpose of playing in a league is for? HARDWARE!!! The team has become anemic on offense, rarely creating dangerous chances of any kind outside of a pure counter (JIMMY). The defense is leaking like a sieve, Mitch has saved 83 shots this season, placing him at the top of that table. I have heard numerous reasons, fixture congestion, but new players, give it time, but I don’t see the growth/improvement on this team. The New York Red Bulls are one of the top 3 performing teams right now in the East and will be a handful. I am predicting a 2-1 loss in front of 30,000. Many people will say I jumped, but I merely got on a life raft while the others remain on the Titanic saying this ship (season) can’t be sunk. 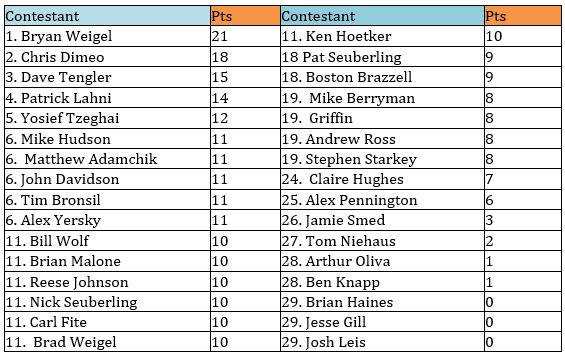