After last Saturday’s last second draw against OCB, FC Cincinnati travels to face heated rival Louisville City FC in the 3rd round of the Dirty River Derby. Their first meeting of the regular season ended in a 1-1 draw at Nippert but FCC was able to take the series lead with a 3-2 victory in Louisville. Take out the 1-0 win in the US Open Cup and we have 4-3 lead in goal differential. The Orange & Blue can wrap up the River Cities Cup with a win, draw, or loss by no more than one. Djiby fall is back after a one match suspension but it will be interesting to see what kind of lineup Alan Koch trots out with the U.S. Open Cup Semifinal looming on Tuesday vs. New York Red Bulls (MLS). There is a lot at stake Saturday night and here’s how some of the staff here at CST feel things will transpire.

In a match where only the most knowledgeable soccer fans will be in attendance, FC Cincinnati will have to deal with the largest crowd in North American soccer and a fan base that has been around since the beginning of time. The opponent has a roster filled with the best player in each position in the league. Let’s face it, the only way we can even come close to scoring is if they make a mistake. This truly superb club is gracious enough to let us play in their magnificent facility that offers only the finest FIFA regulation pitch on earth & perfect sightlines from the away supporters section. We are truly lucky that our opponent and their fans afford us the opportunity to play them 3 times a year. The only way we win is if they have pity on our poor souls. With that being said, LCFC will also rest the majority of their squad to make us feel better about ourselves and allow us to have a 2-2 draw.

This game against LCFC will be a difficult one to predict with the USOC Semifinal match following less than 72 hours after. There is no doubt that Djiby will play, but both the midfield and back line will be a crap shoot. I am predicting that FCC will make a concerted effort to win the USOC game and are willing to take some risks when playing L’Ville. I think we have a good shot at seeing a back-line that looks like Halfhill, Nicholson, and Berry giving 2 of the 3 CBs a rest (De Wit, Harry). Even with a weaker than normal back-line, I don’t see our manager playing defensive/counter tactics in this game. I think Koch will go offensive and play Kyle Greig alongside Djiby. That will immediately put pressure on the LCFC backline. Then Koch starts a midfield with Josu, Bone, Dominguez, Weido, and Bahner we would totally flip the tactics we have been playing and be offensive. If this aggressive formation can maintain possession 50% of the time we will neutralize the LCFC attack. Djiby will get all the attention but Greig will put FCC up in the first half. LCFC’s Ownby will cause problems and Ballard’s speed burns us to get a goal. That is how the game ends 1-1.

Alright, what do we do here? It’s our hated rival but we have IMO a much more important match coming up against the Red Bulls Tuesday in the Open Cup. Should we play our Starting XI or mix in a couple subs and save our legs? Let’s look at our upcoming schedule after this match. FCC plays 8 of their final 9 against teams below them in the standings and it’s of more importance to keep those teams below us. A home playoff game is probably out of reach so qualifying for the playoffs needs to hold sway. I say it’s better for Koch to rest a couple guys for Tuesday and then push hard with our best squad going forward against lower competition. Guys like Dominguez and Nico have proven to be capable on the defensive side of the ball. Give them a run out over guys like K. Walker and Hoyte. Rest Jimmy and Weida for Stevenson, Dacres, or Greig. Be strategic and give these guys a chance to see if they can pull one off. Djiby will be on the pitch and he only needs one shot. LCFC, on the other hand, has a lot to play for. Imagine if you lost to your bitter rival for a 3rd time this season. They may not let us ever return to Slugger! I hate picking against our guys but I think we have to throw this one away and focus of where the better percentages of picking up a win lie. Run out a 5-3-2, pack it in and see if we can get a point but ultimately I think this game ends in a 2-1 loss for FCC.

Here we go again. Remember when Dad made you take out the trash before you could go play with the neighbors down the street? Well, Saturday we have to take care of a steaming pile of purple garbage before we can think about going to play at a sold out Nippert. Let’s not take this weekend lightly. There are still 30 pts up for grabs on the table for the season and we could certainly use them all. I am certain Ol’ Coach Jimmy will have the boys fired up coming out of the dug out. Let’s just hope Koch and club can focus on the task at hand. Djiby and Greig will not be able to play Tuesday, I fully expect them to log some minutes, steal some bases, and break Comic Con hearts. The defense holds their own, and Mitch gets another no hitter… I mean clean sheet. Orange Blue leave Lullllville victorious; 2-0 F C C 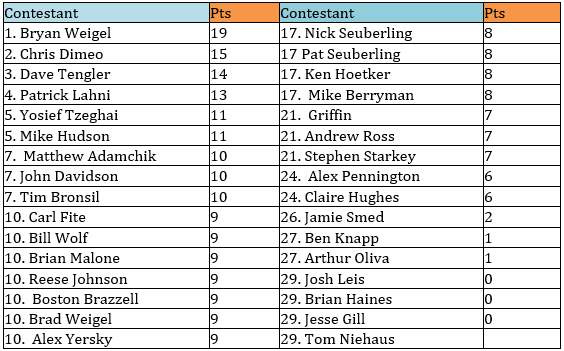