After last Saturday’s disappointing loss, FC Cincinnati rebounded with a huge 1-0 win over The Miami FC to advance to the semifinals in the Lamar Hunt U.S. Open Cup. This week a familiar face comes to town as FC Cincy faces Orlando City B for the 3rd time this season. On May 13th, the Baby Lions came to Nippert and stunned the home crowd earning a 2-0 win over the Orange & Blue.  FCC then headed down to Orlando in the middle of 5 games in a 16-day stretch that saw the good guys fall behind early before clawing back to earn a 1-1 draw. This week FC Cincinnati will be without their leading scorer Djiby after his red card against Rochester. There is a lot at stake Saturday night and here’s how some of the staff here at CST feel things will transpire.

Can Jimmy McLaughlin keep his scoring streak up in the absence of Djiby? Can Kyle Greig get in on the scoring action up top? Who does Koch put in at Center Back on the short week? There are A TON of questions going into a tough opponent. Yes, I called the 11th place team a tough opponent. These guys are hard to beat! Unbeaten in their last 6 matches mind you. Now, 5 draws and 1 win is hardly earth shattering, but they are by far and away a better squad than their place on the table. I love my buddy Yosief so much that I’ll give him the opportunity to try and catch me in the standing. With that being said, I think we will struggle a bit to create early on. The young horses of Orlando should put in a good shift, but FC Cincinnati should at least have some advantage playing in front of over 20,000 faithful fans. I am predicting a 1-0 win for FC Cincinnati. With some luck Yosief can make up a point in our Growler Cup standings, but if stats prove true, I’ll actually increase my lead. #ShadeThrown #GingerChamp

The third time is the charm vs Orlando City B this weekend as FC Cincinnati will take a shot at getting their first win against OCB this season. Cincinnati had their hopes renewed for success renewed after their midweek win after beating Miami FC in the Open Cup this week. They will have some key players fully rested for the match including Jimmy McLaughlin who has found the back of the net in past two matches. FCC will need to get these points at home to keep pace in the East for playoff positioning and I believe they will do just that. I predict a 2-0 victory for the Soccer Ball Kicking Good Guys.

I’m glad the boys in blue were able to get that bad taste out of their mouth with the win over Miami on Tuesday. Before I get into my GC prediction, I was to talk about the flexibility and play of Justin Hoyte. Where would we be if we didn’t sign him?! He’s turned in tremendous performances across the entire back line and has been my MVP as of late. Now, will he get to play Saturday? I don’t know but it will be critical to put in another good defensive shift against Orlando. We seem to get everybody’s best shot at home and it has proved difficult against MLS2 teams such as OCB in the past. Hopefully, we’ll get Josu back and Kyle Greig get’s his first start up top. Add in fresh players like Jimmy & Wieda and this looks like a 2-1 victory heading into the 3rd and final round of the Dirty River Derby!

Well this is a tough one….. typically we struggle after a “big event” like Miami. Coming down to earth is enough to bring the team off its game a bit. However, this time we traveled so even though the game was big, the environment was mid sized. Also, I feel like our roster has started to fill out nicely with depth so there are quality starters hungry to be on the pitch. Jimmy never played in Miami, Wieda only played a couple dozen minutes. Bahner is the same and perhaps Pokak is recovered and ready to play? Down the core, we’ve got Greig and we pulled Konig out early so we didn’t burn him out completely. Nico is ready to step back in as our anchor in center. I’d even be thrilled to see Marco get the nod for this game. Point is most of these players are starters for us and they didn’t play Miami or played minimal time. So, though one side of me worries about getting the energy levels up for a USL game and about playing games back to back, I see that Coach Koch has built a roster exactly for this. I also think with the Nippert home field advantage, it’s going to be tough to beat us unless PRO referee decides they want to win another game. I’m going to go 2-0 for the orange and blue on this one.

FCC is firing on all cylinders, returning home after a historic win in Miami and ready to send the baby lions packing without any points to add to the table. Koch has done an outstanding job of keeping the rotation fresh even with suspensions and injuries. I think we’ll see a Greig and Konig tandem up top giving OCB defenders fits. I predict a 3-1 Cincinnati victory. 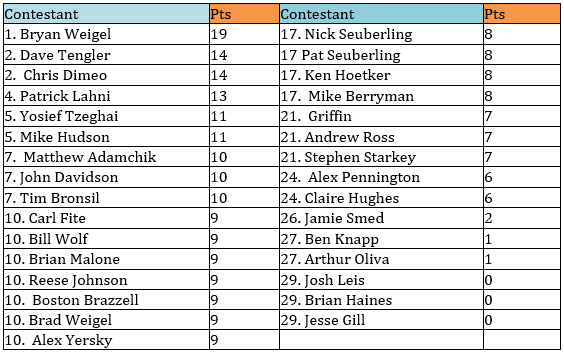