FC Cincinnati got a little bit of a reprieve midweek when their Open Cup match in Miami was postponed due to weather. That means the Orange & Blue should be fresh in advance of the 2nd round of the Dirty River Derby. Their first match in league play ended as a 1-1 draw but was well known for the “BiteGate” incident between Djiby Fall and LouCity’s Niall McCabe. A lot of words were shared and feeling hurt but FCC & Djiby were able to get revenge in their Open Cup match as the Senegalese striker netted the game winner. You can expect a raucous environment down in Louisville Slugger Stadium Saturday night and here’s how some of the staff here at CST feel things will transpire.

Rain, Rain Go Away. It looks as if our trip down to Louisburg Town United will be dry compared to the swamps of Florida. This will be a big match for at least 3 members of FC Cincinnati. Aodhan Quinn and Kadeem Dacres are making their return back to the baseball stadium with carpet whereas Djiby Fall may be walking into a snake pit of rowdy fans and comic-con goers. It wouldn’t surprise me if Dacres & Quinn don’t start due to that they both traveled down to Miami midweek. I hope to see 1 or 2 of the new players (Greig, De Wit, or Schindler) in the 18, but I’m not sure if I am ready to see them start. If I am Koch, I look to lock down the game and fight for 1 point away. We need points wherever we go so I am picking a conservative 1-1 scoreline. But I really hope Djiby pulls and Indiana Jones and lights the snakes on fire.

Oh Loisville, we finally get take partake in FC Cincinnati’s favorite rivalry again. Last time around we sent LCFC home from the Open Cup and that team down south failed to get their Bitegate revenge. FCC had some normal rest for the first time on a very long stretch of games with the cancellation of their mid-week match in Miami, but that is coupled with the news that 3 regular members of their defending line were injured and additionally Andrew Wiedeman. I feel that their availability and the rescheduling date for the Open Cup will decide what lineup we’ll see and maybe the outcome of the match. Regardless, I’m willing to put my money on a 1-1 draw vs Loisville.

I had to give my prediction on the pod before the midweek rain out and I’m still going to stick with it even though I feel our chances of picking up points has increased. FC Cincinnati has shown they’ve been in a much better run of form as of late but were broken down by an organized and skillful Tampa Bay team. Louisville may not be as talented but they are just as if not more organized. I may not like James O’Connor’s postgame antics but he’s one hell of a coach. His ability to juggle the lineup and have his team in 2nd place with just 20 players, 17 of which are field players, is incredible. Add to their injuries and national team call-ups and I have to think he’s one of your leading candidates for coach of the year. FCC had a busy week even with the rainout and I have to think it still hurts our game preparation. LouCity had this game circled since the Cup loss and I think that gives them an edge this go around. Come On You FCC but unfortunately, I see this as a 1-2 loss for the Orange & Blue.

Here we go again, time to break out the ol’ catcher’s mitt and box of Halloween costumes. I’m not sure if I’m going with my favorite wrestler get up, or the most underrated DC villain, King Shark! CHOMP! CHOMP! Regardless of what distractions may be in the stands, let’s hope our boys can focus on hurdling turf staples and avoiding the mound. I see Koch going full strength, with the exception of Delbo, new boys deWit and Greig seeing minutes, and the Orange and Blue defeating LCFC 2-1

For your viewing pleasure, “Bill from Kentucky”. 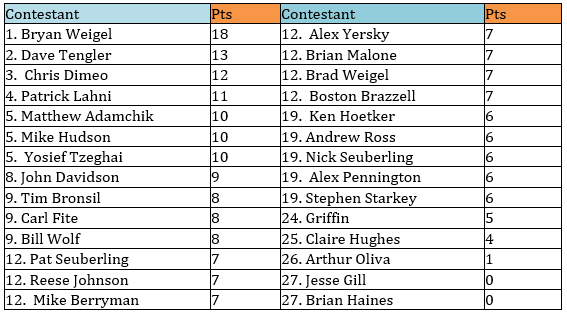