After taking a point on the road in Orlando, FC Cincinnati heads south to face fellow MLS expansion candidate the Tampa Bay Rowdies. In the 1970’s- 1980’s the Rowdies were known for their star flair with players such as Rodney Marsh, Farrukh Quarishi and Oscar Fabbiani and this rendition is no different. The club is led by a 3 time FIFA World Cup veteran in English midfielder Joe Cole along with former German international Marcel Schäfer. Each and every game we do our best to predict the outcome of the FC Cincinnati match. Here’s how some of the staff here at CST feel things will transpire Thursday night vs. Tampa Bay.

Some people have said the victories vs. Chicago and Columbus were statements made about how good this team is. I say, that a win tonight in Tampa Bay would matter more for the 2017 version of FC Cincinnati. Those first two matches showed that we could lock things down and scrape out a win. Going toe-to-toe with a top team in the East at their home could send some shockwaves through the league and show that FCC is really turning the corner. Let’s face it, Tampa hasn’t won a game in their last 7 tries in league play. They are reeling. The Rowdies still have an impressive squad, but FCC should be able to go at their back four. I don’t normally try to pick on passion, but I 100% am here. 2-1 to the Soccer Ball Kicking Good Guys of FC Cincinnati.

FC Cincinnati is on a great run but if there is a match to throw, this is the one. Tampa may not be in their best form but to go down there and get 3 points, let alone 1, is a lot to ask for with the number of matches we’ve played over the last 2 months. These guys need a rest so I think you could see some squad rotation similar to the Rochester away match. Look for Halfhill for Delbridge, Dominguez in midfield, and Konig up top. We still have the talent to compete but I think Bill Edwards will want to throw out his best lineup to try and use this as an MLS expansion contest. Add to the frustration of back to back losses for Tampa and I think we’ll see a hungry squad. I think it’s going to be a 0-1 loss for the good guys. No sweat though, it’s important to prioritize and get all 3 on Sunday vs. Richmond and to be fresh for next Wednesday in the US Open Cup.

The FC Cincinnati back line is deep but it has one constant, Harrison Delbridge. Harry got banged up a bit against Orlando and has played every minute of USL play and US Open Cup play since the Rochester match. He is going to need rest soon and it could come in the Tampa match. Tampa Bay Rowdies are going backwards after a great start to their season. FC Cincinnati has had some great wins of late but has yet to prove themselves in a top flight USL match. In a tough to call battle, I predict another disappointing draw. It will go down 1-1, despite both teams having the power to break the game wide open.

We are about a week removed from possibly the greatest victory in FC Cincinnati’s short history. This match holds a significant amount of importance in the playoff race and a victory can result in a 6 point swing in the race for a home playoff game. Perhaps the biggest question going into this match is the health of Harrison Delbridge. The Aussie left late last Sunday with an injury. He is due for a game off, but we at least hope for an update on his status. These two squads are trending in opposite directions leading me to predict FCC will give the Rowdies a 2-1 kick in the grass.

The orange and blue headed to St.Pete after a draw in Orlando and some midweek rest in the Sunshine State. Expecting to see another change in the starting 11, I think Koch will send out a strong lineup while keeping Wednesday’s match against Miami in mind. My prediction is a 2-0 victory for Cincinnati.

Check out our live show from this past week for the rest of our staff picks! 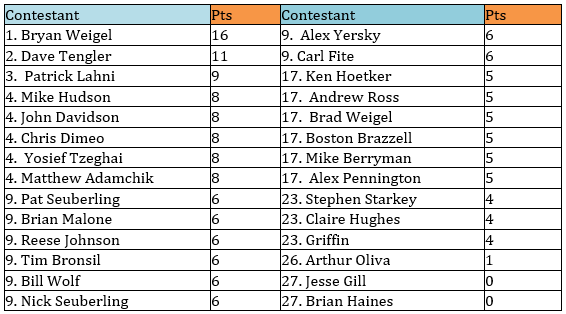