Andrew’s Wiedeman’s thrilling 80th minute equalizer earned the Orange & Blue a point in a 2-2 draw against league-leading Charleston Battery. This week Preki and Saint Louis FC come to town for a rematch of the 4-0 FCC win earlier in the season. That game was highlighted by 4 goals from Djiby for the first hat-trick in club history. Each and every game we do our best to predict the outcome of the FC Cincinnati match. Here’s how some of the staff here at CST feel things will transpire Saturday night vs. Saint Louis.

St. Louis has had their own tough stretch as of late. I view FC Cincinnati and St. Louis as teams in a similar predicament. Both teams are performing slightly under expectations and both need wins not losses and draws to turn the season around. I believe this battle will be a hard fought one. St. Louis has the added challenge of getting over their last defeat at Nippert Stadium. FC Cincinnati is on a trend upwards. I predict the Orange and Blue win 2-0 and ride the wave of momentum. Landing a win vs the Columbus Crew and drawing Charleston Battery are both good results.

This will be an interesting weekend, will FCC roll out a full strength team with Chicago coming in on Wednesday? I am thinking we see Victor Mansray up top, this accomplishes two things. First, it places Vic in a more natural position for him and the second thing it will accomplish is rest either Djiby or Danni. I think Vic shows moments of brilliance and creates some space for one of our Mids to slip a ball past St Louis. We withstand the STL attack and close out the game with a 1-0 victory. Vic’s play allows the Double D’s to not play a full 90, which will be another major accomplishment.

Ol’ St Lou rolls into town looking for redemption for the Djiby smackdown they received earlier in the season. With FCC packing their schedule with a glorious open cup run, I imagine we will see plenty of lineup changes and reservation of minutes. I believe we will come out strong and defeat the Eastern Conference foes, 3 to 1.

It doesn’t seem all that long ago that Djiby Fall struck the back of the net 4 times against Saint Louis and the Blurange faithful are hoping for a similar result this time around. It’s no secret that the club will be beginning their toughest stretch in the club’s short history of 5 matches in 16 days so I’m unsure of the squad rotation we will see, but I think it won’t be drastic as it was against Rochester (if there is squad rotation at all.) I highly doubt we will see a blowout as FCC had in their last tangle with STL. At any rate, the Cincy Rough Lads should be able to gain some ground in the playoff race and I predict a victory by the scoreline of 2-1.

Saturday kicks off a stretch of 5 games in 16 days and as you’ve seen in other predictions, squad rotation will be critical. While 3 of these matches might be at home, the other two will be in the oppressive summer Florida heat. Taking into account Wednesday’s enormous US Open Cup match against the Chicago Fire and Coach Koch will have his hands full in figuring out who to trot out in his XI. If I was in charge of the team sheet I would run out 1 typical target forward (Djiby/Konig) and one underneath forward (Wiedeman/Fordyce/Mansaray). They are going to key on Djiby if he starts so we’ll need the other to be on his toes and pounce on any deflections from crosses into the box. They’d be foolish to leave a CB 1v1 with Djiby or Konig and I think this creates a ton of matchup problems. I get burned every time I pick more than 3 so I’m going with a 2-1 FCC win. 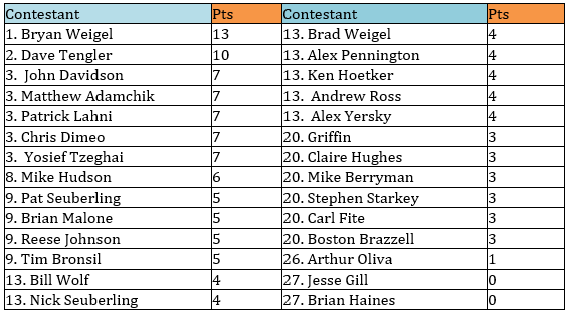