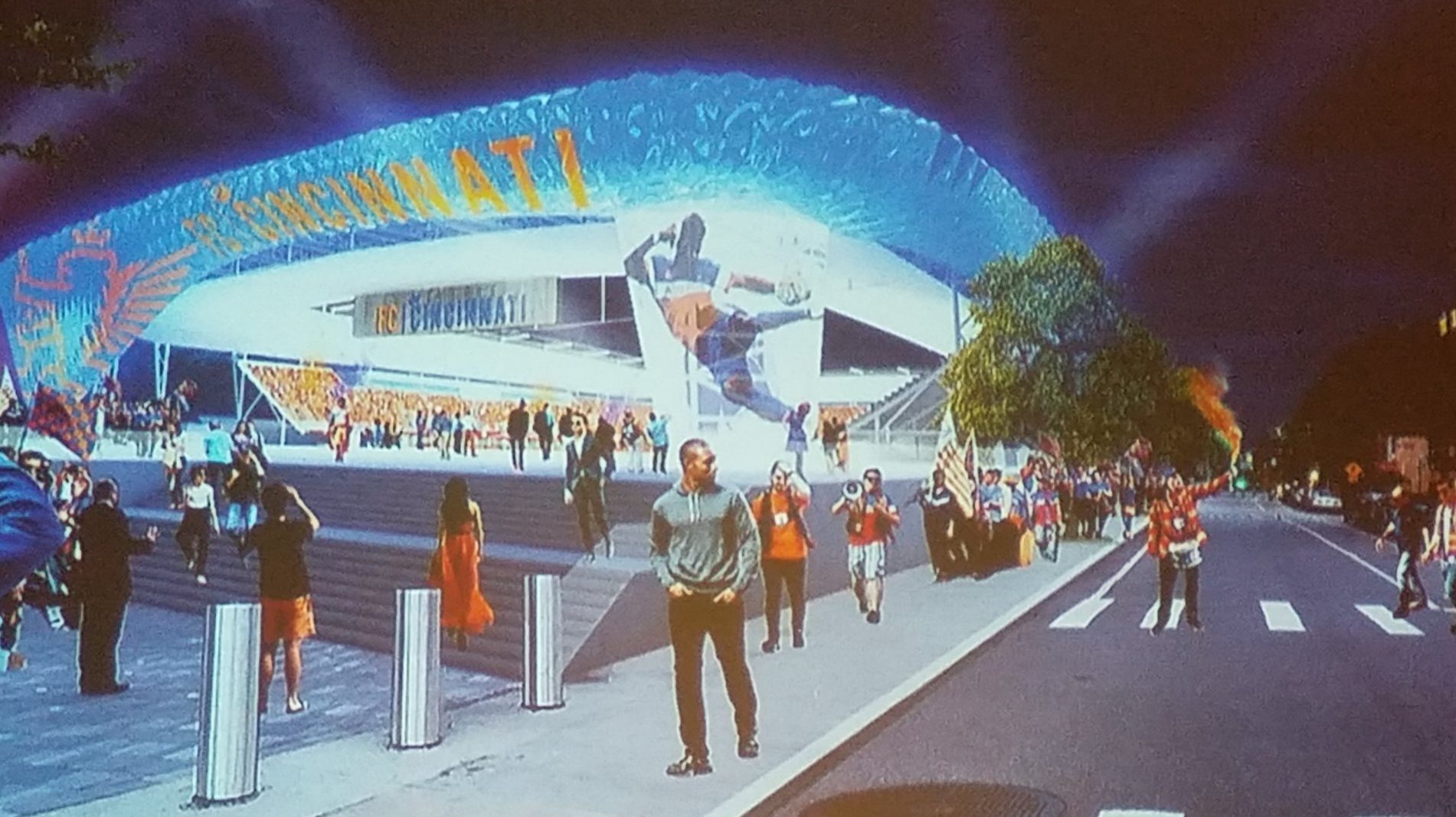 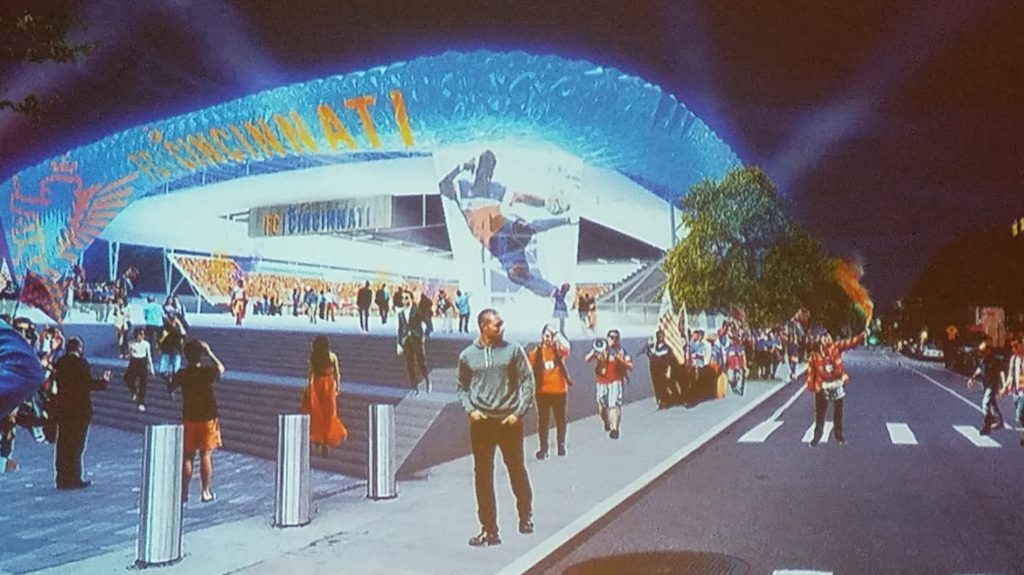 A few weeks ago, we commented that it was FC Cincinnati’s time to take center stage in the MLS Expansion race. On Monday night they did just that. FC Cincinnati unveiled their first stadium renderings and opened up the floor to around six hundred season ticket members at a town hall meeting. General Manager Jeff Berding, Owner Carl Lindner III and lead architect Dan Meis worked to answer as many questions from supporters as well as formally displaying part of their bid that was submitted to MLS. The line for the town hall went around the block as fans eagerly awaited to be the first to see stadium plan.

The event opened with words from Carl Lindner III as he stressed the commitment of the ownership group on winning a MLS expansion bid. Lindner reminded us that Cincinnati already fights above its weight class, and an MLS team would continue the trend of putting Cincinnati on the map in the United States and worldwide. The mic was then handed off to Jeff Berding for an MLS expansion bid recap.

Berding announced that three sites (Oakley, Newport, West End) are all currently being evaluated for expansion. A big wrinkle appeared when Berding stated that the Newport site was submitted to MLS in their proposal. While the land is currently available, Newport is not the guaranteed site as the team will continue to work with Cincinnati leaders on the other sites. The city of Cincinnati will need to work further with the club if they want the stadium on the Ohio side of the river.

The team President/General Manager said MLS expansion will happen regionally. This means FC Cincinnati is less threatened by western bids and more threatened by eastern cities (Charlotte, Detroit, Tampa Bay, Nashville, and Raleigh). MLS expects clubs to be financially viable and Cincinnati’s attendances along with a Soccer-Specific Stadium checks off several boxes in the bid. During his presentation, Berding claimed that weakest part of the bid is indeed the TV market which is in the mid 30’s nationwide. However, he did offer a clever quote that riled up the crowd, “If Cleveland can claim Akron/Canton, we can claim Dayton, right?”

Lead architect Dan Meis, (Meis Architects) was invited to unveil the proposed stadium design and inspirations. Meis has 25 years of stadium-building experience and designed Mapfre Stadium and Paul Brown Stadium among others. Home field advantage and crowd noise were major factors in the stadium design. The proposed stadium will seat 25,000 fans and will be expandable up to 30,000. As Meis unveiled the renderings, he spoke on several prominent features including a lighted canopy and a partially open side with a fan deck. The “bowl seating” would go all the way around the stadium Meis assured. Safe standing is currently planned via fold down seats.

Fans seemed concerned that a modern stadium would not fit in if the OTR/West End site was selected. Meis said the stadium design is not final, and an OTR site would change the final design. For example, more brick would be used at the OTR site.

Not many new details emerged on the financing of a stadium. FC Cincinnati will now start to work with local governments but emphasized no new tax will be raised. FC Cincinnati wants to use a method of public/private financing that will have no new impact on citizens. The club feels they can use the same methods used for the Banks and other local projects to get the job done. Lindner and other owners have currently committed $250 million to an MLS bid. $100 million is for a stadium after the $150 million expansion fee.

So what do you think? Leave your comments below or call into Tuesday night’s live show at 8 p.m.!