The Orange & Blue had a disappointing end to a 4 game win streak in all competitions. Coach Koch ran out almost an entirely new Starting XI as they fell 1-0 in Rochester. This week Enzo Martinez and the Charlotte Independence come to town for the first of 3 matches in 8 days for FCC. Each and every game we do our best to predict the outcome of the FC Cincinnati match. Here’s how some of the staff here at CST feel things will transpire Saturday night in Rochester.

What to do……There is realistically a chance that we see a similar side to that of the Rochester match last weekend. If this were my team or if I was the head coach of FCC on FIFA, I would hold out my best players for the midweek feature, but then again, I could always replay the matches after cleverly saving my game. You know what, let’s say heck to this Saturday’s match and go full bore on Columbus. Due to that feeling and potentially similar feelings with the FCC staff (hopefully), I say we scrape out a 1-1 draw at home. What is there to really lose here? We have 19 USL matches after this, so let’s settle for going for the cup match on Wednesday.

So FCC rested a large portion of its core against Rochester and lost.  Now they have Charlotte coming to town followed by a USOC match against the Columbus Crew of the MLS.   The question is, will FCC really be focused on the Independence Saturday?  My guess is the boys in orange and blue will be a little off because I am predicting there will be a few missing pieces out there. Look for Charlotte to start attacking quickly, the starts of games seem to be rough for us. However, FCC will withstand the initial pressure and eventually find its groove in the second half. Coach Koch will bring on a late offensive sub allowing for the Danni and Djiby (Double Ds) to play up top together for the first time. This combination proves to be too much for the lesser Queen City (Charlotte) and FCC pulls out a 1-0 victory to take the first leg of the Queen City Cup.

Will he or won’t he start? Djiby’s 6 game suspension came to an end making him eligible for Saturday’s match but with the Crew looming large on Wednesday, will Koch start him? With Danni Konig in fine form, put Djiby on the bench leaving him as a late sub if needed and fresh for the “Hell is Real” derby. With expected temperatures near 90 and Charlotte’s midweek match, it favors a fresh FCC. Both coaches will need to watch for fatigue from their players and limit mental errors because of it. On the hot playing surface will either team want to make this a track match? I think not and that’s why I like Cincy’s chances. Austin Berry & Harrison Delbridge will have air superiority on set pieces in the box and bet one if not both knick a goal. 2-1 FC Cincinnati and a little positive momentum heading into the biggest game in this young club’s history.

The boys in blurange are coming back to Nippert this weekend to face Charlotte for the Queen City Cup. The team was rested last weekend in Rochester, but with Crew SC on the horizon, I’m not sure of Coach Koch’s intentions with the lineup this weekend. At any rate, the team will need to get a W this weekend to keep pace with the rest of their conference. I’m looking forward to seeing our backline handle Charlotte X-Factor, Enzo Martinez. He played limited minutes midweek in Louisville so he’ll be well rested for Nippert on Saturday. FC Cincinnati fans should be excited to have Djiby Fall back for league play and I foresee that leading to some open space and extra chances for the offense as a whole. The good guys will come through with a 2-0 victory in front of the home crowd. 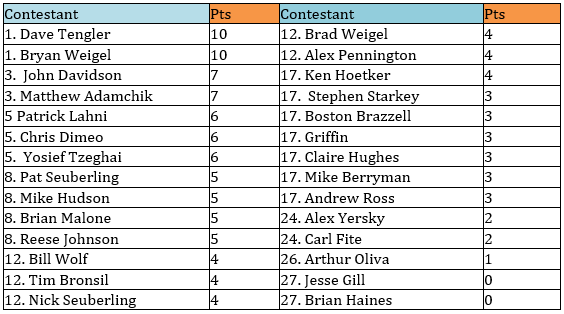