Each and every game we do our best to predict the outcome of the FC Cincinnati match. Here’s how some of the staff here at CST feel things will transpire Saturday night in Rochester.

FCC rolled out their starting XI again (with minor adjustments) for a midweek win against LouCity. Now they travel to Rochester for their 3rd game in 8 days. Squad rotation is going to be critical to keep the boys from making critical mistakes. Rochester didn’t have a game last weekend but did play in the open cup on Wednesday. They played 120 minutes scoring in the final gasping moments to advance. The game this weekend is the second of 4 games for Rochester in 1 1/2weeks. Squad rotation is going to be critical for them as well. So it all comes down to how deep each team is, who is more gassed and how the coaches each decide to prioritize this match. Rochester is just starting to get into the grind of the season (only 7 games so far) so these 4 games are going to be long for them, however, they are undefeated at home (2-0-2). I think FCC is poised to change that coming in on a 4 game winning streak. The team believes in itself and will do whatever it needs to to grind out a win. Last chance for Danni to prove his value before Djiby enters the USL mix again. 2-1 with another brace from the King.

You know what can stop a rhino? A lion, a knifey soccer lion of course. Coming off a huge victory against (ya know who-iville) , I’m sure some of the squad has not come off their adrenaline high. The work and camaraderie of the orange and blue are starting to come to fruition, and I think it will begin to result in dubs. Let’s keep climbing the table, there are not many points between 3rd and 11th. I see FCC leaving Rochester with three points on a TWO to NIL victory.

Winners of 4 straight, FCC travel to Capelli Sport Stadium riding high. Coach Koch out maneuvered James O’Connor midweek and will now have to face legend Bob Lilley. Lilley’s squads are notoriously difficult to beat, especially at home. Look for some starters midweek to sit and even a possible appearance by newcomer Josu (he made the trip). I think that the depth FCC can runout is 2nd to none in the USL and they will hand Rochester their first home defeat of 2017. 1-0 for the reinvigorated FC Cincinnati squad.

It’s been a long stretch for FCC and with the recent match against LCFC I think some of our starters may have tired legs. It will be interesting to see if Coach Koch chooses to rotate his squad to account for this being their third match in 8 days. Regardless of the lineup, Rochester is staunch defensively and I cannot see them giving up multiple goals against FCC, especially at home. That said, the boys in Blurange have been hot as of late. I’m hoping for a 1-1 draw this weekend for the FC Cincinnati Soccer Ball Kicking Good Guys.

FC Cincinnati is hitting a stride and I think it is due to my 2-1 picks. Sure, they never win with a 2-1 scoreline but they do win. If it ain’t broke don’t fix it, am i right? Casting the superstition aside for a moment, Rochester is a team under an identity crisis. Picking the score-line for this game is tough because we have no idea what Rochester team is going to show up. They lost 5-0 vs Charleston, won 4-0 vs Charlotte, they recently tied a poor form Richmond team, then beat 2nd place Tampa Bay a few days later. The Rhinos don’t even know what they are going to do on Saturday. Coming into Saturday’s match, I expect Rochester to play a counter based attack. I am hedging my bets that Cincinnati scores first and rips away the Rhino game plan. 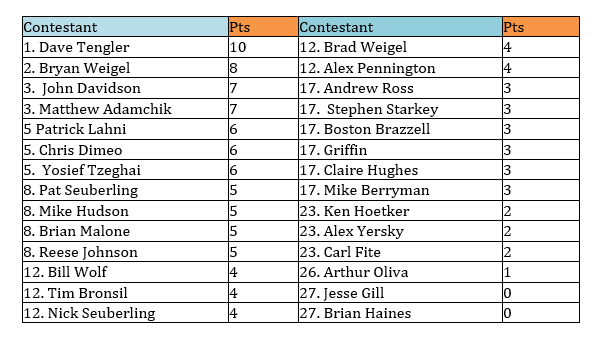