Last Saturday, FC Cincinnati came away with a point after a late Jimmy McLaughlin goal to clinch a 1-1 draw at Richmond. This week, the club gets some much-needed home cooking as 8th place Orlando City B comes to Nippert. Each and every game we do our best to predict the outcome of the FC Cincinnati match. Here’s how some of the staff here at CST feel things will transpire Saturday night when the Orange & Blue face the Purple Lions.

I feel a lot better about this match after seeing our 2nd half performance at Richmond and knowing we won’t have to take the squad to Iowa for a match Wednesday. I think the 1st quarter of the season has been rough on the boys. A coaching change, Red cards, roster shakeups, and poor form drained the team mentally. With one away game between now and July 1, the next month and a half should put less strain on the guys and allow them to recharge their batteries to get them ready for a strong finish to the year. That being said, Orlando is no slouch. They’ve had strong performances so far and will provide a tough test for a team struggling to find the back of the net. I’m going to go with last season’s trusted 2-1 to FCC. Hopefully the extra help from the 12th man at Nippert will allow us to put away some of the chances that have gone wanting from earlier in the season.

I believe the Orlando City B game will be tougher than many of my colleagues. Orlando runs out a very young squad of players that makes mistakes but also plays with spirit. This is the type of squad that will play better in front of a large crowd, even if it is not their own. If Cincinnati can capitalize on the mistakes that are made, the game will be theirs. I predict a 2-1 win for FC Cincinnati but the pessimism in me tells me an upset is very possible.

May 13th, it’s 5 1 3! Cincinnati day! No way we lose! Back at home in front of supporters eager to see a win, the orange and blue take on the B squad from Orlando. I don’t think we will see a full ninety minutes from King Konig but I can see Danni igniting the crowd with a goal from great service from the midfield. I see the defense stepping up big, leading KSLK to a two to nil clean sheet. Victory Orange and Blue.

Quote from Alan Koch on Reddit –“It is fair to say there was a lot of emotion showed in the change-room at half-time of the Richmond game.” I’m picking FCC to win 2-0 because I finally heard coach had a breaking point and this team needed a good tongue thrashing. This team is too talented to not succeed. I’m thinking 0-0 at half but a goal in the first 10 minutes of the second half to open the game up and another strike to demoralize the lion cubs. 2-0 and a Widmers clean sheet FCC

Orlando and Cincinnati sit tied for 7th in the standings. Looking Orlando’s and Cincinnati’s last 5 games, they are equal as well (1-1-3). If we look at home versus away records, we start to see some differences. Looking at Orlando’s away record, they have not been strong on the road (1-2-1). Cincinnati is undefeated at home (1-0-2). We can also do some direct pairings to confuse matters even more. St. Louis – Cincinnati wins, Orlando ties. Tampa – Cincinnati ties, Orlando loses. LouCity – Cincinnati ties, Orlando loses. Bethlehem – Cincinnati loses twice, Orlando wins. I can’t make sense of Bethlehem other than to say that the first game was a fluke and the second game they were in our heads…… Beyond that, in common match ups we’ve been the stronger team. Add in that we get a huge boost at home and I see this game going well for the Orange and Blue. The challenge we face right now is putting the ball into the back of the net with Djiby off the pitch. The team is adjusting to the change and we’re seeing more build up play and shots so that is good, but Wieda hasn’t been very effective up top and it is unclear whether Konig will make an appearance for this game or not. I feel like with the home crowd and some additional time since the “red death” we’re due to start to click again. Looking at the Orlando attack, all of their goals have come in the run of play within the box. FCC has struggled with set pieces and distance shots so that gives me some confidence in the defense as well to hold strong. I’m going to predict a 2-0 win and clean sheet for the KSLK. 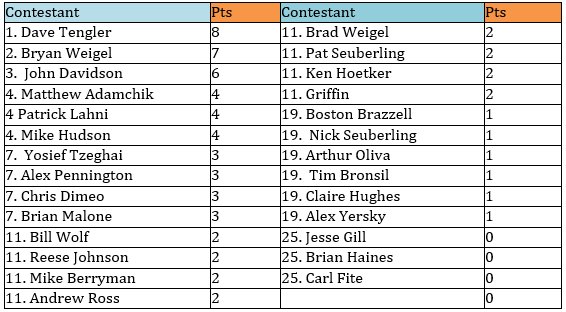