Last Saturday FC Cincinnati lost 1-0 away after Bethlehem Steel FC scored a goal in dying minutes of the second half. This week, the club travels to Virginia to face the Richmond Kickers with potentially a new player on the FCC roster. Each and every game we do our best to predict the outcome of the FC Cincinnati match. Here’s how some of the staff here at CST feel things will transpire Saturday night when the Orange & Blue face the Kickers.

For the first time in the club’s short history, doubt is starting to creep into my head. As an eternal optimist, I say “Yes, we can trust the coaching staff, the front office, players, etc.” But at what point do we change our view from the team who was supposed to be a conference title contender to a group scrapping for a playoff spot? It’s not like the team has played 3 games. They’ve played 7 plus their preseason and outside of 1 match, they’ve had issues scoring goals. I’m glad our team has the ability to control the majority of possession but that final 3rd, but their killer instinct has been lacking. I can trust all I want, but if the results don’t start to change then this becomes a “fool me twice, shame on me” situation. My head says 0-0 but my heart says we will have to progress and that we are too talented to not start clicking. I don’t want to see our players apologize on Twitter. Go out and make something happen on the pitch! Who is going to be that man to say, “give me the ball and get the heck out of the way?” I’m going with a 2-1 victory because I honestly have no clue what is going to happen, but for the love of this city please show us something that we can get excited about again!

We need a win and I think Richmond is the team to give it to us. FCC will have to work hard for a goal because they will be without Andy Craven and Djiby Fall up top. It will be interesting to see who starts. Wiedeman took point last match and while the team created chances, they struggled to finish. I’m hoping Big Cat is able to get some minutes and make an impact whether it be as a starter or substitute. One thing FC Cincinnati has in their favor is Richmond has trouble creating chances so I think a Widmer’s Clean Sheet is in our future. I see a 1-0 victory for FC Cincinnati.Kings.

It’s time to be the pessimist again. We are going to Richmond, VA where nothing thrives including the Kickers Offense. I think the pressure is building in FCC and we are going to see either one of two results, we either go wild and score 3 goals or we struggle to find the net against a rather strong defensive team. Until I see a consistent score line from FCC I am going to remain the pessimist and predict a 1-0 Loss —  but I will be ecstatic if I am proven wrong.

Another day on the road for Koch and club, and another day of uncertainty for the Orange and Blue supporters. Heading to Richmond to face the Kickers, let’s hope we can beat the Red without being shown a red. Another match with another suspension, we will perhaps see a different striker in Orange on the pitch. The chances are there but the finishing has not. I predict the knifey soccer lion kings will finally capitalize on their chances and defeat the Kickers; Two goals to nil. 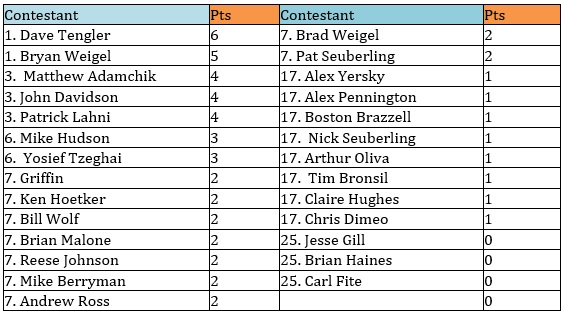