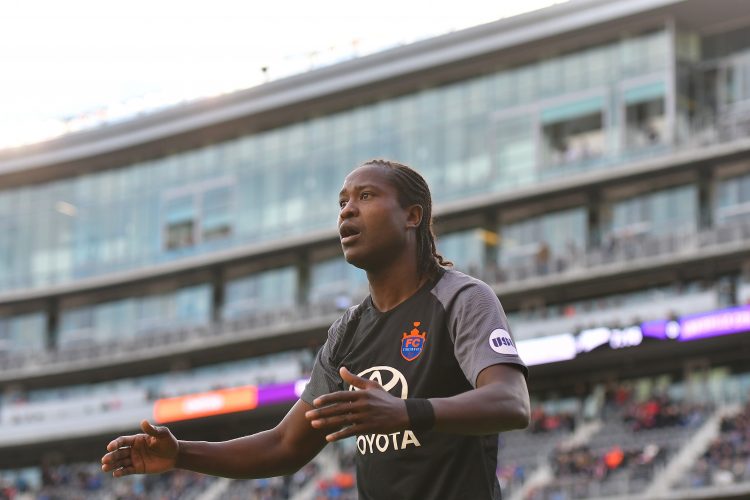 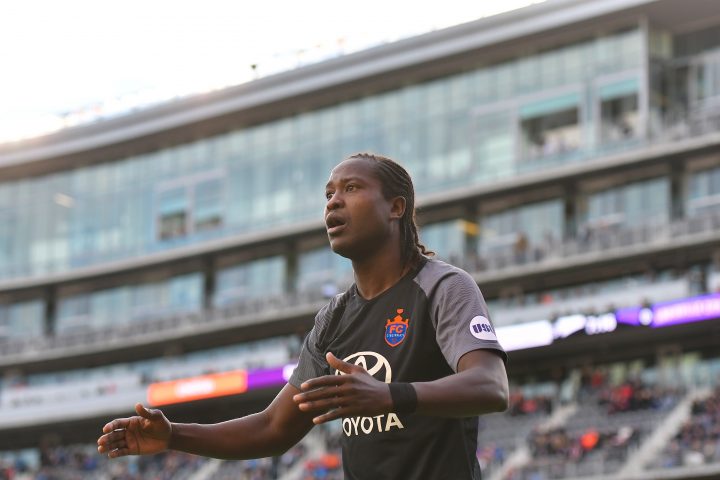 The suspense is now over as the USL released their Week 5 Discipline Report and on it was FC Cincinnati Forward Djiby Fall. Djiby received a 1 match suspension for the red card received at the end of Saturday’s match for the foul on Louisville City’s Kyle Smith and an additional 5 games for “Major Game Misconduct” after the alleged bite on Niall McCabe.

With 6 of the club’s 8 goals coming from Fall, FC Cincinnati must replace a huge part of their offense that finally looked to be clicking over their last 3 matches. Without a like for like “Target Man” on the squad, Coach Koch will have to juggle the lineup to replace his leading goal scorer. We take a look at a couple options the club could use the next month and a half.

Directly Replace with Mansaray or Craven

Coach Koch could look to plug in Vic Mansaray or Andy Craven up top in his 4-3-3/4-1-4-1. Mansaray has the closest skill set to Djiby but has seen most of his playing time so far on the wings. His big body size could work as a lone striker and should not get pushed around other team’s center backs. He is still raw so his off the ball movement might be a concern when trying to find space in front of goal. Craven brings a different skill set than Vic or Djiby and has yet to start for the club. I do like his creativity on the ball and his speed could help unlock the match. My main area of concern is his body size. He might not have the physical presence of a player like Vic, but he has shown to have a chip on his shoulder and the swagger that won’t back down from defenders.

Move to a 2 Forward System

When things weren’t going well during the first 3 matches, some were calling for the move to a 4-4-2 to get Djiby some help. With Djiby out, a 2 forward system could set up perfectly for the return of Daryl Fordyce to the starting XI. You could see him partner with another player like Mansaray, Craven or Omar Cummings if fit. If you switch to the 4-4-2 you would probably have to remove one of Corben Bone, Aodhan Quinn, or Kenney Walker. These 3 have really gelled over the home stand and I would have a hard time pulling any of the 3 midfielders out of the XI. Through 6 matches we have yet to see the 4-4-2 with Coach Koch so this might be a long shot early in the suspension period. If the club struggles to score at Bethlehem or Richmond, I could easily see them move to this for the time being.

It’s unfortunate that FC Cincinnati has to even be in this position, to begin with. There are a lot of opinions on the matter but ultimately the blame ends with Djiby. We do not condone the actions of the player, and nothing good has ever come from going head to head with the player of another team, bite or no bite. Djiby will have to learn from this situation and move forward to help the team when he returns. Luckily General Manager Jeff Berding and Coach Koch have put together such a quality squad with a lot of attacking options that should get us through this stretch.

We as a fan base are always passionate about our club especially during circumstances like this. This unfortunate event does not show our club in the best light but it does not diminish all that we have done to grow the sport in our hometown. If anything it will only bring us more together and make our fan base more fervent and stronger and personally, I can’t wait until July 15th when we get to face LouCity again.