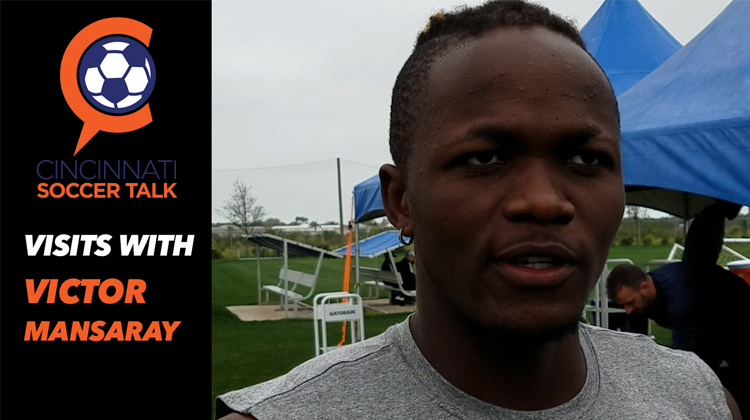 On Thursday, February 23rd, Cincinnati Soccer Talk was able to attend an FC Cincinnati training session at IMG Academy in Bradenton, Florida. Coach Koch described the training as short, light and fun and commented that it was more about recovery and keeping muscles loose after the game they played the previous afternoon.

After the training, we were able to speak with one of FCC’s latest signings, Victor Mansaray (#80). I noticed Victor when he showed up for training. He had a quiet intensity, and his eyes gave the impression of hyper-focus, like a shark watching prey. I’m not sure I’d feel safe standing between him and the goal. As you can see, Victor has a lot of confidence in himself and this club.

During the training session, the weather had turned a bit ugly, so the interview was done in high winds and drizzly rain which made it a little difficult to hear. As we talked, the other players were packing up, beating out their boots and leaving so there is a good bit of noise as well.

Check back to find out who else Cincinnati Soccer Talk catches up with next.