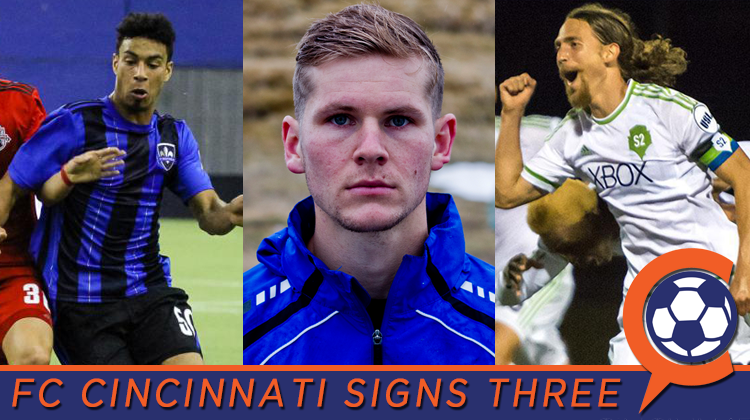 On Friday, FC Cincinnati announced the signing of three additional players for the 2017 season. Andy Craven (Seattle Sounders/OKC Energy), Marco Dominguez (FC Montreal) and Aaron Walker (BÍ/Bolungarvik), were introduced as the newest members of the Orange & Blue pending USL and federation approval. Here are some bios that we have put together on the newest additions.

Craven has represented the United States on the youth levels including playing on the USYNT 2009 FIFA U-17 World Cup team with current FC Cincinnati left back, Tyler Polak. Traditionally known as a goal-poacher who puts himself in good positions to score, Craven has been known to be physical in the box. While not featured on the field for the MLS squad in 2016, Craven did make many appearances in the gameday 18, before being waived in August.

Take: I’m not sure where Craven fits in yet. Does he slot in up top in a 4-4-2 or could he play wide in a 4-3-3? His scouting reports show that he displays energy and awareness on the pitch. The soon-to-be 25 year old is probably not someone who would do a bicycle kick like Okoli, but he could capitalize on the bounty of chances the FCC midfield could create.

Dominguez had an eventful 2016 with USL side FC Montreal. To kick off the year, Dominguez spent a large part of February on a training stint with Bologna FC (Serie A). Shortly after, Dominguez made a return to the Canada Youth National Team setup with an appearance for their U-20 team in a friendly with England. The 20-year old was playing well for the MLS2 side before sitting out almost two months due to injury. Dominguez ended the year looking for a new home after MLS side Montreal Impact announced that they would cease operations of their USL club.

Dominguez is regarded as a strong deep-lying playmaker who has good passing skills and can be physical for his size. He has scored once in his 37 appearances over the 2015 & 2016 seasons. At 5’9″, Dominguez may not be the tallest, but he plays a physical game. The midfielder led Montreal in fouls in 2015 and was third in 2016 though he played in far less games. He could add a toughness we need.

Take: Montreal expressed their commitment to developing players at the U-18 level and this could have been seen as a reason for Dominguez leaving Montreal in favor of Cincinnati. In The Link newspaper , Dominguez was listed as one of 6 FC Montreal players invited to the Impact preseason camp, so I am a little surprised he ends up in the queen city. This signing actually makes me the most excited of the four new additions.

Walker comes to FC Cincinnati through the clubs open tryout in December.

“We were impressed by Aaron during the Open Tryout last month and we feel are pleased that we have a player coming from our tryout for the second straight year,” said Head Coach John Harkes. “We think he will be a good fit.”

Walker, a Georgia native, played the 2015 season in the Iceland 2nd division starting all contests in the midfield and scoring a goal and an assist. The midfielder spent the 2016 preseason with the Charleston Battery scoring a goal off a free kick in their friendly vs. the College of Charleston. Walker played NCAA Division III soccer at Oglethorpe University from 2008-11 and was named a two-time All-Southern Collegiate Athletics Conference choice as well as an All-South Atlantic Region first-team selection.

Take: Again, I am not sure what to think about this signing. Through pictures I have seen online, it looks like he has some size. I would think that this is a depth signing, but I do like that he has pro experience.

*Stats may be incomplete

You can see all the 2016-17 off-season moves on our tracker page HERE.