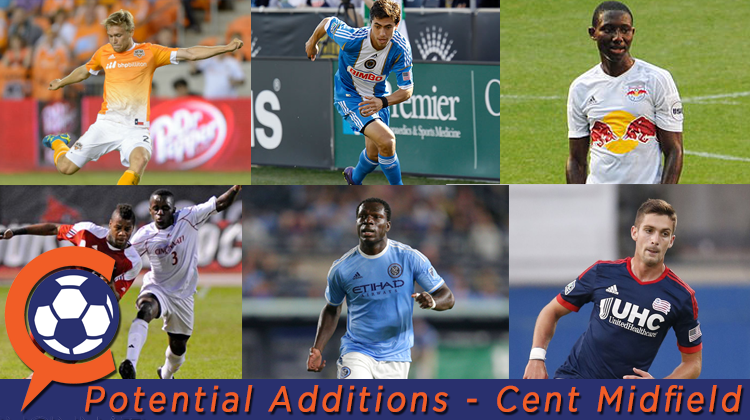 2016 marked a great inaugural season for FC Cincinnati, but now it is time to focus on the sophomore campaign for the Queen City’s pro team. To date, we compiled a list of realistic Forward & Winger targets that John Harkes and his staff could bring in for the 2017 season. As part three of our series on potential additions, we wanted to explore central midfielder roles.

FC Cincinnati employed a variety of lineups and options when it came to the central midfield. There were times when FCC used a 4-2-3-1 with 2 defensive central midfielders (DCM) and 1 central attacking midfielder (CAM) and other times when Harkes employed a 4-4-2 with Bone and Walker in the middle. We wanted to put some names that could challenge these two “incumbents” going into next season as well as several options if Harkes wanted a solid DCM to play behind those two.

General Manager Jeff Berding commented on several programs, including our podcast, that FC Cincinnati will be aggressive in the off season and I couldn’t think of a more important spot than up top. The landscape of the league is ever-changing. With the inclusion of Tampa Bay and their talented roster led by Joe Cole, we will include a “hyped” player on our list that could bring as much cache as talent.

Big Board of Central Midfielders 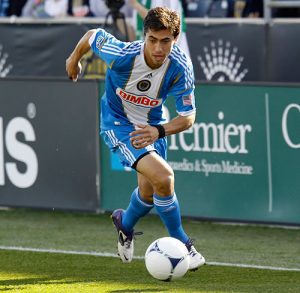 A former US Youth International and 2012 MLS All Star for the Philadelphia Union, Farfan spent time with Cruz Azul before coming back to MLS in 2015 with DC United & 2016 with Seattle. Farfan appeared in 17 games for D.C. United while only making 1 MLS appearance with Seattle in 2016. He is not an unknown to the USL tallying 7 appearances for S2 in the 2016 season. Traditionally a holding midfielder, the 28 year old made 82 MLS appearances from 2011-2013 for the Philadelphia Union. I could see him employed behind Walker and Bone in a 4-3-3 or a 4-1-4-1.

It could be worth FCC’s time to head up I-71 to look at 2016 NPSL National Champion AFC Cleveland for their next midfielder. In his 4 years at D-III John Carroll, Potocnik cemented his name as the best player in program history setting records for goals in a single season (20), games played (81), total starts (81), and minutes (5995) while tying for 2nd in Assists (35). Last season he was named in the NPSL Best XI netting 4 times in 7 regular season matches. 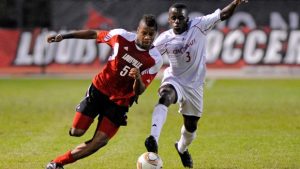 Former University of Cincinnati Midfielder Appiah made local news last year when he was drafted 15th overall in the MLS Super Draft by the Colorado Rapids. He spent time with their affiliate Charlotte Independence before he was released and signed by Sporting KC. Appiah spent most of 2016 with their MLS2 club Swope Park Rangers and starred in their USL playoff run to the USL Final. The midfielder was released in late November by Swope and could go into the MLS re-entry draft or be signed by a USL club. Appiah is diverse and can play in an attacking role or could be a workhorse in the midfield.

Stephens, a six-year MLS veteran could be an instant starter if signed by FC Cincinnati. Normally a holding midfielder, Stephens option was declined by the Fire after playing in 37 matches over the past two seasons. His 2016 contract (115k) could be cost-prohibitive, but the experience and ability to create chances could spur the FCC offense in 2016. In 2014, Stephens spent a season with Norwegian club Stabaek IF. He made 30 appearances for Bob Bradley’s side, tallying seven assists and scoring one goal. A little on the end of his prime at 27, Stephens would be a quality signing that would signal the desire to improve over an already talented midfield. 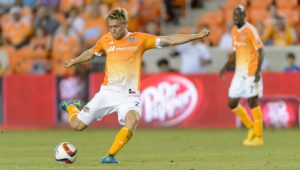 This 24 year old attacking midfielder put up impressive numbers for the Jacksonville Armada while on loan from the Houston Dynamo in 2016. Is 20 games, Steinberger scored 4 goals and contributed for 4 assists in 18 starts. His 80% passing percentage in the opponents half was impressive and the former Butler Bulldog could be an upgrade at play maker for FC Cincinnati. Steinberger also scored 2 goals in 12 matches for the Indy Eleven in 2015. His play peaked toward the end of the 2016 season which saw him named the NASL Player of the Week on October 31st. Steinberger can also go into the re-entry draft, but I could see Steinberger viewing FCC as a club where playing time could spring him back into MLS.

At 23 years old, this former US Youth International and RBNY Academy product has had plenty of experience in the past two seasons at RBNYII. Metzger logged over 1000 minutes in 2015 before succumbing to an ACL tear but came back to play in 31 games in 2016 scoring 3 goals while making an additional 2 assists. Metzger also scored a goal in New York Red Bulls (MLS) exhibition match vs. Club America. Metzger has been known to provide good defensive cover for the back four while being able to spring passes forward on counter opportunities. His contract may be more reasonable than other options and could provide quality depth for FC Cincinnati.

This Jamaican National Team member lives up to his nickname ‘Speedy’. The pacey play-maker was signed by NYRBII late in 2015 to make up for the loss of Derek Etienne to college, but when Etienne arrived in 2016, Williams starting position fell into jeopardy. After starting 11 of 12 eligible games in 2015 compiling 3 assists and 1 goals Williams played in 26 games throughout the 2016 regular and post season. Speedy scored once and set up another while transitioning to more of a support role for RBNYII. His 2016 season may best be known for his desire to improve his defensive game, but Williams could be the burner John Harkes may be looking for. Speedy can play a variety of positions including CAM, DCM and winger.

Let’s put this out there first. Garcia is signed with LA through 2017, but reshuffling of roster under a new head coach could see him being released. The holding midfielder provides a depth of experience to make up for his lack of size. Garcia stands at 5’6″, but has made over 50 appearances between the LA Galaxy and LA Galaxy II over the past 5 seasons. The California native would need some persuasion to move to Cincy, but playing with former midfield partner Kenney Walker could be enticing. Garcia would provide excellent cover and could allow Harkes to employ Walker and Bone higher up the pitch. There are several “if’s” to this situation so I am not putting this as a high likelihood, but one that could make a big impact. 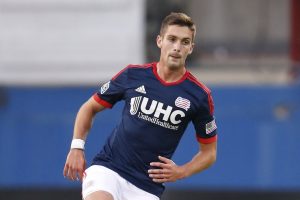 FC Cincinnati would be competing with some MLS clubs to sign this athletic play-maker. The 4th overall pick in the 2014 Super Draft felt playing time hard to come by over the past two seasons in New England. After appearing 23 times in 2014, Neumann made 13 appearances over the past 2015 & 2016 seasons. There were rumors of a falling out between Revs skipper Jay Heaps and Neumann following the 2015 season, so it was odd that he was picked up for the 2016 season. This is a skilled player who scored 41 goals and handed out 34 assists at Georgetown. The two-time NSCAA All American could use FCC as a springboard like Okoli if promised significant minutes. He can play in both central midfield positions or out wide. Neumann was speculated to spend time with Rochester in 2016, so it is feasible to see him drop down to USL.

The lesser-known Besler, is still signed to the Portland Timbers, but could be cut loose with an anticipated roster shake up. He is used at holding midfielder and spent the past two seasons with T2, but didn’t start in their final 5 games which I am taking as a sign of trouble. Besler logged over 1700 minutes in each of the past two seasons and would again provide depth in the FCC midfield. The 5th overall pick in the 2015 draft is known for his good passing and his ability to roam forward if needed. At 6’1″, Besler also provides some good size in the midfield that was needed in 2016. 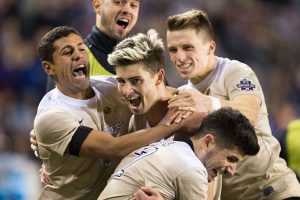 To be honest, Harkes will most likely be going in the MLS Super Draft and will not be available for FC Cincinnati. However, we have seen several high picks be released right before the season and I could see John Harkes giving a chance to his talented son. Was arguably one of the best midfielders in college soccer this season including scoring the game winning goal vs. Denver in the College Cup semi finals and slotting home a penalty in the final. Harkes could put some more muscle on his frame, but could be a great young player for FCC. 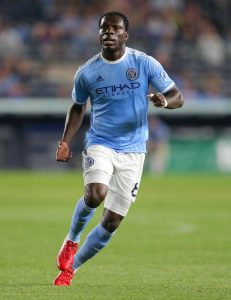 This player had the world ahead of him prior to the 2016 season. Poku was one of the breakout stars for NYCFC in its initial season in MLS in 2015, with four goals and seven assists. Chants of “Poku” rang out through Yankee Stadium and calls to the Ghana National team came after his impressive year. A change in head coach and philosophy saw a fallout with Poku and NYCFC. A transfer to Miami FC for a rumored 750K saw the attacking midfielder move after only 7 matches. Poku scored 6 times and had 2 assists for Miami FC in 20 matches and it looked like he may have found a permanent home. With all the turbulent news surrounding the NASL and the USL’s apparent non-interest at adding Miami FC could see this high-profile player looking for a new home. The midfielder/second striker was rumored to have been making 350K in Miami after receiving nearly 62,000 for the 2015 season. Poku would be a marketable face to the franchise and would elevate the club with many MLS fan’s knowing the former Sky Blue player.