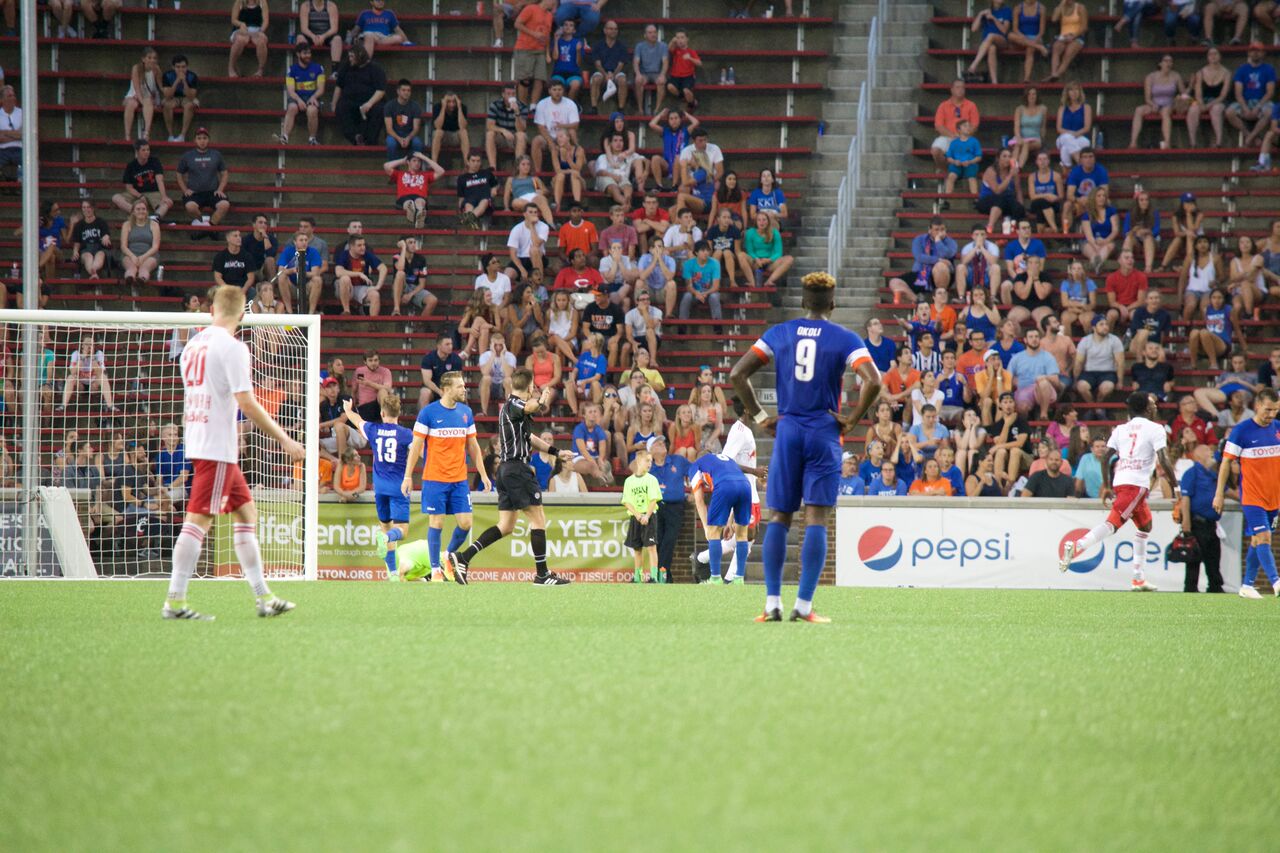 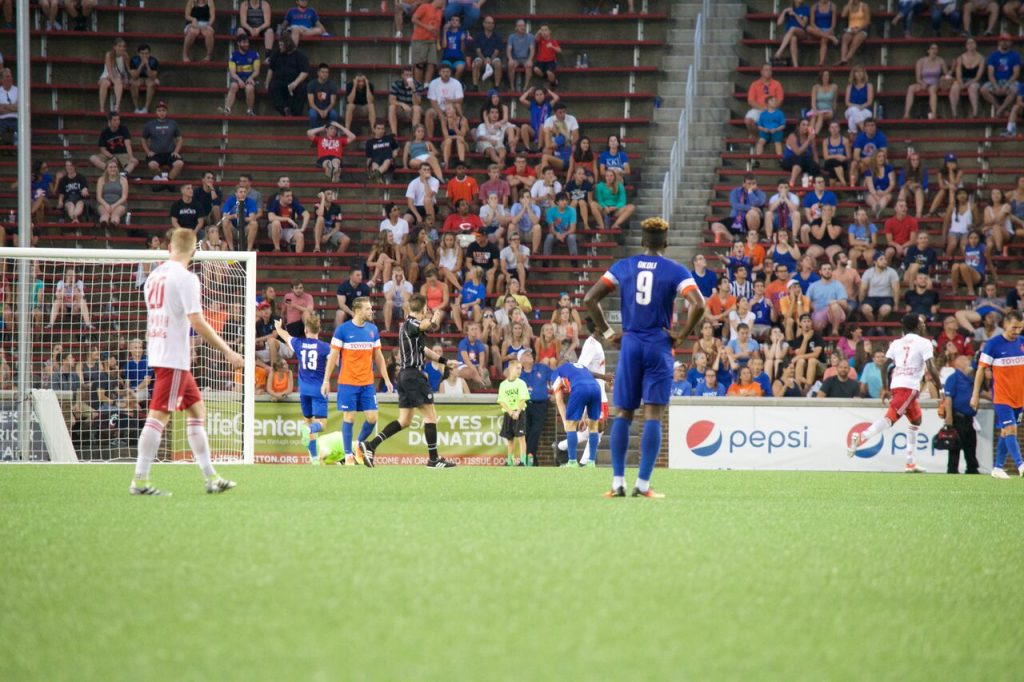 FC Cincinnati dropped Wednesday’s night’s match 2-1 in favor of New York Red Bulls II. The Baby Bulls provided a tough match up for a FC Cincinnati squad that lost arguably one of their most important midfielders 17 minutes into the game. The Orange & Blue struggled to find a rhythm in the first half, but turned the tide in the second after a formation change to a 4-3-3. Winger Jimmy McLaughlin scored a goal in the 60th minute, but FC Cincinnati couldn’t hold on allowing 2 goals in the final 10 minutes of regulation. Check out our player ratings from Wednesday night’s defeat.

Hildebrandt (GK) – 5: Positioning on NYRB II Free Kick was poor. Should have made that save. The winning goal was a phenomenal header. Still controls his box well, but the free kick goal turned the momentum.

McMahon – 5.5: The outside backs had plenty of pace to go against last night. I felt the McMahon played well, but was caught flat footed on the Baby Bulls second goal. When Lee turned the ball over, McMahon and Wiedeman were beginning to move forward and were a step slow to adjust back. 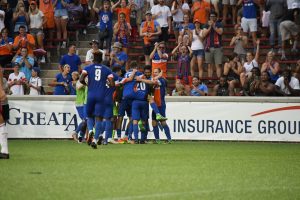 Berry (80′) – 6: Berry was a little lost on balls his way. Lost balls in the air and was out of position on several occasions. Was also pushed off the ball by players smaller than him. His talent is still noticeable and did have to make emergency defensive plays. Was aggressive when coming forward and his ability to read a play and press attackers did disrupt several NYRB II chances.

Nicholson (58′) – 6.5: Was asked to do quite a bit in this match. Nicholson was asked to switch into the midfield after starting CM Kenney Walker was subbed off for injury. He did give up some speed to Red Bull defenders, but his ability to read a game and snuff out attacking runs limited some chances. Did lose possession from time to time, but put in a quality shift.

Polak – 5.5: Similar to Nicholson, Polak concedes a speed advantage to several of the opposing attackers. This led to some bad fouls in dangerous situations. His mark did score the winning goal, but that was a great header. Polak has moments where he looks like a model LB in the league, but he needs to be more careful with the ball.

Stevenson (70′) – 5: Did not look comfortable at all in the first half on the right. Once moved into a more traditional #10 role in the second half, Stevenson blossomed. He can pick out good passes, but is still a step slow off the dribble. Defense is not his strong suit and he was taken advantage of especially in the first half.

Walker (13′) – NR: Walker picked up a “Turf Toe” type injury in the first half. This injury could have big implications for the weekend. 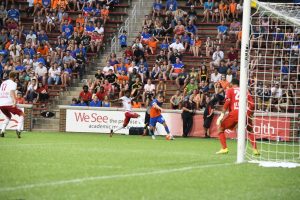 Bone – 5.5: Bone does get the ball into dangerous positions for FC Cincinnati, but was pushed off the ball forcing to several turnovers. Had problems with New York’s speed. Needed Bone to step up more after the Walker injury.

McLaughlin – 7.5: Had the lone goal for FC Cincinnati. McLaughlin continues to be a good creative presence when put up against good technical squads. The added touch to find more space before his shot was key. Covered a lot of ground on the left flank and had to pull back quite a bit in the first. Let us know what you thought of his dance moves.

Cummings – 7: Played well when he received the ball. Liked when he moved to the right in the second half, especially setting up the McLaughlin goal. almost created a second where Okoli was denied off the line. Found it difficult to get the ball in the first half in a deeper lying role, but still did develop several opportunities for the Orange & Blue.

Okoli – 5.5: Need to be more clinical on chances created vs. a quality defense like RBNY II. Okoli cost his team from netting a second goal by being lazy regaining his onside position. His goal would have given FCC a good cushion, but not keeping up with the Red Bull defensive line led to him being offside after a RBNY turnover and quick counter by Cincinnati. Had a good chance in the 2nd off a near post pass by Cummings but couldn’t direct it pass the keeper.

Delbridge (14′) – 6.5: Played well in a substitute role after the Walker injury. Gave up a tough foul for the tying goal that was a questionable referring decision. Made several great stops and saved Cincinnati from conceding a goal in the first.

Narbon (59′) – 4: Looked a little out of place. Did not link play up enough in the midfield and didn’t press the attack late in the match. Forgettable USL debut, but am optimistic for Narbon in future performances especially in a CAM role. 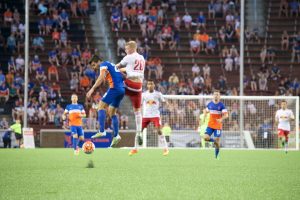 Wiedeman (71′) – 5: Like McMahon, was caught flat on the winning cross. Needed to do more as an impact sub, but was found behind the ball too much.

Lee (81′) – 5: Gave up possession that led to the winning goal. Would lose his mark and had to deal with several NYRB II players running at him.

Mohomed (ET’) – NR: Didn’t have much to do in his couple minutes of action.

Harkes – 5: It is tough to foresee any injury to Walker, but I think it would have been wise to start Wiedeman or Mohomed on the right since we knew Tomaselli would be out. Stevenson could have provided more depth in the middle and would have been my preferred sub in place of Narbon. Good adjustments in the second half.

Referee: Rosendo Mendoza – 0: How was Junior Flemmings not sent off on the reckless kick to Berry’s face. Noticed that he was out of position too often which led to bad calls from 30-40 yards away from the play. Repeated bad judgements to both squads.