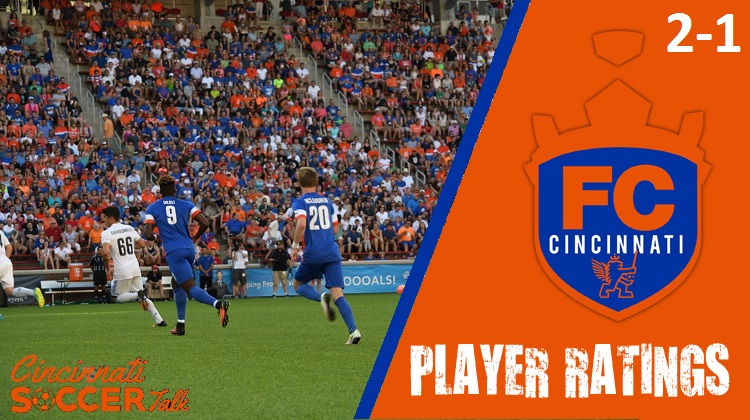 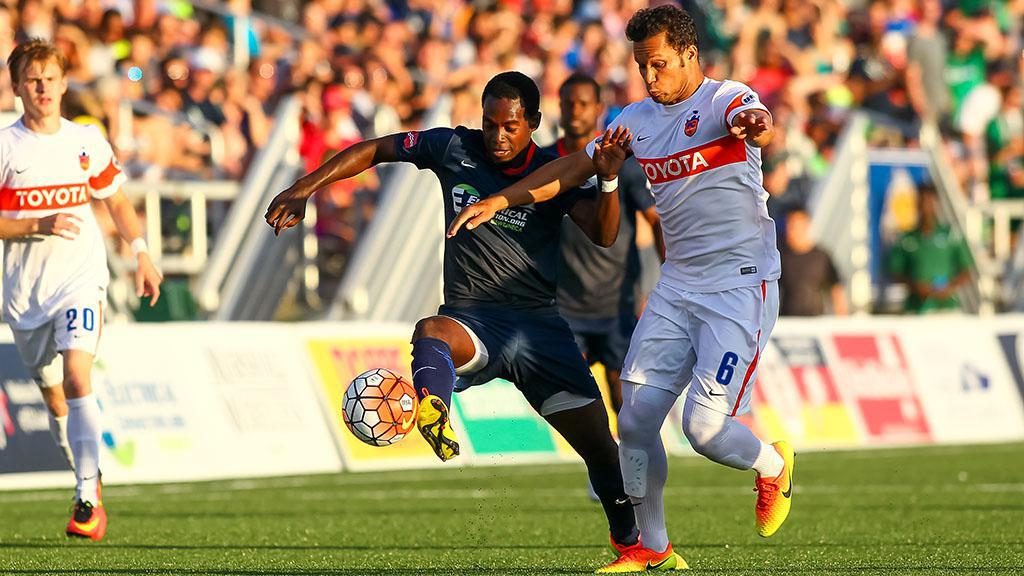 FC Cincinnati rebounded nicely after the road defeat Wednesday to beat a strong Saint Louis FC team Saturday night. FCC got on the board first in the 8th minute when Sean Oloki found Omar Cummings who slotted it past the STLFC keeper. The Orange & Blue had several great chances turned away but got a much needed insurance goal in the 78th minute when Eric Stevenson pounced on a shot from Cummings. The home team pulled one back in the 85th minute but FC Cincinnati was able hold off Saint Louis FC in the closing minutes to earn a 2-1 win.

Mitch Hildebrandt 90’– 7.5: Didn’t have much to do all evening and was fairly helpless on the STLFC goal when he was let down by the back 4. Made a great save in the 51st minute with a outstretched are to block a ball hit to the lower left corner. I like how he has continued to improve on his command of the box on free kicks and corners including his punch away in the 73rd minute.

Pat McMahon 90’– 7: McMahon held down the right side of the defense well. Gave away a ill timed yellow in the 57th minute after he was frustrated that a foul wasn’t called moments before when he was dispossessed. His decision making has continued to improve knowing when to attack or to stay back and defend.

Paul Nicholson 90’– 6.5: Quiet for most of the night. Failed to track back and got caught ball watching on the Saint Louis FC goal. Did well clearing away some dangerous chances in the last couple minutes frustrating the home team attack.

Harrison Delbridge 61’– 7: Didn’t have much to do for most of the evening. Got a little chippy before being removed for Berry. Does a good job keeping the back 4 together forcing several offside calls.

Tyler Polak 87’– 7: Polak is starting to look like a different player the last couple of games. He made a great play tracking back in the 47th minute to stop a STLFC counter and found McLaughlin in the 80th minute for a great scoring chance at the top of the box. His rating might have been higher if he didn’t get turned around in the 85th minute on the Saint Louis goal.

Kenney Walker 90’– 8: I can not say enough good things about Walker’s work rate. Partnering with Bone in the middle of the 4-4-2, they contained STLFC and didn’t allow MVP candidate Irvin Herrera to get started for much of the night. I also like his strength and ability to push attackers off the ball.

Corben Bone 90’– 8: I share much of the same regards for Bone as Walker with clogging up the middle of the pitch. His free kick nearly found the back of the net midway through the second half but goalkeeper Ryan Thompson had a tremendous save. Bone’s best play of the night was in the buildup to the 2nd goal. Bone alertly turned over Saint Louis FC deep in their zone getting the ball to Stevenson starting the sequence leading up to the goal.

Omar Mohamed 75’– 7.5: It was nice get see Mohamed inserting into the Starting IX and he backed up the coach by putting in an impressive performance. He gave the club a more aggressive look and pressed up high often forcing dangerous throw-in’s deep in STLFC territory. There were times in the match where he showed rust but his raw athleticism and speed warrant more looks the rest of the season.

Jimmy McLaughlin 90’– 8:Mr Steady brings it every game. He created some dangerous chances and pretty much has his name written down in ink in the Starting XI. His effort on both sides of the ball is impressive highlighted by his steal and counter in the 76th minute that garnered the admiration of STLFC broadcasters.

Omar Cummings 90’– 9: Cummings capped off his first start of the season with a goal and assist. His addition provides some much need support for Sean Okoli and the two partnered well on the first goal with Cummings slotting Okoli’s pass past Thompson. Cummings provided the assist on the second goal when his shot found the feet of Eric Stevenson.

Sean Okoli 65’– 7.5: Fared much better with some help from Cummings up top and had the assist on the first goal of the match. I’m looking forward to see the relationship develop further between him and Cummings. At times it looked like they were just a bit off but with some time should improve.

Austin Berry 29′ (Delbridge) – 7: I can’t be too hard on Berry as he continues back on the road to full fitness. Berry was able to head away a couple dangerous chances once inserted into the game.

Andrew Wiedeman 25′ (Okoli) – 7: Wiedeman came on in the 66th minute for Sean Okoli. Wiedeman dropped a little further into the midfield than Okoli and provided some much needed pressing help and an outlet for the FCC defense.

Eric Stevenson 15′ (Mohamed) – 8: Showed great reaction time jumping on Cummings shot to score the winning goal for the Orange & Blue. I like him much better as a super sub role helping out the midfield late.

John Harkes – 7.5: I really liked Harkes changes to the Starting IX and formation. Adding Cummings up top makes the team more dangerous causing confusion among the STLFC back 4 freeing up chances for Okoli, Mohamed, and McLaughlin. Stevenson had a direct impact after being inserted into the game grabbing the winning goal. I would have liked to have seen Luke enter the game earlier. Polak started to look gassed in the 75th minute before getting beat on the cross that led to the Saint Louis FC goal.

Supporter’s Group’s- 10: Die Innenstadt partnered up with the Freestore Foodbank and Rhinehaus to fill several bins full of food. It’s great to see the club and its supporters evolving off the field and in the community.

Great win tonight for @fccincinnati and @FreestoreFB! Thanks everyone for supporting and donating! pic.twitter.com/50cMn6LNLv