It was a beautiful night for soccer.  The kind of night where you bring along a coat in case the temperatures dip but never need it.  Cool, comfortable and dry.  Aside from being a mid-week game, it was perfect.

Going into this game, everyone expected, and Coach Harkes hinted, that he would be leveraging players from his bench and he certainly did that.  The starting 11 was almost completely made up of players who are not regularly starting games.  Nicholson was the exception as he has been in regular rotation since Berry’s quad strain injury.  The line up consisted mostly of regular subs that fans are used to seeing, Luke, Hoppenot, Stevenson, Mohamed, Spencer, and Cummings, but there were also some less commonly seen faces with Jaye, Dell, Lee, and Narbon rounding off the starting 11. 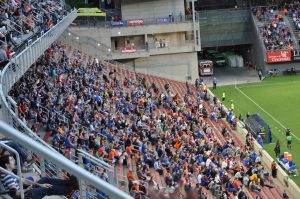 Despite this, the supporters turned out.  The Bailey was still filled well at around 75% capacity and they fully accepted this roster as soon as they donned the Blue and Orange and stepped onto the pitch.  They celebrated Mohamad’s birthday by singing “Happy Birthday,” and they easily adjusted to the change between the uprights by modifying their signature chant to “Jaye Says Nay!” For a midweek game that didn’t count towards league play and had very little marketing push from FC Cincinnati, the attendance was quite reasonable.  The official attendance was 8,668 which is pretty impressive for an Open Cup game.  Though the tarps had not been replaced, the stands didn’t look vacant and the stadium was lively and loud.

Even the visitors showed up with support, though this amounted to about a dozen supporters dressed in red and black who were quiet most of the match.  One exception noted below…..

When the game started, the home team came out strong in their usual high press fashion.  They lined up in what looked to be a 4-4-2.  Spencer and Cummings up top with Cummings a little more withdrawn and floating side to side.  Narbon took the holding mid position and Stevenson tended to press higher.  For the first 25 minutes, the Blue and Orange pressed hard with several really good opportunities.  Most of the play was in the visitor’s defensive third.  Spencer, Mohamad and Cummings all looking dangerous.  Cummings seemed to be everywhere.

Soon, however, the visitors started to find their legs and began to look more in control and threatening.  After several good chances for Indy, the Blue and Orange was looking a bit disordered and disorganized. 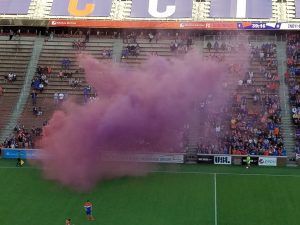 In the 36th minute, the game opened up when an FCC cross was brought down in the box deflecting off of Forrester’s arm.  The ref pointed to the spot and Cummings calmly stepped up and put the ball in the net.  But, the celebration was short lived as the visitors answered only 3 minutes later with a nice combination from Soto to Mitchell who tucked the ball in low past a diving Jaye.  The small quiet supporters group from Indy erupted, setting off a purple smoke plume 10 times the size of the supporters group itself.   Not to be outdone, The Bailey sang loudly in support of their team and ended by taunting the visitors and calling out “We can’t hear you.”

As the first half came to a close, the sides were tied up at 1-1 and the stats looked fairly even.  FCC had had a few more shots and had held the majority of the possession, but Indy had squared things up, looked scary on the counter, and had ended with the momentum on their side.

The second half started much as the first half ended.  Both sides getting chances as the ball moved end to end.

In the 57th minute, Coach Harkes began to adjust his side to try to gain an advantage.  His first change was to put McLaughlin on in place of Hoppenot.  McLaughlin had an immediate impact on the game.  With fresh legs, he opened up the left wing and caused issues with the Indy defense.  4 minutes later, Spencer worked a ball around the defense and crossed it to Cummings who strongly put a head to the ball in what looked to be the go ahead goal, but Schweitzer came up big for Indy with a massive save, punching the ball away.  McLaughlin, the rebound kid, charged in with speed and buried the ball in the back of the net, scoring his 3rd goal in as many games.

Coach Harkes made two more subs, bringing on McMahon and Tomaselli for Dell and Narbon respectively.  With Tomaselli entering the match, FCC moved to a 4-5-1 (or a 4-2-3-1).  Stevenson dropped back with Tomaselli as a pair of holding mids and Cummings tucked in with McLaughlin and Mohamad leaving Spencer as the loan target up top.  Though, the changes were defensive minded, FCC did not sit back and let Indy bring the game to them.  The Cummings, McLaughlin, Mohamad trio continued to press forward and rotated with each player freely moving from left to right to center never letting the defense figure out how to defend them.

The Blue and Orange kept the momentum for the rest of the game, with several good chances including one put in the net by Cummings that was rejected because of an offside call.  The game concluded with the good guys up 2-1.  The FCC defense was very stingy in the second half and only allowed 3 shots from the visitors.

There has been a lot of talk about how FC Cincinnati has a deep bench and this game demonstrated how valuable that was.  While the starters mostly rested and prepared for their next USL game this Saturday in Charlotte, the other players on the roster handled the Indy NPSL team well.  Almost none of the players on the pitch had played a 90 minute game this season and they certainly didn’t have the advantage of playing multiple games together to learn each other’s thoughts and tendencies.  Despite these handicaps, they looked solid for the majority of the game and advanced the team as expected to round 3 of the tournament.

The next Open Cup game will take place on June 1st at Al Lang Stadium in Tampa, Florida when FC Cincinnati takes on the Tampa Bay Rowdies, a second tier team from the NASL.  Play On!