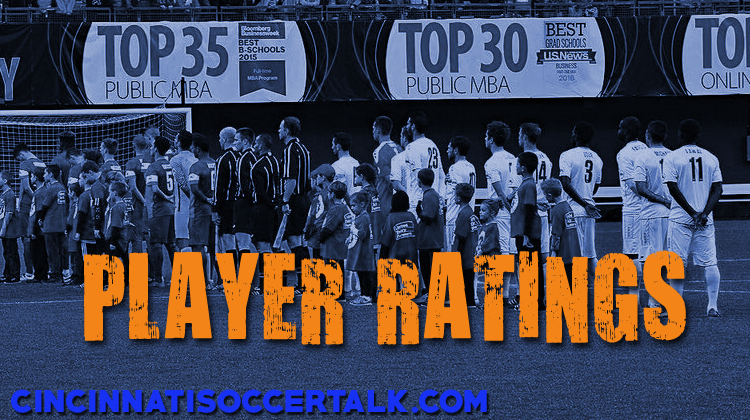 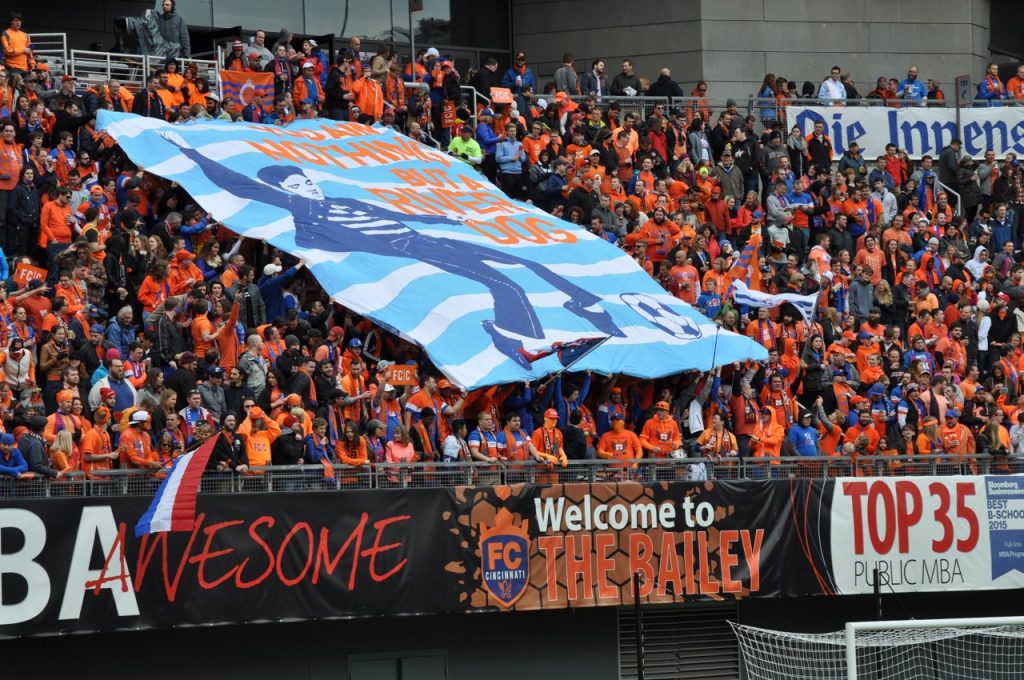 On a cold and windy afternoon, a USL record crowd of 23,375 showed up to watch FC Cincinnati claim its first clean sheet of the season defeating the Pittsburgh Riverhounds 1-0.

Coach John Harkes trotted out a similar starting 11 to most of their matches this year. Center Back Austin Berry was once again sidelined while Paul Nicholson took his place. Pittsburgh had a surprise in their starting 11 with Mauricio Vargas getting his first start in goal this season.

FC Cincinnati came out early trying to hold on to the ball and pressure Pittsburgh into mistakes via a high press that could lead to scoring chances. Without former Riverhound Romeo Parkes, Pittsburgh were thought to pack it in and work on the counter but in reality they tried to possess the ball early and work in the space opened up by the Orange & Blue defense. In the first 15 minutes that strategy almost worked when Harrison Delbridge and Mitch Hildebrandt were indecisive and allowed 2 scoring chances when the ball fell at the feet of a Pitt attacker. After 20 minutes FCC was able to get their feet underneath them and had several dangerous chances.

In the 27th minute Jimmy McLaughlin was able to get FCC on the board after a great pass from Sean Okoli. The play was set up by Paul Nicholson sending a through ball from the half line to Okoli then on to McLaughlin. Pitt keeper Mauricio Vargas made a great stop on McLaughlin’s first shot but the FCC winger picked up the rebound and hit the shot just inside the Pitt post. There were a flurry of chances before half by FCC but none were able to find the net.

Jimmy McLaughlin with the first goal of the match! FC Cincinnati leads 1-0 pic.twitter.com/giGScVSTvG

The Orange & Blue started off quickly in the second half with chances by Okoli & Wiedeman. In the 50th minute, Vargas made another tremendous play tipping a strike by Okoli just over the bar. Unlike the parts of the first half, Pittsburgh was unable to get much of the ball and had to rely on a limited number counter attacking opportunities, most falling harmlessly to Hildebrandt. In the 64th minute McLaughlin hooked up with Okoli to get in on the Riverhounds goal but the ball glanced just off the right post. Vargas contributed several more big saves to keep Pitt in the game, but neither team was able to find a goal with the score ending 1-0.

Coach Harkes had some strong words for the FC Cincinnati supporters after the match. He credited the crowd with “pushing the team on and gave them energy” Harkes continued “the guys got lifted up and it pushed us to victory.”

Mitch Hildebrandt (7)- The FCC keeper claimed his first shutout in net this season. After shaking off a couple of indecisive moments early in the game, Mitch assertive himself by taking the initiative claiming several dangerous crosses. His best moment came in the 28th minute when Kevin Kerr broke free on the left side of the goal. Hildebrandt came out with a diving challenge to turn away the shot while collecting a boot to the face.

Pat McMahon (6)- McMahon had the challenge of defending Drew Russell and Drew Hertzog for most of the night. He did allow Russell to get an open shot on goal in the 18th minute but kept Hertzog out of dangerous spots in the second half.

Paul Nicholson (7)- Nicholson has turned into a positive surprise following the injury to Austin Berry. He played solid in the back while providing a key through ball in the run up to the McLaughlin goal.

Harrison Delbridge (7)- The Aussie continues to be solid in back. He cleaned up several Pitt chances as the last line of defense and was dangerous on free kicks and corner’s getting his head on several balls.

Tyler Polak (6)- The left back put in a solid 79 minutes and made several crosses from the wing. He had a couple of corners of note especially in the 78th minute when his cross was nearly deflected into the Riverhounds goal by Nicholson then Okoli.

Ross Tomaselli (6)- Tomaselli had a silent but solid game for FCC. Commentator Paul Rockwood called the defensive midfielder an “unsung hero” on defense freeing up Walker and Bone to control possession for the majority of the match.

Kenny Walker (6)- Without much fanfare, Walker continues to be solid in midfield for Cincinnati. He set the tempo for most of the match and rarely loses possession of the ball.

Corben Bone (7)- Bone had another quality appearance, and with Tomaselli in the starting 11, was freed up to partner on the attacking front. He appeared to force a penalty when he was taken down in the box in the 34th minute on a clear scoring opportunity but it was not to be. He also provided some key service to the front three which was lacking against Harrisburg.

Andrew Wiedeman (7)– Wieda seemed to hit another gear in the second half creating several scoring chances. In the 56th minute he took a ball from the left in towards the center cracking a shot that forced the Pitt goalkeeper to make another strong save to keep the winger off the board.

Sean Okoli (7.5)- Another day and another match as a marked man by the opposing team. Even with all the attention by the Pitt defense, Okoli put together another strong showing and partnered with McLaughlin on the game winner. One part of his game that is underestimated is his work on the defensive side of the ball. His work in the high press wore out the away side and helped get the ball into dangerous spots in the second half. The striker’s grade might have been higher if he was able to put away one of his chances.

Jimmy McLaughlin (9)- My MOTM, McLaughlin was all over the field once again and you could feel his confidence grow as the match wore on. It wasn’t just his game winner that got him this grade but the precision on crosses and effort showed. His persistence frustrated the Pitt back line all day culminating in 2 yellows and multiple fouls on the away team.

Eric Stevenson (6)- The Columbus Ohio native had a tough act to follow replacing Corben Bone in the 70th minute. He got up the right a couple times but didn’t have a dramatic impact.

Derek Luke (6)- Luke played 11 minutes but wasn’t tested often on the left side. The left back was able to get up the pitch and helped kill the clock in the waning minutes.

Evan Lee (6)- The defender came in for Tomaselli in the 83rd minute. 3 minutes later he connected for a header off a corner that caught the Pitt keeper in a dangerous position.

Luke Spencer (Not Rated)- Spencer came in for Okoli in the 87th minute. He continued to push the ball up the field and killed the clock towards the end of the match.

Omar Mohomed (NR)- Mohomed came in the the final minute for Jimmy McLaughlin. His limited time did not merit a rating.