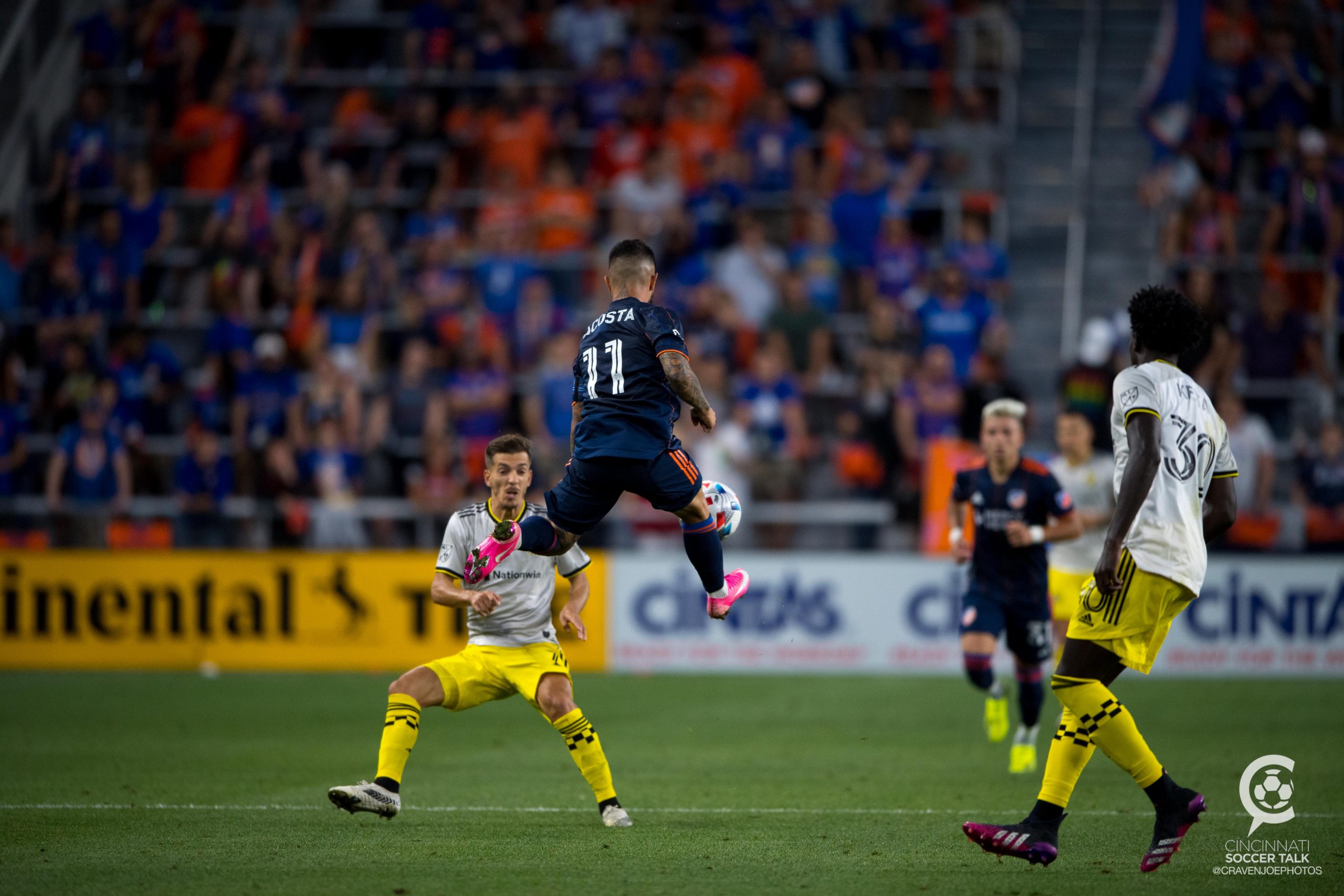 FC Cincinnati created few chances in Friday’s draw in the Hell is Real Derby. Nate Gilman looks at the lack of creativity and the substitutions used by coach Jaap Stam in the match.

The inaugural Hell is Real Derby at TQL Stadium couldn’t have gotten off to a much better start from FC Cincinnati’s perspective. A missile off the foot of Edgar Castillo in the first minute and a goal from Luciano Acosta just over 20 minutes later put the hosts two goals ahead and firmly in control of the match. After Harrison Afful’s second yellow card in the 42nd minute reduced Columbus to 10 men, victory looked all but certain.

However, at the end of the full 90 minutes, the point FC Cincinnati added to its season tally felt more like a loss than anything else. Emotions ran high the whole match, and the officiating (or lack thereof) was, and continues to be, a major talking point.

Now, a few days after the match, it’s worth considering what happened. Despite scoring two early goals in the first 25 minutes, FC Cincinnati was still the same team we’ve watched all season. Being up a man did not, and was never going to, solve FC Cincinnati’s attacking issues.

On the bright side, FC Cincinnati’s defense again limited shots and, for the most part, quality scoring chances. Unfortunately, Columbus scored one of its two quality opportunities, and, when paired with a banger of an opening goal from Lucas Zelarayán, the 2-2 scoreline was largely justified.

Lack of Creativity On Display, Especially After Going Up A Man

All season, FC Cincinnati has struggled to get the ball into dangerous areas and to consistently create scoring chances when they’ve controlled possession.

After Afful’s dismissal for a second yellow card in the 42nd minute, FC Cincinnati managed eight shots while Columbus produced seven. The quality of those chances is the real story. FC Cincinnati created basically zero quality scoring opportunities when it was up a man. Columbus sat deep and made FC Cincinnati break them down, something the Orange and Blue have struggled to do all season.

Unlike most matches in 2021, FC Cincinnati possessed the ball in dangerous areas of the field. According to Football Reference, Its 199 touches in the final third and 35 in the opponent’s penalty box were both nearly season highs. However, FCC still seems to lack repeatable patterns of play to create shots in and around the box. Too often in the final third, the extent of FCC’s attacking plan seems to be to give the ball to Luciano Acosta and let him figure it out.

On Friday night, that plan worked well — until it didn’t. Acosta dominated the ball, leading the team in touches, passes attempted and passes received on top of contributing a goal and an assist. He was FC Cincinnati’s primary method of pushing the ball into the final third and the penalty area, completing six of FC Cincinnati’s 10 passes into the penalty area. However, Acosta’s omnipresence on the ball and willingness to try to make things happen resulted in nine losses of possession, most on the team.

FC Cincinnati’s lack of an attacking Plan B continues to hamstring the team’s attacking play.

One positive was Brenner’s continued growth in the attack. Brenner’s 12 touches in the attacking penalty area against Columbus were not only a season-high but also double his previous high. He also provided an effective outlet in the build-up, receiving a season-high number of progressive passes. However, Brenner ended the match with just two shots. Establishing attacking patterns of play that get Brenner the ball in positions to shoot should be a priority for coach Jaap Stam and his staff.

FC Cincinnati’s starting wingers, Isaac Atanga and Álvaro Barreal, struggled to make much of an impact. Both players appear to be most comfortable with the ball at their feet, driving at opponents in space. As Columbus sat back defensively, Atanga and Barreal struggled in the more congested areas of the field. Also, because Stam inverts his wingers, Barreal and Atanga struggle to provide the width offensively that could have provided FC Cincinnati with another option against a defense sitting deep and narrow.

FC Cincinnati’s depth, or lack thereof, impacted the match as well. Despite being up a man and up a goal, Stam brought on Brandon Vazquez and Franko Kovačević in the 73rd minute, replacing Barreal and Atanga.

Fatigue surely played a factor in Stam’s decision to sub off his starting wingers, but the introduction of Kovačević and Vazquez necessitated a change in how FCC could play. Vazquez replaced Brenner as FC Cincinnati’s center forward, shifting Brenner out to the left side of FCC’s attacking trio.

In contrast to previous matches, Stam opted to stay in a 4-3-3 rather than subbing on a center back and switching to a more defensive shape to try to see out the game. Moreso, Vazquez and Kovačević should both be expected to thrive in a system with more direct play, like the 3-5-2 Stam has utilized previously when trying to kill off a game.

If Stam had taken the more defensive approach and sat deeper with three center backs, Columbus would have had to push for an equalizer, potentially leaving space in behind for Vazquez and Kovačević to counter.

However, after Columbus equalized through Miguel Berry, FC Cincinnati had to chase a result. Because of the previously made changes, that push happened with Brenner playing out of position and without two of its liveliest attacking players.