Brad Gough breaks down Toronto FC’s goal and the inability of FC Cincinnati to get one of its own in Sunday’s 1-0 home loss.

In a vacuum, FC Cincinnati’s 1-0 defeat to Supporter Shield contenders Toronto FC doesn’t look too bad. However, on the back of three straight defeats and four matches without scoring a goal, fans are starting to grow frustrated. A lack of movement in the offensive third is causing the FCC offense to stagnate. Looking at the goal Toronto scored and comparing it with an offensive set for the Orange and Blue illustrates the problem

The goal that Toronto scored against FCC was not an amazing piece of buildup play or a transcendent bit of skill. In fact, it was a pretty straightforward run in behind the defense followed by a cutback pass. However, the Toronto players’ movements in the final third caused the Orange and Blue defense confusion.

The move started with creative midfielder Alejandro Pozuelo with the ball on the FCC left flank. Pozuelo is a central midfielder, so having him pulled wide gave the Reds an extra body in that area of the pitch. Mathieu Deplagne moved to pressure the ball, leaving Haris Medunjanin matched up on the much faster Toronto right back Richie Laryea. Deplagne failed to pressure Pozuelo to the inside (yellow), and Laryea easily sprinted past a lackadaisical Medunjanin to get in behind the FCC defense. Central midfielder Jonathan Osoria pressed toward the FCC center backs, creating another target for them to worry about. 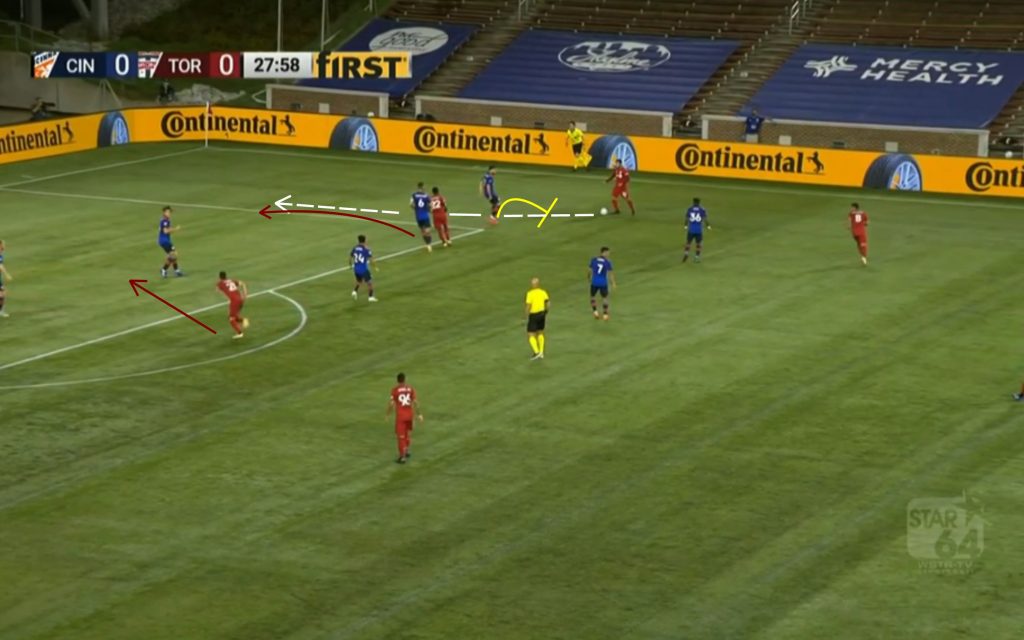 With Laryea in behind, Nick Hagglund moved to stop the ball. This should have caused Maikel van der Werff to shift onto the newly positioned Osorio and Saad Abdul-Salaam to shift over and mark center forward Patrick Mullins. Alvaro Barreal was left to sprint back toward the wing to cover the back post. Frankie Amaya, having lost track of Osorio, tried to make up for his poor positioning with effort, by heading straight toward the ball (yellow circle). 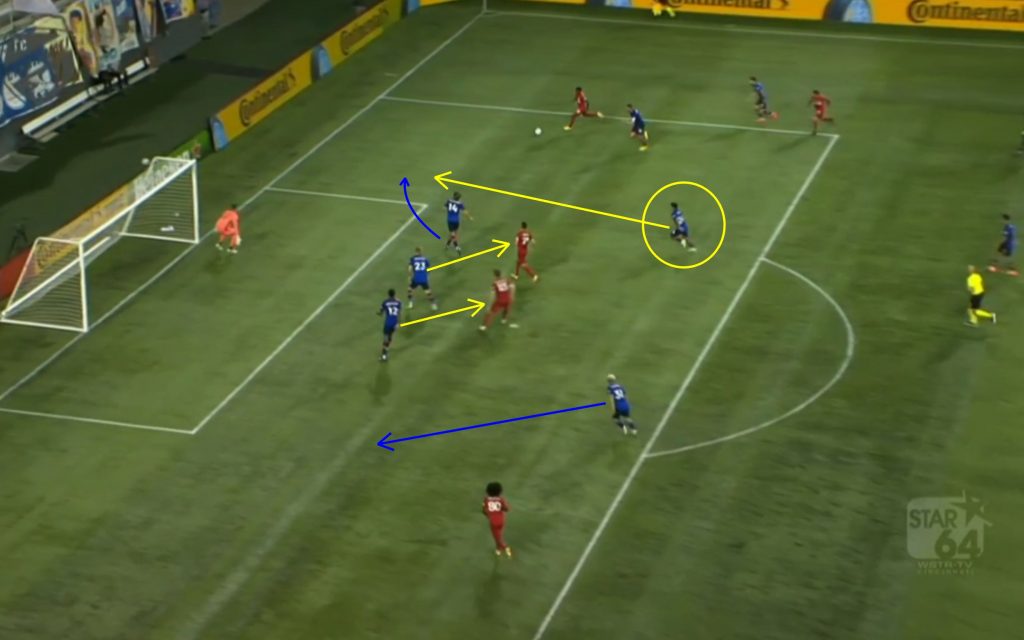 With five FC Cincinnati players all watching the ball from six yards or closer, Laryea cut the ball back to Mullins, who had pulled away from the crowd. Abdul-Salaam should have gone with him, but the various and dynamic runs from Toronto confused the right back. Goalkeeper Przemyslaw Tyton slipped at the near post, and the unmarked Mullins powered his shot home easily. 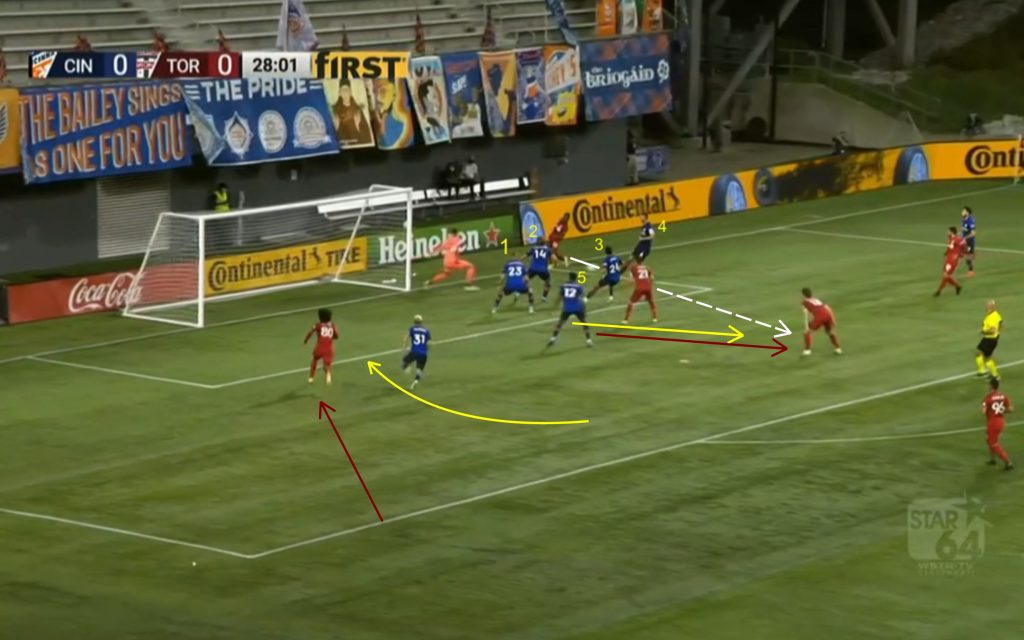 The goal illustrates how difficult it is for defenses to maintain concentration, pass runners, and mark players effectively when they are moving dynamically in the attack. Central midfielders floating wide or pressing toward center backs, outside backs making runs from inside channels and center forwards peeling back into positions typically occupied by midfielders create chaos, and FCC didn’t deal with it effectively in this instance.

Throughout the first half, FC Cincinnati was plagued by ponderous and uninspiring play in the middle and offensive thirds. The situation outlined below was not uncommon.

Here, Amaya burst through the midfield on the dribble and had space to pick his head up. The Toronto defense was packed tight, and the passing windows were small. However, one way to make passing windows larger is to move in and across them, pulling defenders out of position as you go. Barreal stood in one window, with Brandon Vazquez behind him occupying the same passing lane. Yuya Kubo walked in front of the defense, and Joseph-Claude Gyau was not an option out wide. 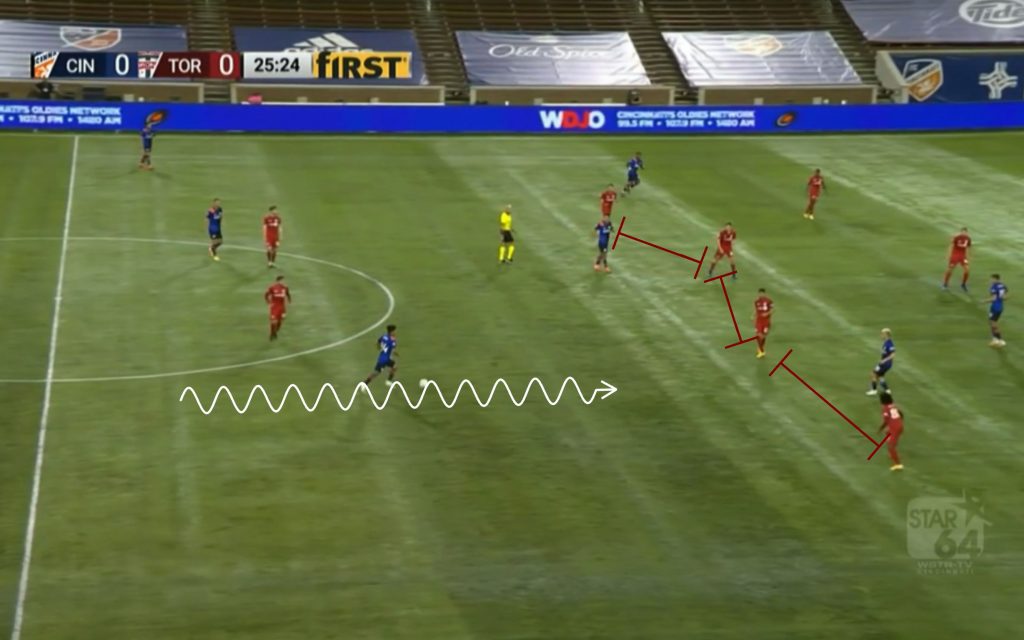 With no movement and nowhere to play the ball, Amaya cut it to his left and passed to the trailing Deplagne out wide. There were gaps in the Toronto lines (green), but no movement to help get the ball into them. 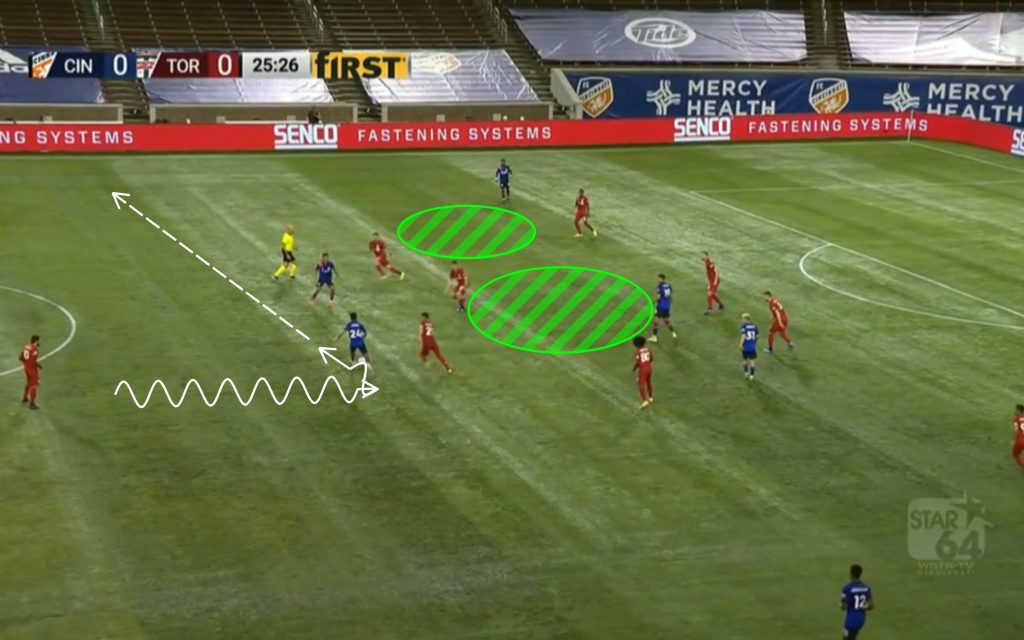 Deplagne played the ball forward to Gyau, with two Toronto players moving to close the dangerous winger down. Deplagne stayed where he was, offering modest support, and Kubo floated behind the Toronto double team, unable to get the ball from Gyau. Vazquez and Barreal stood idly by the Toronto center backs awaiting a potential cross.

At least three dynamic options were present, any one of which could have caused the Toronto defense problems. Deplagne could have made an overlapping run, allowing Amaya to move into a supporting position and forcing the defenders to make choices as to whom they were going to cover (yellow). Kubo could have made a simple corner run, pulling at least one Toronto defender out of the center and giving Gyau the option to pass forward or backward (orange). Or, Vazquez could have checked from his forward position, creating an overload and a potential combination play with Gyau or one of the other FCC players in the vicinity (red). 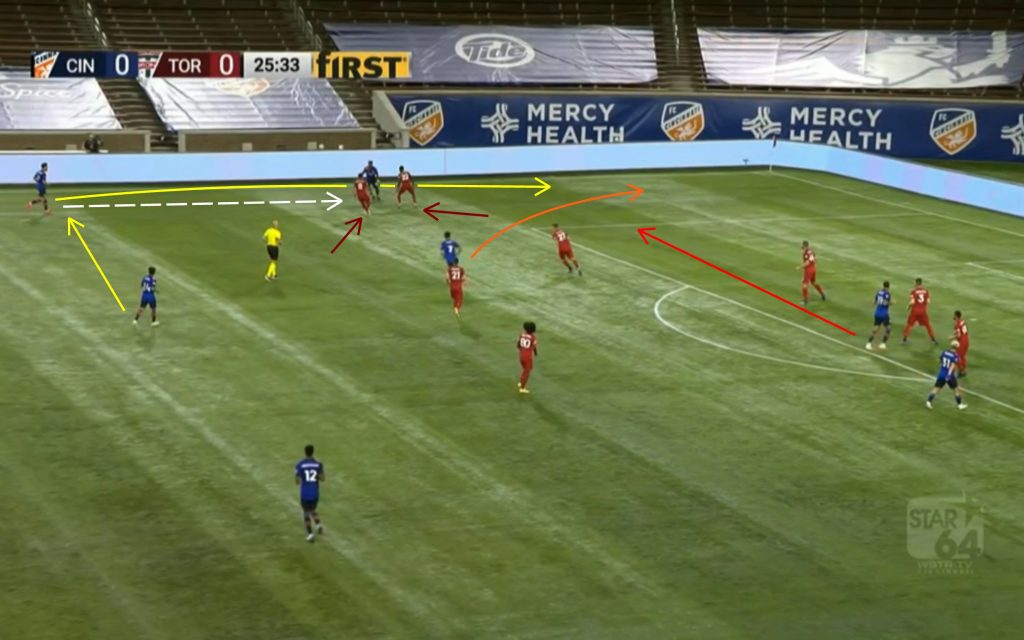 Instead, none of these runs happened, and Gyau was forced to cut back to Deplagne. Deplagne then found the floating Kubo, who was not in space and not facing forward. Kubo had to turn with the ball under pressure and try to find a pass. 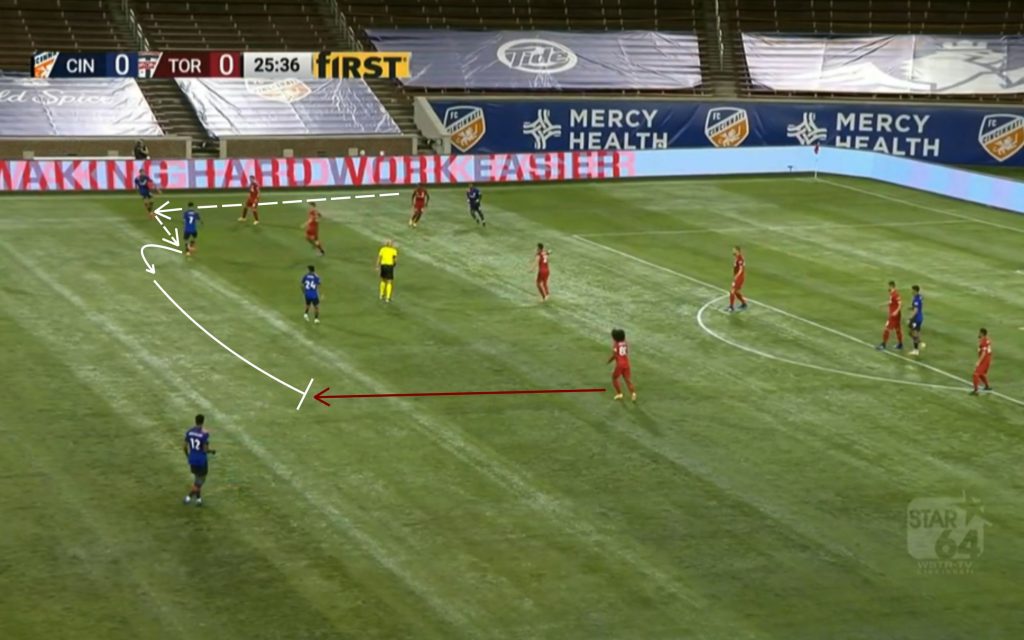 As it stood, Kubo played an errant pass that was easily picked off by Toronto. In yet another case of failed movement, Amaya could have dropped into space (yellow) giving him the option of receiving the ball and finding a streaking Deplagne or Abdul-Salaam (green). 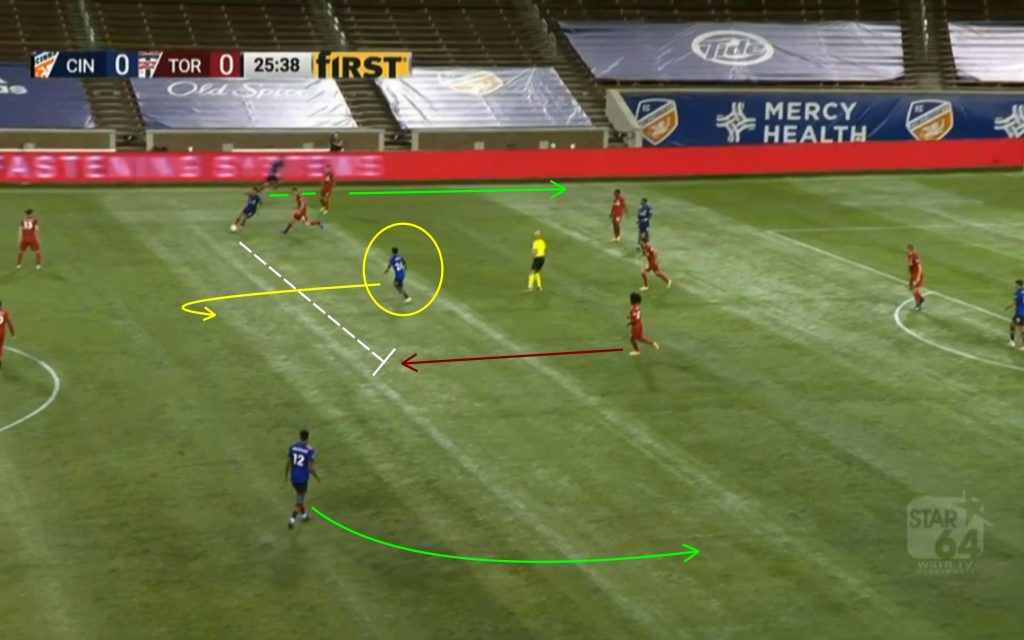 But that second half…

In both the first and second halves, Toronto out-passed FC Cincinnati by roughly the same amount (around 35%). However, in the first half, Toronto also had 35% more passes in the final third, seven more crosses than FCC, and outshot the Orange and Blue 5-4. In the second half, those fortunes changed. FCC limited their final third passing deficit to 16%, only trailed Toronto by three crosses, and actually had one more shot than the Reds. So this begs the question: What changed?

At the half, coach Jaap Stam introduced Siem de Jong and Kamohelo Mokotjo. Mokotjo swapped in the midfield for an underperforming Amaya, and de Jong settled in at the 10, pushing Kubo to the wing and Gyau to center forward. This change allowed a few things to happen that greatly increased the movement for FC Cincinnati in the offensive third.

First, Kubo moving to the wing allowed the team to get the best out of the Japanese international. He combined well with left back Andrew Gutman and often dropped in, allowing Gutman to surge forward down the flank. Second, Gyau as a center forward provided a much different presence than Vazquez. Gyau constantly went looking for space, popping up on the wing or in the midfield to get on the ball. This did not allow the Toronto center backs to easily mark him out of the match. This movement also provided the vacated space for de Jong to press into, giving those center backs something else to think about. Finally, Mokotjo simply plays faster than any of the other FCC midfielders. He is constantly looking to play one-touch passes, and when he does take a second touch, the amount of time between touches is lightning quick. He sets a different tempo for this team, raising the speed of play for the entire group.

It is always difficult for a team — and fans of that team — to experience a run of losses. On the back of a poor run of form, this Toronto match didn’t seem to provide any positivity. However, if you isolate this match, losing 1-0 to an extremely good Toronto FC side is not a terrible result. Moreso, if you look at the improvement from the first to the second half, you’ll see that Stam has ideas of how to improve this team and may just be getting the players fit that can help him to do it.

Tune into the latest Talking Tactics with Coach Gough Podcast as Coach breaks down the Philadelphia Union and Minnesota United losses!