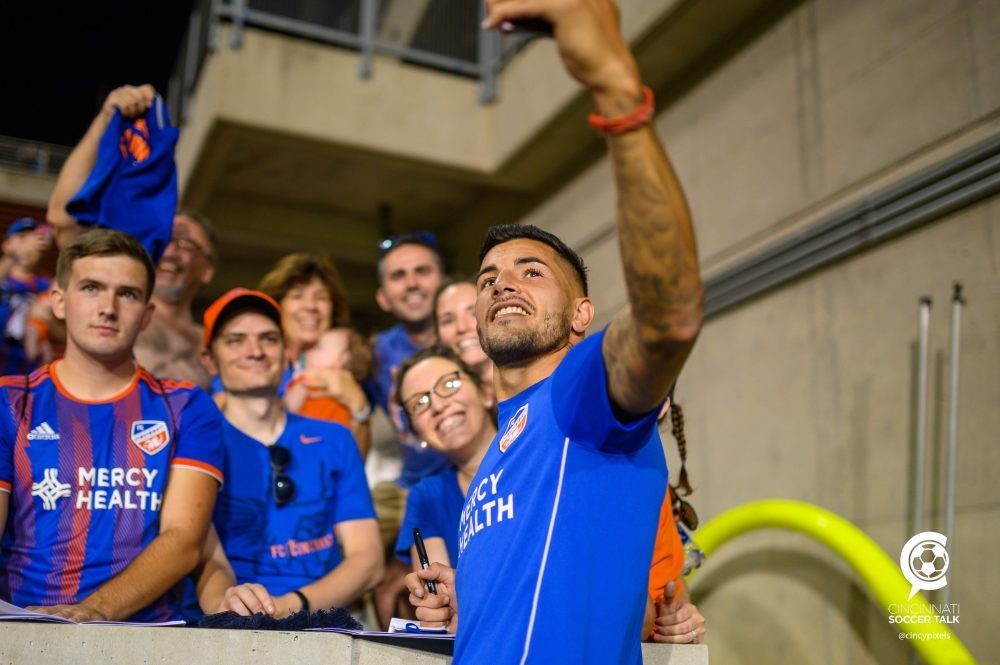 Now that we know Ledesma will not be part of the 2020 roster, is this the right move? Should something more have been done to keep Ledesma around? Our staff put their feelings into words.

Emmanuel Ledesma has been a vital part of FC Cincinnati in the last couple of years. He joined in 2018 and was named the USL Most Valuable Player of 2018. He put up 16 goals and broke the league record with 16 assists. In the 2019 MLS season, he put in six goals and added another five assists. Despite being one of the club stat leaders, the 2019 season was poor, and fans clamored for change. That change swept in new ideals and a new style of play. FC Cincinnati ownership wanted to get better in the attack, and that means bringing in new pieces. It cut Ledesma by not renewing his option and offered him a new (rumored lower) contract. Ledesma, who has produced for two straight years, felt he was worth more.

Not only was Ledesma invaluable on the pitch the last couple years, he was a fan favorite. He stayed after the match until no one was left asking for autographs. He blew past his Union mandated appearances and went above and beyond to connect locally. Now that we know Ledesma will not be a part of the 2020 roster, is this the right move? Should something more have been done to keep Ledesma around? Did FC Cincinnati overreact on a rebuild and are chopping away culture for results? Are you sad? We ask our staff to put their feelings into words because it is hard to think about Ledesma and not feel something.

There is so much to say. Ledesma is — was — my favorite player to ever wear the orange and blue. I often ran into him and his family at Kroger and they couldn’t be kinder. They really set roots in Cincinnati and it was nice to see him in the neighborhood and wish him luck before the weekend’s match. And it’s easy to overlook now, entering the second season in MLS, but his 2018 season was incredible. He was the league MVP for the regular season champions.

I’d argue there hasn’t been a better single-season performance from a professional athlete in Cincinnati this decade, at least since Votto won his National League MVP. He represented Cincinnati sports in the best way. But my favorite Ledesma story is when he stayed in Cincinnati instead of attending his father’s funeral in Argentina. His dad never got to see him play. He begged Jans to put him in as a substitute if he got the chance and when losing 5-0, he did. He got a penalty and buried it, showing his emotion and dedicating the goal to his father. Ledesma cares and I’m sad to see him leave.

I understand why he did, and why the front office made their decision. I can understand it objectively; it was probably the right decision for both parties. FCC will find other players to fill his role and replace his production, but no one will ever be able to replace his heart. I only hope the best for Manu, and that he brings glory and his love for the game to another club very soon.

As much as it pains me to say this, it’s probably best for both parties to move on. Manu will always have a special place in this club for what he accomplished the past two seasons. I will always remember that special moment in Harrisburg when he brought that fan onto the pitch after the game and Manu got the whole team to take a photo with him. He was a class act and was great to all the fans. I hope he finds success somewhere here in the US or abroad.

You can call it sentimentality, I call it good business. In my opinion, there was 100% a role for Emmanuel Ledesma in 2020 at FC Cincinnati. His six goals and four assists in a largely supporting role should have earned him a return. I understand if there was an impasse with wages. We all want more, but I believe it will take a player on higher wages to replicate this success in a like-for-like manner. Manu would not be a starter in 2020, but 200-250K in wages is good enough for a creative player and club legend to stay in a bench/spot star role.

In the long run, this could be a good move should the club find a diamond-in-the-rough, but that is harder said than done. Do we believe that Joseph-Claude Gyau and Frankie Amaya can cover for this production? We will find out soon! Good luck to you Manu. I wish there would have been a better send-off for you. You deserved it. This is a business and I know you need to look out for yourself. Just disappointed both sides couldn’t come together for a great and VALUABLE deal for the player, club and fans.

My wife is inconsolable over this move. I’ve tried to break it to her slowly over the last few weeks but her favorite player moving on is still hitting hard. I myself love the guy, he’s a great player, his animated play style and attitude on the pitch is fun to watch, and he treats every fan as a close friend. I’m often one of the later media members leaving Nippert and more often than not, see him still signing autographs and taking selfies when all the other players have left. One of my favorites was seeing a team employee standing out with him while he was signing autographs and then literally pulling him away towards the locker room and Manu broke away and signed two more before going with her. On the field, his goals and assists record earned him USL MVP of 2018 and was a huge factor in FCC’s record year. I hope there is something that can be worked out in the future to bring him back, perhaps with the academy.

Emmanuel Ledesma was, in my opinion, unquestionably the key to FC Cincinnati’s 2018 Supporter Shield run in the USL. Ledesma is the kind of player that will always be a fan favorite in Cincinnati. He’s not the biggest, strongest, or fastest, but he works hard at his craft on and off the field. Add to this the fact that he loves to interact with fans and you have yourself a key piece to any roster — in the USL. The fact of the matter is that once teams hit the top level in their respective sports, be it football, basketball, baseball, or soccer, hard work is often just not enough.

A player with tons of skill and determination will always have a hard time winning consistently against opponents with vastly superior athletic traits. Furthermore, the rigorous schedules and media relations rules even make interacting with fans more difficult. Ledesma is, and always will be an important part of FCC history. And, I think he could have continued his run with the team if he was willing to take on more of a back-seat role. However, his departure from MLS will allow him to do what he does best: put a franchise on his shoulders and dominate on the field and will also allow FCC to fill his roster spot with a younger, more athletic, and probably less expensive option. Thank you, Emmanuel, for what you’ve done for our city, and good luck with the rest of your career.

Manu is no doubt my favorite player to ever don the Orange and Blue. His impact on the field will be felt by fans forever. His love of the game and this city will never be forgotten. I will never forget how you treated me and my family after every game. You were the nicest to my kids and the advice you gave them in soccer is something that will stick with them forever. We can’t thank you enough for all that you did for this team and city. You deserved to make the jump to MLS and I was thrilled to see the impact you made on that team. While I wish you were coming back for the 2020 season, I understand the business aspect and the player aspect as well. Both sides needed to look out for themselves and it’s a shame we couldn’t give you the proper send off! Best of luck to you and just know that you are truly loved by this fan base. Thank you so much for giving me some of the best sports memories. You will be missed!