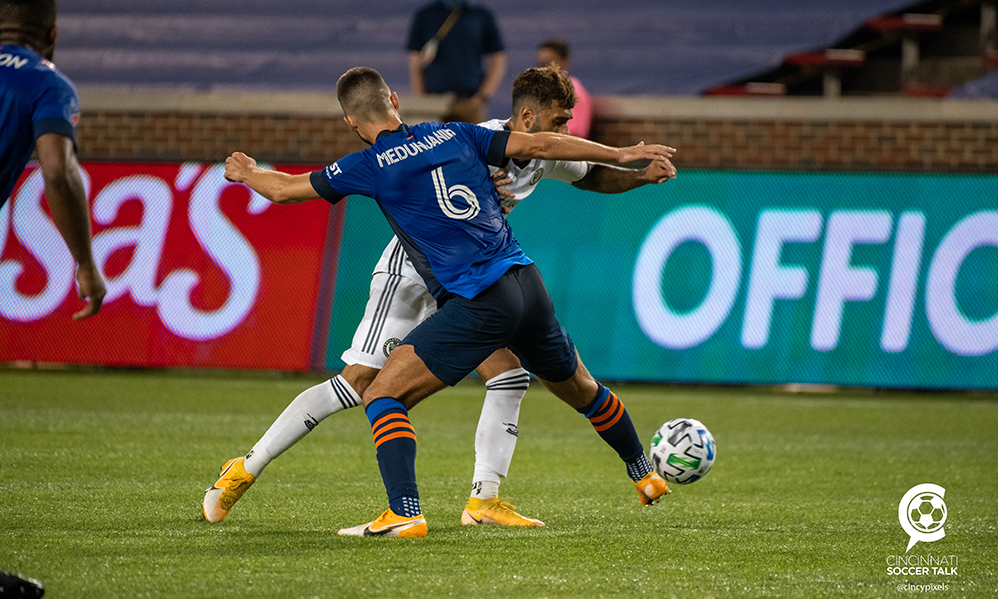 Since drawing the Union two weeks ago at home, FC Cincinnati has lost two straight on the road and makes the return trip to Philadelphia on Wednesday.

Two weeks ago at Nippert Stadium, FC Cincinnati frustrated the Philadelphia Union — one of the better teams in the Eastern Conference — in a scoreless draw.

Since then, it’s the Orange and Blue who have been frustrated, with two road losses. They go back on the road Wednesday for a midweek match at Subaru Park. Kickoff is at 7:30 p.m.

FC Cincinnati (3-8-4, 13 points) suffered a blowout loss at New York City FC and most recently sustained a self-inflicted loss at Minnesota United on Saturday despite a tactics shakeup from coach Jaap Stam. The club has tumbled to 12th in the Eastern Conference standings, just two points ahead of D.C. United and expansion side Inter Miami CF, and the distance from the playoff line is increasing.

Philadelphia (8-3-4, 28 points) sits fourth in the East. After leaving Nippert, the Union posted a 3-0 victory over Miami behind goals from Kacper Przybylko, Ilsinho and Brenden Aaronson and fell 2-1 on Saturday at Toronto FC.

Here are three things to watch in the match:

Expect Stam to stick with the reinstalled 4-3-3, his preferred formation and one not used since his first match to open MLS is Back Tournament group play.

After spending some time in a 5-3-2 and a 3-4-3, Stam switched back at Minnesota. Despite the new goalless streak extending to 275 minutes, Stam liked what he saw on Saturday and said his club should have got more out of the game.

FC Cincinnati once again conceded early against Minnesota when Mathieu Deplagne’s foul of Chase Gasper in the penalty box led to a Kei Kamara penalty kick in the 16th minute. As difficult as it is for the club to score presently, the margin for error is razor thin.

Kamohelo Mokotjo made his much-anticipated FC Cincinnati debut on Saturday, subbing on in the 89th minute. Is he up to speed enough on what Stam wants to start on Wednesday, or will Stam increase his minutes gradually? And what impact will this have on the club’s midfield, especially with Haris Medunjanin?