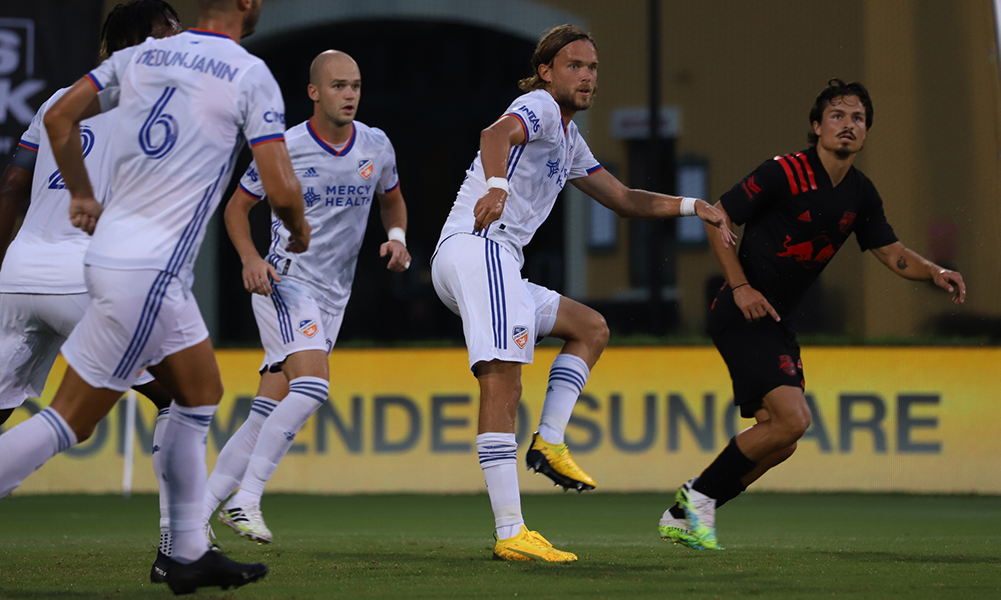 FC Cincinnati plays the Portland Timbers on Tuesday in the MLS is Back Tournament Round of 16.

After moving onto the MLS is Back Tournament Round of 16 thanks to placing second in Group E, FC Cincinnati will be facing off against the Portland Timbers at 10:30 p.m. Tuesday.

Portland’s story to the next round had the team placing first in Group F, which also consisted of Los Angeles FC, the LA Galaxy and the Houston Dynamo. The Timbers had two straight wins to open the tournament, which were against the Galaxy and then the Dynamo, both ending at a score of 2-1. The team’s last match was against LAFC, one of the most impressive in the tournament, even without 2019 MLS MVP Carlos Vela. It looked like LAFC was going to be FCC’s opponent, but an 81st minute goal tied it at 2-2 and saw Portland winning the group.

Portland’s time in the MLS is Back Tournament has seen multiple players excel, as Jeremy Ebobisse has three goals in the three games, while Sebastion Blanco has tallied three assists.

According to the Portland Timbers page on WhoScored.com, the strengths of this Portland Timbers team are attacking through the middle and playing through the back. It also states that a weakness of the Timbers’ defense is defending the counter-attack. These three aspects will specifically come into play during the match between the two clubs.

FCC will most assuredly continue the way it played against the Red Bulls. It will look to defend like its life depends on it, which it does. FC Cincinnati will be trying to defend all of the shots from Portland and hope a counter-attack opens up. As the above stats from Portland’s players and WhoScored indicate, this will be a much tougher task than New York. Portland’s attacking prowess is much higher and more talented as well. The likes of Ebobisse, Blanco, Diego Chara and, obviously, Diego Valeri are all on the attack, which will mean more difficult attacks to defend.

However, as also mentioned above, this might also lead to strong counter-attacks. Allan Cruz is available for selection, and Jurgen Locadia is listed as questionable with a quad injury. These potential offensive reinforcements might level up in potency. The amount of defending FCC will do means it will need to capitalize on every offensive chance it gets.

FC Cincinnati will need to use each part of the lineup to its potential. FCC was only able to get to the knockout round because each positon group knew what it needed to do and executed it perfectly. The whole lineup knew where to be, and the backline was perfectly in place, especially Kendall Waston. Waston was commanding and showed why FCC has so much faith in him. These types of matches are why FCC paid so much to get him.

■ FC Cincinnati front players against the Portland Timbers backline – FCC will need to capitalize on every attacking chance it can get, whether it is from Adrien Regattin, Yuya Kubo, Locadia if he plays or Brandon Vazquez. That’s not even making shots count. Hold-up play from the forwards will be essential to making them count because there will most likely not be a lot of players in front of the ball when it gets to the forward. This is where Locadia’s return would be most evident, as he is the team’s most talented attacking presence.

■ FC Cincinnati fullbacks against the Timbers wingers – One of the reasons FCC beat the Red Bulls was because it was able to stay narrow and limit the passing lanes. The area where this can be monumentally changed is how wide the offensive players get. The Portland wide players will dictate how this game plays out. If they try to stay wide, stretching the FCC defense, it will allow the midfielders to have wider passing lanes and get better chances with more room in the danger zone.

■ Jaap Stam against Giovanni Savarese – FC Cincinnati coach Jaap Stam had a good coaching performance against New York’s Chris Armas in his previous match, and now he will be going up against Portla’s Giovanni Savarese. Expect Stam to roll out the same style of play as we saw the last match. That match went smoothly, all things considered. FCC scored in the first half and didn’t face many dangerous attempts on goal. That could be very different Tuesday, and the defense will need to be even more in-sync and talkative about what’s happening. That extends to Stam and knowing how to respond to possible substitutes, changes in attacking directions or tactical changes should the game open up.